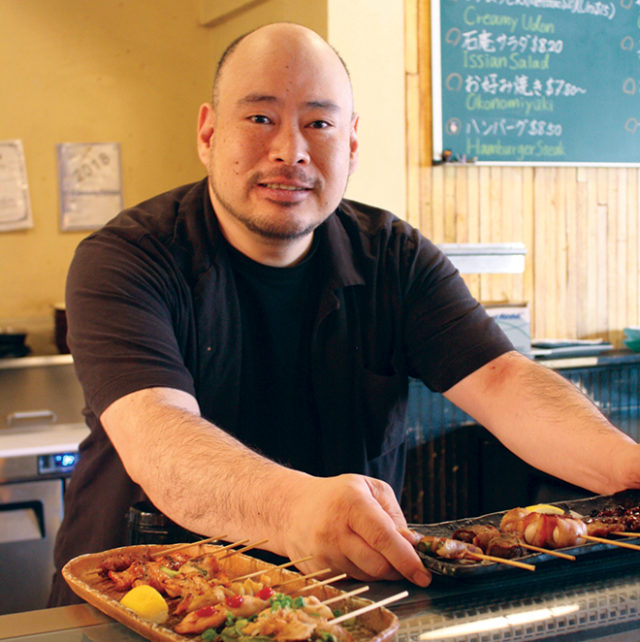 There are quite a few Japanese restaurants dotting 45th Street in the Wallingford neighborhood. Along that route, Issian, Ramen Man and Kokkaku are all operated by Yuta Sugimoto. The large, heavy-set Sugimoto has a friendly aura and is affectionately called “Sugi-chan” by his regulars. The three restaurants are part of the Safari group of restaurants headquartered in Osaka. Sugimoto operates the three as the president of Safari USA.

Issian on 45th opened in 2008. “The concept for Issian is a Japanese neighborhood izakaya. There’s sushi, yakitori, okonomiyaki — delicious dishes are served at inexpensive prices. Lately, as prices rise in Seattle, it has been a challenge, but we continue to follow that concept,” Sugimoto says.

The prices at Issian are extremely reasonable. Sugimoto and his staff grill the dishes right in front of you, a rarity in Seattle. The draft beer goes down smooth, and people of all walks of life from the Wallingford area — students, couples, families — come here to share plates and enjoy themselves just like in a Japanese izakaya.

Sugimoto spent his high school and college days in Canada. He became a fan of Canadian football. “When I returned to Japan, I thought someday I will return to that wide open Canada,” he says. After graduating from university, he worked in hospitality for a large Japanese hotel group and eventually became a restaurant manager. After that, he took a job doing overseas manufacturing management in the apparel industry, but at the invitation of his friend and then Safari USA President Yuuki Tanaka, he returned to the restaurant business. He managed a kushiage restaurant in Pontocho Alley in Kyoto, then took over the North American operations for that company. “I am a service industry man,” Sugimoto says. “I like direct contact with the customer.” The next restaurant he opened, Ramen Man, serves baitan (a rich chicken) broth that has proven popular with the Wallingford crowd. Kokkaku, opened in 2017, features Sugimoto’s favorite food: beef, arranged in a variety of delicious Japanese-style dishes.

Read this article in Japanese：