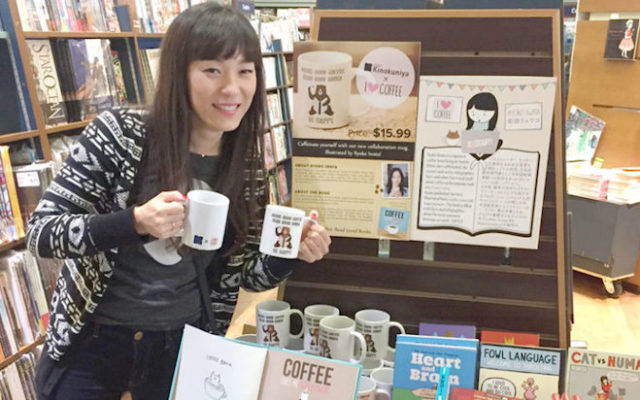 Seattle-based coffee blog “I Love Coffee” has become an international hit, and the book has been a bestseller in the US. A Japanese translation was released this February. Called by critics the most famous coffee lover in the US, Ryoko Iwata sat down for a chat with North American Post.

I hated coffee at first. Before I came to Seattle, I hardly ever drank it. I was like, why does this taste so bad? But once I got to Seattle, I realized that “Let’s go have coffee” was the American version of a friend in Japan saying “Let’s go drink ocha.” Everyone was drinking coffee, and here I was the only one drinking tea, getting my hot water and tea bag. It was so humiliating! (laughs) That’s when I decided, OK, I’ll drink coffee. After all, I’m in Seattle.

The reason I started the coffee website was that since everyone drinks it, I thought everyone could relate to it. Before I launched the site, I thought for several months about what would be a good theme. A friend said, “Why not do a site that talks about visiting different cafes?” But that might only appeal to people who live near the cafes I choose. Instead I went with a more universal theme of talking about coffee through a wide variety of subjects. That way, people around the world could enjoy it.

I wasn’t a barista or a bean trader or anything like that. Writing from the perspective of your average coffee drinker seemed to work. Coffee is complicated, isn’t it? Beans and roasting styles and so on. There are many pro-types who can speak the specialized lingo. I wasn’t a true coffee maniac; my interests are wider and looser. In the end, there are more people interested in that sort of approach.

I explain difficult things in a simple way

I studied Japanese-language education through graduate school. I came to Seattle as a Japanese-language education specialist. Working as an educator in the US, I thought of ways to communicate difficult concepts in a simple way. I get a lot of my story ideas from college theses and news stories. But even if something is interesting to me, if I explain a complicated topic in a complicated way, it won’t be interesting to anyone else. I wanted to make something that could be immediately understood.

I learned the basics of programming and Illustrator at Bellevue College. I chose an infographic style where pictures connect with words. It’s a technique that uses visuals like illustrations or charts to impart information. It was picked up by the big American media site Mashable, and then all sorts of media followed. Before I knew it, the site was famous. The site has an English and Japanese version, but the English site is overwhelmingly more popular.

I was very lucky to get my book published. An American editor who saw my site reached out to me. When you put a book out, typically I hear that you have to bring it to publishers, and there are all sorts of difficulties along the way. In my case, they came to me. The Japanese version was the same. A friend of mine had my book in a Shibuya coffee shop, and coincidentally, a Japanese editor saw it and ended up asking me if I would do a Japanese version.

Connections with people are so important. Getting picked up by a big site and getting my books published were all achieved by accident. Without me even knowing it, all these people came to my aid. I have been very lucky with work.

My luck is all in my career, but not at all in my private life. I used to lie in my bed by myself and wonder how I could sleep all alone in that big bed. But lately I don’t think that way. Instead, I get in my bed and sleep in it diagonally (laughs). There’s no room for anyone else! So I’m having fun.

Seattle and Starbucks were the starting point of coffee’s second wave. The rainy, cold climate calls for a robust, deep-flavored coffee. The third wave features lightly roasted, bitter coffee that is suited for sipping in a café. I just like Seattle style. It’s the first place I learned about coffee, and it reminds me of the teahouse culture in my hometown of Nagoya. Sitting in a comfortable café drinking cups of drip coffee. That is when I am most relaxed. Seattle’s coffee culture connects me to my roots.

The strange thing is that I hated coffee, and now it is my job – I’m all about coffee. It’s gone pretty well for something I didn’t like. I don’t get feverish about this; I can see things objectively. I think coolly about what people want and put it out there. I love writing and drawing. I plan to return to Japan for a while and study Japanese taste. Next, I want to publish a new book in Japan.

Ryoko, an illustrator, writer and blogger was born in Hyogo Prefecture and raised in Nagoya. She studied Japanese-language education at the University of Colorado graduate school. From 2009, she has worked as a Foreign Ministry information officer at the Japanese consulate specializing in Japanese-language education. In 2012, she started her I Love Coffee blog. Today, she’s a leader in all things coffee with a base in Japan. Lately, she likes buying beans at the Lighthouse Roaster in Fremont and brewing coffee with an Aeropress.

Interview with Ken Taya aka ENFU