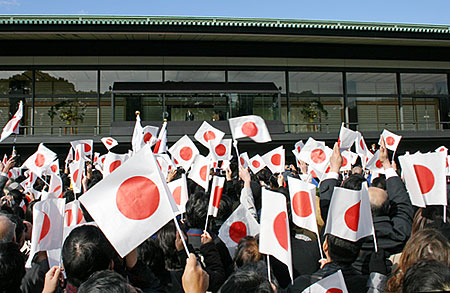 April 29 is known as Showa Day. The holiday is meant to celebrate the birthday of the emperor who presided over the 63-year-long Show Era. It’s one of the holidays in the extended Golden Week holiday period. When the emperor died in 1989, the new era was called to Heisei. To honor the late emperor’s work as a biologist, April 29 became Greenery Day (Midori no Hi). In 2007, it was changed back to the name we use today: Showa Day.

At the end of 2016, current Emperor Akihito announced his desire through his will to abdicate due to his waning physical strength. The Cabinet endorsed the abdication and the ascencion of the present crown prince in 2019. This was big news in Japan. Most companies will have to print new calendars and notebooks, update computer systems and take other measures to prepare.

Many countries and regions use calendars different from the Gregorian calendar: Islam uses the Hegira calendar and Taiwan uses the Republic of China calendar, for example. But the Japanese way of changing every few decades to a new name for the years is unususal. The roots of this tradition go back to ancient China. The Japanese emperor introduced the Chinese system of measuring time in the 7th century. Until the system of giving one era name to each emperor’s reign was established in the Meiji Era, the names would be changed based on disasters, plagues, and even when an unusual turtle appeared on the scene.

Once the Black Ships came, the samurai era came to a close, and Japan opened to the world, the Meiji government aimed to make an imperial state with the emperor at the top. The Japanese people had developed a deep sense of respect for the emperor that had grown over several generations through tradition and blood ties. However, the Japanese empire, which the military had spread through Asia, burst apart when Japan fought the US in World War II, leading to its surrender in 1945. Under the control of the US General Headquarters (GHQ), Japan rebuilt itself using a peace constitution that didn’t allow for a military. Emperor Showa announced to the country that he was not a divine being but a human. A photo from that time showed just how apotheosized the emperor had become, with people kneeling as he spoke, and one elderly woman who stood just next to the emperor looking out trying to figure out where the emperor was.

What do people think of the emperor today, after this symbol of the nation was redefined through the postwar Constitution as having no influence on the country’s governance? According to a poll conducted by NHK in 2013, 34% of respondents say they respect him, with more elderly people saying that than young people. A total of 35% said they had a good feeling about the emperor, and 28% said they didn’t feel strongly either way about him. Just 1% opposed the emperor. This is probably because the emperor since the war is known for visiting people in Japan and abroad, offering consolation after earthquakes and other disasters and generally taking a peaceful stance.

There has been a lot of discussion building up to the new era name about the long history of the emperor, whether a woman could ever take the position, and what role the emperor should have in modern Japan.