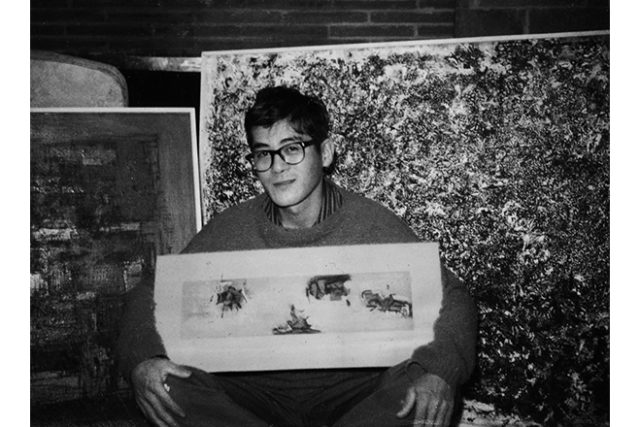 By David F. Martin
For The North American Post

Cascadia Art Museum is honored to present the first exhibition of painter John Matsudaira (1922 – 2007), one of Seattle’s most noted artists of the mid-20th century.

Born Takehisa Matsudaira in Seattle, he was educated in Kanazawa, Japan and returned to Seattle in 1935. After him and his family were detained in the Minidoka incarceration camp, John enlisted in the U.S. Army and valiantly served in the legendary 442nd Infantry Regiment, the most decorated military unit in U.S. history.

Drawn primarily from works held by the artist’s family, the exhibition will feature rare early works from the 1940’s and progresses over the decades, illustrating the maturing of his talent into the 1970’s. The works were created in a variety of mediums such as watercolor, oil and casein, and they encompass both his figurative and abstract styles.
The name of the exhibition, “Against The Moon,” is derived from the title of one of Matsudaira’s lost paintings. It is indicative of several aspects of his life and career. He began his journey as an artist after returning from World War II with a serious injury sustained during combat in Italy. Against the odds, he overcame his physical challenges and attended the Burnley Art School with funds provided by the G.I. Bill.

His talent was first recognized in the late 1940’s when he began exhibiting in the Northwest Annuals at the Seattle Art Museum. These exhibitions presented the finest regional artists of the period who worked in a variety of mediums.

Many of Matsudaira’s paintings, even some of the abstractions, appear to be illuminated by moonlight. While the daylight sun emanates light, the moon reflects it in a mysterious and poetic manner. These qualities of light and introspection are at the heart of his painting. Balancing a marriage, children and a 30+ career at Boeing, he would often paint at night when time allowed.

Although Matsudaira was fully integrated into the regional art scene, he often worked with other important Nisei artist such as Paul Horiuchi, George Tsutakawa and Kenjiro Nomura as well as the iconic Mark Tobey.

John was the youngest of this group all of whom were represented by the legendary Zoe Dusanne Gallery in Seattle. Dusanne played an important role in the cultural history of Seattle and had a keen eye for talent. Being African-American, she appeared to have an affinity with other minority artists, especially those of Japanese heritage. Looking beyond the region, Dusanne also provided the only venue in the Northwest where the public could view and collect the works of major international artists such as Lyonel Feininger and Paul Klee while still promoting her regional stable of artists. It is most telling that Dusanne gave the Japanese artist, Yayoi Kusama, now an international phenomena, her first U.S. exhibition at her gallery in 1957.

Matsudaira was a man of few words. His art told the story of a highly sensitive and talented man who lived his life not in the spotlight of the sun but against the reflective light of the moon.

The exhibition will open on Wednesday – Sunday from May 13 through Aug. 23 at Cascadia Art Museum in Edmonds. A special members opening event will be held at 6 – 9 p.m. today. More information can be found at www.cascadiaartmuseum.org.

[Editor’s Note]
The writer is the curator of the Cascadia Art Museum and can be reached at admin@cascadiaartmuseum.org or (425) 336-4809.