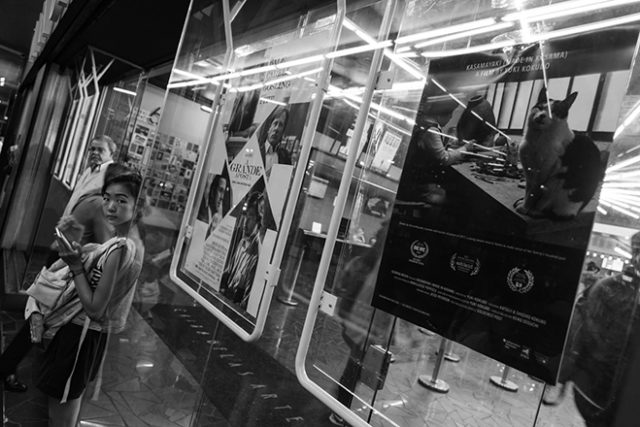 I am a Sansei Nikkei, 35 years old, born and raised in São Paulo. During childhood and adolescence, I did not have much contact with the larger Nikkei community; I associated only with relatives and some friends. I did not attend Nikkei events, eat in Japanese restaurants, or study Japanese—three things that, years later, I would do a lot.

I did notice one thing when I was growing up: among the elder Nikkei (the Issei and Nisei), it was common to greet other Nikkei on the street, even if they had never met before. They would do it with just a slight bow, or at most a konnichiwa, without breaking their stride.

My parents did that from time to time. When I was a kid, I remember seeing them greet a strange lady on the street. “Who is she? Is she a relative?” I asked. They said she was not, and they could not quite explain why they had greeted her.

I decided that I would try to pick up this custom. My protocol was that if eye contact was made with another Nikkei on the street, then I would offer a greeting. Interestingly, I found that different age groups produced different results. Greetings tended to happen with the elderly—the jichans and bachans. Among younger adults, greetings did not feel natural to me.

My interpretation of this situation is that the older immigrants are happy to see other Nikkei in a place where they are a minority, whereas for those born and raised in Brazil, it is hardly surprising to find someone of the same ethnicity in such a big, diverse country.

It has always been interesting to get to know the families of Nikkei friends. The parents would ask about school and work. The grandparents wanted to know my last name and how it was written in Japanese; with this information, they could usually identify the prefecture that my family was from. If not, they would ask.

My parents told me that my grandparents had been born in Japan; they also told me which prefectures they were from. When I was little, I understood only that these were distant locations. As I got older, I learned where in Japan each prefecture was, and what their distinguishing features were.

Learning how to properly write the kanji for my family name, Minatogawa, took a while. I was 18 years old when I began to study Japanese more seriously. When I asked my father about the family name, he showed me a piece of paper on which his older brother had written the kanji. The day came when I had to buy an ihai (memorial tablet) to put inside the butsudan (family shrine). I was asked how to write the family name in kanji. It was an important question, because there are two different ways to write “minato.”

In informal conversations, I still find it hard to understand when people write kanji in the air or on their palms. I need to write it down on paper in order to visualize it.

My parents also taught me about immigration, using our own family’s history as an illustration. In my opinion, it is essential for Nikkei to know that part of their family history—to know what led their ancestors to move from Japan to Brazil, for example.

I often ask the same questions of friends who are not of Japanese descent. It is interesting to hear the stories of other immigrant families. Among the people I know, the Italians are perhaps closest to the Japanese, in terms of how they cultivate family traditions and never forget the cities that their grandparents came from.

Today, I can pinpoint with reasonable accuracy if a person is a Nikkei, or simply a Japanese person living in Brazil—after all, not everyone came over on the Kasato Maru (the ship that brought the first group of Japanese immigrants to Brazil in 1908). Usually, the way they dress is a dead giveaway.

I have had very brief interactions with these so-called expatriates—simple things like giving directions. Spontaneous greetings or conversations do not usually occur with this group of people. I think they already know that there are many Nikkei in Brazil, so it’s no surprise to see them on the street.

The boundary between public and private is much more defined in Eastern societies than Western ones; building a personal relationship with an Eastern person usually takes much longer than it does with a typical Western person. The typical Nikkei tends to be reserved, speaking in lower tones and making little use of gestures. This behavior can sometimes be interpreted in Brazil as arrogance or indifference.

It was probably natural for Nikkei to gravitate toward one another through business associations and social groups. It also generated some criticism from outsiders, who perceived the Nikkei as keeping to themselves. I see this as a stage of the immigration and assimilation process. Today, not all Nikkei belong to Nikkei associations, and Nikkei associations count many non-Japanese among their members.

For me, it’s not easy to start a conversation or make friends. It amazes me how some people can talk to strangers with such ease. There are places I’ve been going to for years where I still don’t know anyone’s name. From my point of view, there has never been an opening for an informal chat; I also don’t like the thought of disrupting another person’s routine.

There may be one situation, however, in which Brazilians are more shy than Nikkei. In Japanese restaurants, non-Japanese customers are usually reluctant to sit at the counter. In Brazil, counters are associated with snack bars and other casual establishments; sitting at one in a more formal dining context is simply not part of the culture.

When I was living in Japan, I would visit smaller cities. I went out for walks alone and observed the dynamics that would occur with passersby. Just as it was in Brazil, it seemed the elderly were more likely to offer a greeting. Often I would hear “Good morning!” or “Nice weather, isn’t it?” or “Looks like it will rain.”

In situations where a conversation developed, I would always mention I was Brazilian. People would respond by talking about Carnaval, soccer, and churrascaria (Brazilian-style barbecue). One lady mentioned the Iguaçu Falls. I think it’s natural for the Japanese to automatically think of these popular attractions, just as a Brazilian might automatically think of samurais, sushi, and karate when thinking of Japan.

One of the most memorable exchanges I had in Japan, although it was a quick one, was with a lady on a train. I was standing near the window to look out at the landscape. I had noticed this lady, who had an unfriendly face, standing about three feet away from me.

Suddenly, on the horizon, a bullet train came out of a tunnel. The lady smiled and uttered an “oh!” Seeing that I had noticed, she said, “Sumimasen (Excuse me).” I responded, “That’s beautiful, isn’t it?” She agreed. Before she left, she explained that the train we saw was the N500, her favorite model of shinkansen (high-speed rail car). She thanked me for joining her in that moment.

This automatic familiarity among Nikkei can have a down side as well.

Recently, after making brief eye contact, an Asian lady approached me. I thought she would ask me for directions or something, but instead she asked for money, claiming she needed to buy medicine for her sick daughter. She spoke in a very low voice, but showed no embarrassment. After my initial refusal, she asked me again.

In Brazil, it is not common to see Nikkei who are destitute or involved in criminal activity. This, on top of a shared heritage/community, tends to make Nikkei automatically trust one another. A Nikkei con artist could easily take advantage of this trust.

Another time, I bought a used product on the internet, which I do not usually do. Because the seller was a Nikkei, I trusted him. We agreed to make the delivery in person. Starting off on the wrong foot, he arrived late and did not apologize. I ignored the warning sign and did not open the package to check the product until I got home. Finding the item in poorer condition than promised, I contacted the seller to cancel the deal. Of course, he refused.

The material loss was not great, but the disappointment was. I was naïve to trust a stranger just because he was a Nikkei. At least I learned a lesson.

In my opinion, these types of interactions and alliances among Nikkei will gradually disappear as integration into Brazilian society continues. At first there is always a natural tendency to favor those of your own kind, but that tendency soon gets interrupted by the common rules of the society in which we live.

“Helmet for My Pillow” and “With the Old Breed”