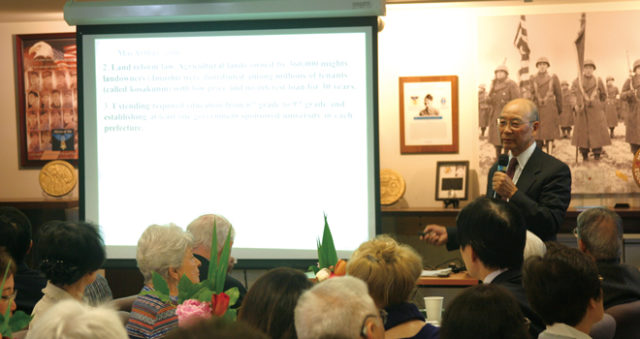 The medical center was founded in 1989 as the Nikkei Disease Prevention Center to “conduct such screening for Japanese Americans in Seattle for promoting their health and conducting comparative studies between Seattle and Japan.”

The center was later renamed but has been “dedicated to health promotion, disease prevention, and research in medicine and in public health for the benefit of all mankind.”
“Through the ups and downs [of the center]… [Namekata] continued to generate grants, continued to do his research and continued to publish,” said Glen Furuta, a board member. “It is very admirable that [he] stuck it through to do so much for society and for humankind all over the world.”

Namekata found in his early research that eating habits between Japanese Americans and native Japanese are different in vegetable consumption and quantity at dinner. He said that Japanese natives usually eat more vegetables and less food overall at dinner, which affects their health.

He added that Japan’s average life expectancy has increased due to such eating habits and to political, cultural and social reformation after World War II, led by Douglas MacArthur and the Allied Occupation Forces in Japan.

Namekata concluded with the following suggestions for good health:
1. Try to consume as many vegetables as possible every day.
2. Do daily exercise and/or walking/jogging.
3. Maintain normal blood pressure and cholesterol levels.
4. Maintain your body mass index at less than 25, or less than 23 ideally.
5. Maintain your blood glucose level at less than 100mg/dl.
6. Take one baby aspirin (81mg) every day.
7. Ask your doctor if you are infected with Helicobacter pylori. If infected, you need to eradicate it with antibiotics.
8. Drink green tea every day. Green tea contains catechin, which is considered to prevent cancer.
9. Maintain your social network to support each other among friends.

“The research has constantly been advanced and was quite challenging,” Namekata said.

“I really appreciate all of your support.”

Joy Okazaki, board president of the Kubota Garden Foundation