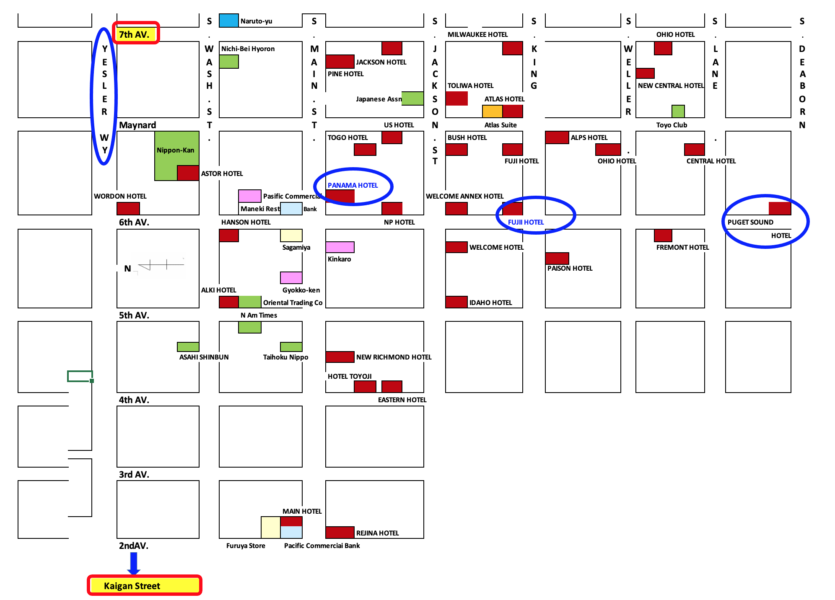 History of Seattle Nikkei Immigrants from ‘The North American Times’

This series explores the history of the pre-war Japanese community in Seattle, by reviewing articles in “The North American Times,” which have been digitally archived by the University of Washington and Hokubei Hochi Foundation (hokubeihochi.org/digital-archive). Publication of this series is a joint project with discovernikkei.org.

‘The North American Times’ was first printed on September 1, 1902, by publisher Kiyoshi Kumamoto from Kagoshima, Kyushu. At its peak, it had a daily circulation of about 9,000 copies, with correspondents in Spokane, Vancouver BC, Portland, San Francisco, Los Angeles, and Tokyo. When World War II started, Sumio Arima, the publisher at the time, was arrested by the FBI. The paper was discontinued on March 14, 1942, when the incarceration of Japanese American families began. After the war, the paper was revived as “The North American Post.”

In the last issue, Shinmasu began explaining how much hotel real-estate Seattle Japanese Americans held before World War II. We left off with an interview with Manpei Miyagawa, head of the Japanese hotel union, that was printed in the ”North American Times” on Feb. 14, 1919.

“You know, I don’t like to consider myself the new hotel rich, the authority, or someone who became a success. It’s not only because I haven’t really reached that state. If I make myself a source of that kind of information in a newspaper or a magazine, or if people talk about me (in that way), it will make me seem frivolous and lead to some unwanted results. Hahaha. I have seen a truly amazing rise of the business over the past three years. It’s true that we will see a solid foundation for the future of my peers and their businesses, if things keep growing like this for the next two or three years. But in my opinion, it’s not beneficial for one to expand one’s business substantially.”

“There are about 250 hotels that are owned by Japanese. From the waterfront to Seventh Avenue, you can find 100-plus hotels, all of which are run by Japanese. We can probably say that most of the major hotels in south Seattle that mainly serve workers are operated by the Japanese. Their customers are mostly Caucasian workers, specifically those working in shipbuilding yards.

“We have warned our readers many times in our paper that Caucasian customers are feeling antipathy toward Japanese hotels and making complaints, due to hotel businesses being inhospitable. The recent increase in hotel charges seems to continue nonstop, with no set ceiling. It’s such a loathsome thing to say that ‘those who can’t afford it should not use it.’ Sales people should explain that ‘the increase in hotel charges happens only naturally because the labor fee in the hotel business has gone up and the laundry fee has gone up. But the way the hotel charges are increasing these days is incomparable to how the cost of materials is rising.

“Today, the owners are charging a dollar or a dollar and half for a room that’s usually worth around 50 cents. In a more extreme scenario, they would take unfair advantage of their customers and charge two dollars for a room, which is outrageous. With more people buying and selling hotels these days… they have paid an unthinkable amount (100 dollars per room) for their property, which consequently forces them to increase the hotel charge absurdly – this serves as an irritation to customers.
In an article titled “Future of Japanese Hotel Businesses in Seattle,” Eihan Okiyama commented on this complaint (NAT, Jan. 1, 1919).

“We can’t deny the negative aspects of its growth. First, because the price of hotels has skyrocketed rom two years ago, many people saw opportunities for speculative activities, which led them to buy and sell hotels frequently, making property owners worry about the potential risk. Second, hotels took unfair advantage of customers in the economic boom by charging them outrageous rates and made them lose faith in their business. Third, the owners somehow forgot their role of providing a service and treated their customers without sincerity or generosity.

“The first two aspects were common characteristics of new hotel owners who had no choice but to raise the charges because they purchased the hotel at an exorbitantly high price.

“The third aspect could be seen in both newcomers and veterans, so I hope that owners reflect on how they have operated their businesses, prioritize their duty to serve customers with hospitality and sincerity, and treat Caucasian workers accordingly.
“The effect of hotel businesses providing positive experiences for customers will not be limited to softening the anti-Japanese feelings of Seattle residents. I believe that the effect will be much greater, considering that visitors from different states will spread (news of) the service through word of mouth across the country. I sincerely hope that for the well-being of the Japanese and for the future of their hotel businesses in Seattle, they will strive for serious consideration and for truthfulness.”

According to the Jan. 1, 1920 NAT, Okiyama was not only a leading figure in the hotel industry, but was a 33-year-old with a bright future who founded Okiyama Shokai (Okiyama Trading Co.) and ran the trading business as well. He also served as chairperson of Nihonjin-kai (the Japanese Association) for two terms successively after 1934. He attended my grandfather Yoemon’s funeral in 1928 as a representative of his friends.

“The Seattle Japanese Hotel Union held its general meeting at Maneki restaurant. With 120 members in attendance, the following people were chosen as board members this year: Tokihiro Hayano as union president, Kumataro Matsuda and Kazukichi Tsujimoto as vice presidents, Seiichi Hara as senior director, Hisato Fujii as director, Kaizo Chikamura and Shosuke Yamamoto as chairpersons, Eihan Okiyama and Mannosuke Shiraishi as advisors. As of now, 207 hotels have joined the Union.”

Kazukichi Tsujimoto was elected union president and Tokihiro Hayano, who had been a chairperson, became an advisor. There were 129 people in attendance and the Union had 213 members.

“We see more hotels built in Tokyo these days but it’s still hard to find ones that are easily affordable, make the guests feel comfortable, and are relatively economical at the same time… You hardly see any hotels in Osaka and Kobe… this has got me thinking. Why don’t you, my peers who have plenty of experience in the business and have made a success here, start a hotel company and run an American-style hotel business in Japan? Wouldn’t the American-style be the best in the hotel business? Plus, it would seem rather natural for hotel workers in the U.S. who have experience in the American-style business to make the leap and operate American-style hotels in Japan. Also, luring American tourists to Japan and giving them feelings of satisfaction and entertainment might be one of the best things that a hotel worker in the U.S. could do.”

This passage shows how advanced Japanese hotels in Seattle were from the perspective of someone in Japan.

Looking at the articles I have introduced so far, we can clearly see the development of Japanese-owned hotel businesses in Seattle. In 1918, there were about 140 hotels run by Japanese. The number jumped to over 200 in 1919, which shows just how dramatic the growth was.

The momentum carried through for years, with 207 Japanese-owned hotels operating in 1939 and 213 in 1940. Most of the hotels south of Yesler Way were owned by Japanese. When we look at the map of “Hokubei Hyakunen Zakura” (the original 1969 Japanese version of Kazuo Ito’s “Issei, A History of Japanese Immigrants in North America,” 1973), we can see 33 Japanese-owned hotels south of Yesler Way. Among them are Manpei Miyagawa’s “Puget Sound Hotel,” Chojiro Nagai’s “Fujii Ryokan” (inn), and “Panama Hotel,” which still exists today as a national historic landmark.

My grandfather Yoemon operated a hotel business himself in 1928, after making a success of the barbershop business. By reading articles from the NAT, I was more convinced as to why running a hotel was such an attractive business for Yoemon.

In the next chapter, I will introduce some Japanese newspapers that helped the lives of Nikkei people.

The Japanese version of this article is at：https://napost.com/ja/north-american-times-vol7/

Part 8 Picture-Bride Marriages on the Rise

“Against The Moon: The Art of John Matsudaira”