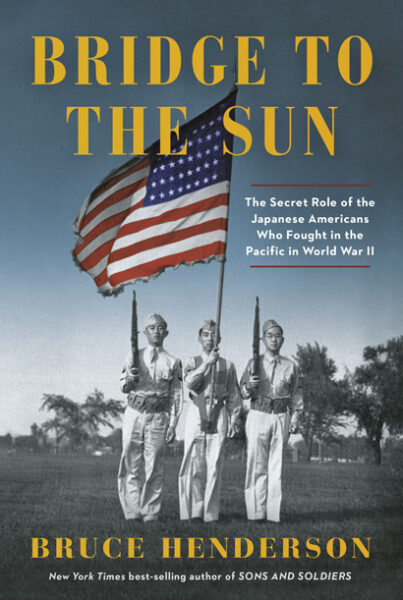 “Bridge” is the latest book title by a “New York Times” bestselling writer on Japanese American history. In it, author Bruce Henderson adopts the “Boys in the Boat” approach to tell the tale of US Army Military Intelligence Service (MIS) linguists through the experiences of a few individuals: Tom Sakamoto, one of only three JAs at the Japanese surrender ceremony on the USS Missouri; Kazuo Komoto, a California farmboy; Nobuo Furuiye, a Colorado farmboy; Grant Hirabayashi, second cousin of the better-known Gordon; Hiroshi (Roy) Matsumoto, father of local educator Karen Matsumoto, and Takejiro Higa, born in Hawaii, but raised in Okinawa.

Higa is introduced as follows:
“(B)oth Higa brothers volunteered for the all-Nisei (442nd) battalion being formed in Hawaii in March 1943… but Takejiro didn’t score well enough on the Army’s English proficiency exam…

“Three months later Takejiro received a letter from the War Department asking if he was still interested…. They wanted to know if he would be willing to volunteer for… a special unit of Japanese-speaking soldiers…
He was… handed a short article in Japanese.

“Can you read this?” the Army office asked.

The present-day JA reader turns Henderson’s smooth-reading pages with mixed feelings. While we are grateful for it being written, we cannot help but wonder why it took 77 years to tell the tale of soldiers who were far more valuable to the US than their peers in combat infantry.

In any case, readers who purchase several copies of “Bridge” will find satisfaction in getting some of their Christmas shopping done early. They will also begin to understand the often-quoted phrase that Nisei translators shortened WWII by two years and saved thousands of American lives.