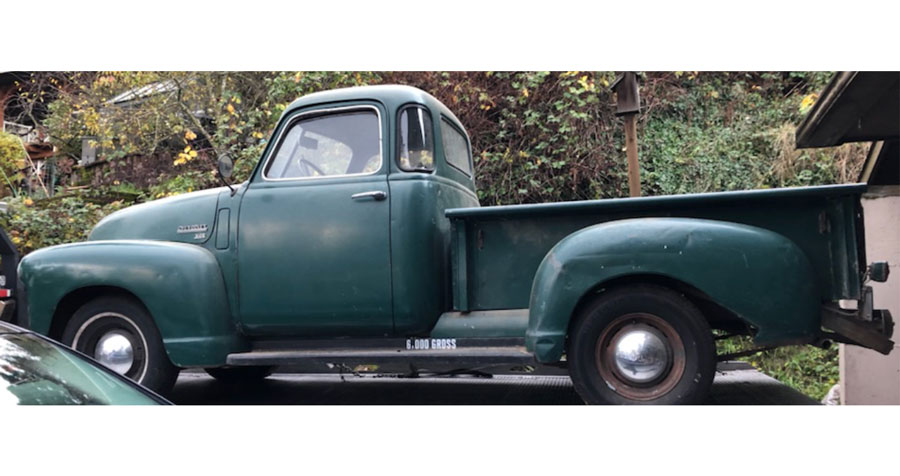 I am Sam Goto’s 1951 Chevrolet pickup. What makes me special is that I have two corner back windows, making me the “5-window” model. I remember when Sam first picked me up in 1974, off his Dad and brother Fred’s farm in Quincy, Washington. Fred said he bought me used, in Wenatchee around 1954, as a utility truck for the farm hands to do their work and run errands.

Sam and his wife, Dee, remember their frozen feet as we made the trip over Snoqualmie Pass, on the way to their home on Mercer Island, because my heater wasn’t working.

When we got to the house, Sam asked his girls, “Look what I got! How about going for a ride?”

Sam’s girls, seven and ten, were intrigued and were excited to take a ride. But when we were going along West Mercer Way, they saw someone they knew. They bent their heads down and hid because they were embarrassed to be seen with me. It only took them a week or so to discover that I was a classic that everyone wanted. Then, we started giving everyone rides to Baskin-n-Robbins for ice cream in the back. They always saved a few licks for Nadia, the dog. Two or three times, I was a swimming pool for hot summer days.

Lynette used me as her transportation for a lot of her summer jobs.

When Kelly got to Mercer Island High School, I really became the center of attention because I was dressed up as the Homecoming parade float a couple times.

All piled up in the backyard of the West Seattle rental house was an old iron furnace, old metal stove, boards, junk, and stacks of newspapers and magazines. It took four trips to the dump and Seattle Iron & Metal this time. When we took the 1000-pound load, we were too late at the Georgetown dump, so we took it all home to Mercer Island. Those hills were not easy.

That was all before July 3, 1993, when Dee picked me up after an overnight at Muffler City on Rainier Avenue.

“OOPS, the gears are stuck.”

Oh well, Dee—who grew on a farm—knew how to open the hood and even out the arms.

Most of my vital parts have been replaced and are in good working order, but I could still use a lot of restoration work, especially my clutch. Sam gave me a paint job so I look pretty good.

As we head to the Factoria Dump with GOK (God Only Knows) basement-room clean out and yard waste, it helps to have appropriate 1950’s Western Classics in the tape deck to set the mood:

“In 1814 we took a little trip, along with Colonel Jackson down the mighty Mississipp;

You load sixteen tons and what have you got? Another day older and deeper in debt.”

It’s amazing how my values are determined by people’s attitudes.

Update. It is 2020; Green Truck is on its way to a new home since Sam’s death three years ago. It is being re-restored for further adventures.