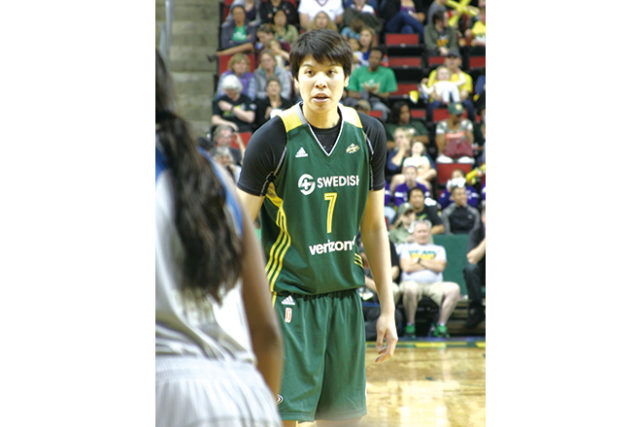 Over one hundred community members gathered for the Seattle Storm home opener at Key Arena to cheer for Japanese player Ramu Tokashiki.

Tokashiki returned to the team with a multi-year contract after her rookie season last year. She seems to be the first option player from the bench and scored four points, two rebounds and one rebound in 18 minutes on Sunday in a 71-77 loss against the Minnesota Lynx.

Her play time in the first three games this year has been a bit limited with an average of 13.7 minutes while the team added top-draft-picked Breanna Stewart. Tokashiki understands the team’s situation and has not hesitated to give her best performance when on the court.

Head Coach Jenny Boucek gave Tokashiki credit for adjusting to her role on the team.
“She is ready and she impacts the game,” she said. “She is a great teammate and important for our team.”

Among the 9686 attendees, fans from across the Japanese community, like the Japan Business Association of Seattle and Pacific Northwest JET Alumni members, cheered together.

“The fans’ support will be important for our performance,” Tokashiki said in Japanese. “We want to thank them by putting forth our best efforts. Seattle’s Japanese people are like my family and so encouraging to me.”

The community representatives with the Storm are planning to hold a Japan Night event at the end of August.

Nisei Queen and Princess in 1967