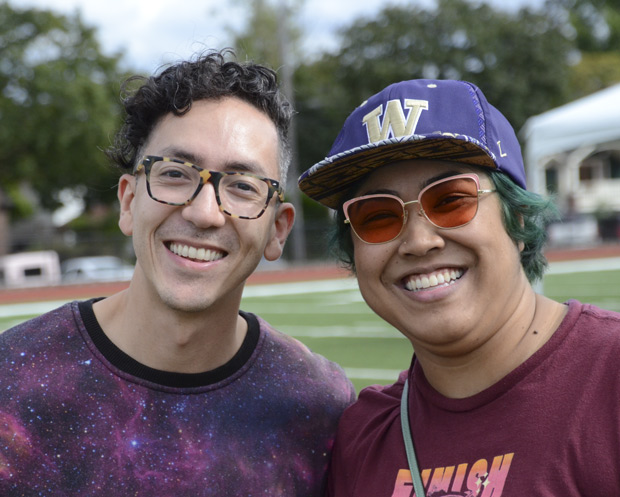 Saturday, Aug. 27, was the all-day Garfield High School Centennial Celebration. The milestone gathering for the school, established in 1920, had been delayed for two years, so an especially party-like atmosphere persisted across the day as former classmates of all classes reconnected.

This reporter chose to skip the likely crowded 1 p.m. formal ceremony, as the main points of the speeches would undoubtedly be captured by more mainstream papers. Instead, I chose to attend from about 3 to 5 p.m.

Then, I traversed the main buildings and grounds to converse with whomever looked like they might be able help me address the following questions:

What remains of the former large Japanese American student presence at Garfield? What were their experiences there like? And how did they differ from those of more recent Nikkei students and staff at Garfield?

The pictures tell the story. Multiple JA alumni were present in numbers only from the 1950s and 1960s classes.

According to Kay Hirai (’59), “In my day, Black and Asian students got along so well.”AC Arai, who spoke with the registrar, said, “There are no Japanese at Garfield now. The student body is half white. The area is gentrified.”

Current Nikkei student Noah Eisenberg refined Arai’s statements. He described the Asian student body as “mostly Korean, Vietnamese and Chinese, with a few Filipinos.” There are “not many Japanese.”

The most in-depth conversation I held on the racial composition of the Garfield student body was with Lani Smith (‘05) and Sao Uomoto (‘05). In school, Lani had participated in vocal jazz and theater, while Sao did theater and break dancing.

Smith spoke positively of the friendships she made at Garfield. She still “hangs out with all Garfield people.” Smith is the daughter of Sumi Hayashi (’74).

Smith described how when her grandpa bought a home on Capitol Hill, “everyone signed a petition to keep him out.”

In Smith’s mother’s time, Garfield’s enrollment had been 80% Black, owing to white flight. However, by Smith’s time, the percentage had dropped to 20 – 25%.

Smith continued by describing how in the late 1970s and early 1980s, Garfield had been transformed to a “science magnet school” in an effort to voluntarily integrate the schools. However, while that had worked partially on paper, segregation had, in fact, remained within the school because the Advanced Placement (AP) classes were all white. The Seattle School District’s use of race as a tiebreaker for student school choice in its voluntary school integration program later went to the U.S. Supreme Court. A white family sued and won, leading to discontinuation of the policy (text box, p. 6).

Accordingly, Smith described the past 5-10 years as “a return to neighborhood schools.” Students attend schools in their own neighborhoods, as they had before the start of busing.

The afternoon’s conversations accorded with the South Seattle housing history I had known before attending. JA students, abundant in the Central District enveloping Garfield in the 1950s and 1960s, had waned thereafter, as young Nisei families obtained what housing they could in the rapidly growing city. For most, that meant moving south as redlining kept north Seattle white (see related article, p. 6).

Still, even though Garfield has been at the center of all integration discussions of the Seattle Public Schools for the past 70 years, there was little sense of the turmoil at the centennial gathering. Despite many Seattle families being riven — indeed, families across the United States during this period — the day was just a big celebration.

Everywhere I looked, I saw classmates reconnecting, sometimes laughing, because at first, they did not recognize each other after so many years.

Kay Hirai: “We should have all been wearing big name tags.”

To return to the key questions, the main thing that remains of the former strong JA presence at Garfield lies within us. It lingers in the mindsets of older JAs today who grew up in the Central District and within those of the now-adult children they raised. It might be summarized as “people learn to get along.”

A few Nikkei continue to attend Garfield in the present day.

I left the Garfield campus simply inspired by what is possible when students attend school together at formative times of their lives. Throughout much of its recent history, I believe Garfield has been an “oversubscribed school.” Like Franklin, it has been a school that many more have wanted to attend than there has been space. All those present at the celebration, whether Black, white or Asian, were proud to share their day in the sun as Garfield students, past and present. Many were decked out in purple and white, the school colors. By midafternoon, the word was that all the Garfield gear on sale had been sold out.

It was a great day for the school and city.

Densho: Passing of the Torch

Bill Hosokawa: Out of the Frying Pan