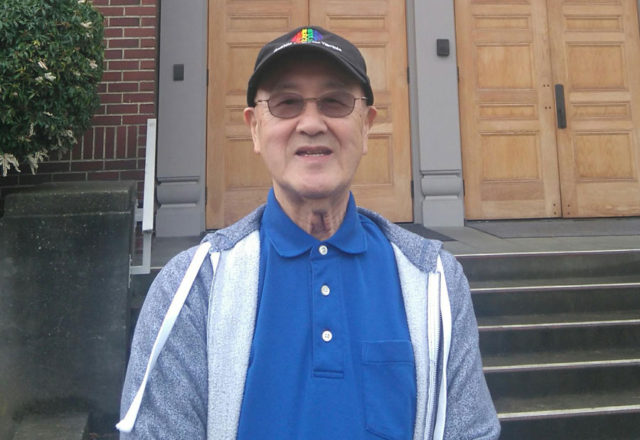 Masaru Tahara arrived in Seattle after World War II as a young man and sank roots into the Japanese American community, working actively with the Issei and Nisei, first- and second-generation residents. Later, he made a point to educate the third- and fourth-generation Japanese Americans about their forebearers, writing about their history and culture in English. Tahara worked passionately to bridge the gap between the English- and Japanese-speaking communities and is known well among those who like to fish. He is very proud of the 50-plus years he’s spent as part of the Tengu Club, a Japanese American fishing group, and has preserved its history

Masaru Tahara ■ Born in Tokyo in 1936, Tahara came to Seattle in 1955 after graduating from high school. He majored in chemistry at the University of Washington and ended up working in a UW microbiology lab for 30 years. He has served as the chief director of the Seattle Buddhist Church (Betsuin), the Seattle Japanese Language School preservation chairman, and the chairman of the Japanese Community Service of Seattle. He and his wife Anna have two daughters and are enjoying time with their three grandchildren. He has been an active member of the Japanese American fishing group Tengu Club for almost 50 years, preserving its history in a book.

The story of the Tengu club, Issei fisherman group

According to the research Tahara conducted, fishing, especially for salmon was the most popular sporting activity in the Japanese American community. There already was at least one Japanese business sponsoring a salmon fishing contest offering a huge trophy to the winner back in 1925. The 1936 Hokubei Yearbook listed eight fishing tackle stores owned and operated by Nikkei businesses in Seattle, indicating the popularity of the sports.

The best times to catch salmon are summer and autumn as the fish return for spawning. Seattle’s Elliott Bay was filled with hundreds of tiny wooden rowboats belonging to about twenty or so boathouses along the shorelines of the Bay. Many competitions (fishing derbies) were held with big prizes but without Nikkei who were well-known for their skills in catching the big ones. Few, if any of the derbies, welcomed the Nikkei and the boathouses were also hesitant to rent the boats to them.

So, the Nikkei decided to have their own contests in the winter months when the salmon were not as big but actively feeding and most of all, rental boats were available for them since nobody else bothered to fish in the cold weather.  The original Tengu Club was created in November of 1937.

From the very beginning the Tengu Club accepted anyone, regardless of race, nationality or ethnicity whoever paid their annual membership and daily dues in and enjoyed fishing for salmon. The Tengu Club had 240 to 250 annual members in those days, claiming to be the most popular sporting activity the Nikkeis participated and enjoyed.

The derby rules called for the members to use a set up with herring as bait and sinker with no artificial lures nor attachments to fish for salmon. The set-up was lowered to a certain depth, then the bait was moved by letting the line in and out to entice the fish. This technique is called “mooching,” and even now is widely practiced anywhere salmon swim. “Mooching,” came from “Moochers”, the name Japanese fishermen used to describe the others who asked for the secret of their high skills and techniques, as well as the left-over baits and share of the catches. The last fishing the original Tengu Club members participated in was on Sunday, December 7, 1941. The original Tengu Club ended that day.

In the first Salmon Derby after the war, 172 people competed in the winter of 1946. This number really surprised Tahara, who wrote, “The Nikkei had just returned from the internment camps, so you’d think it really wasn’t a time to go fishing, but after forced to live in confinement in the middle of the desert, they couldn’t wait to go fishing once the war was over.”

Over the years of associations with the Tengu Club members and others in the community, Tahara has accumulated a huge volume of notes, newspaper clippings, and photos that stack up to about a meter high, all relating to the fishing especially of Tengu Club. “So, I just decided to put everything together into a book; it took me four years”, Tahara recalls.

In 2016, in the name of the Japanese Community Service of Seattle as the publisher, the 250-page “Tengu – Tales Told by Fishermen & Women of the Tengu Club of Seattle” was published. Over the 70 years, the people changed and the environment for sports fishing changed. Yet, for Tahara, who has been a member of the Tengu Club for 50 years, the attraction to the traditions and history was especially strong. You can sense his passion in the way he talks about the different aspects of the club’s history and when you read his writing in the Tengu Book.

Of course, he was out there angling every time on Elliott Bay, exposed to the frigid sea breezes. He even won the championship twice, in 1995 and 2006. Accepting the championship plaque at the season-ending banquet were definitely very happy experiences for him.

Taking the Hikawamaru from Yokohama to Seattle

Tahara was born in Ikebukuro, Tokyo, in 1936. But he did have connections to the US. “Dad was an officer with the Metropolitan Police Department, which is why I was born and raised in Tokyo. But I had an aunt in Hawaii, and my cousin came to Japan as part of the Occupation Forces in 1946. Also, my dad’s older brothers were in Seattle and Los Angeles.”

Once Tahara graduated from Kitazono Metropolitan High School, his uncle in Seattle recommended that he come study at an American university.

“In September 1955, I left Yokohama Harbor aboard the Hikawa-maru,” Tahara recalls. He arrived in Seattle after a two-week voyage and began his studies at the Edison Technical School (today’s Seattle Central College), focusing on English and other core courses. That was where he met Anna, who had arrived in Seattle two months earlier on the very same Hikawa-maru. Anna was born in Washington, but she and her parents took the last Hikawa-maru voyage to Japan before World War II broke out. She returned to Seattle after the war, to be reunited with her sister. “It’s not just that she was two months ahead of me on the Hikawa-maru,” says Tahara. “She is a little bit older than me, and had already overcome hardships. She really helped me a lot.”

That comment shows what an earnest person Tahara is. He is blessed by his personal encounters. Besides going to school, Tahara started working as a dishwasher in 1957 at Sam’s Café in Pioneer Square. The owner, Sam Kitano, invited Tahara to go fishing. It was Tahara’s introduction to salmon fishing. Kitano introduced him to the Tengu Club’s derby but also invited Tahara to join him on fishing expeditions outside of the state. For Tahara, this relationship went beyond fishing. “He was a mentor for my whole life,” Tahara says.

After studying at Edison for two years, Tahara studied at the University of Washington and majored in chemistry. He married Anna in his junior year. Through an introduction, he was contacted by Microbiology Professor Helen Whiteley and ended up working in her research laboratory. “Her family was a Russian aristocrat so they escaped to Japan after the Russian Revolution, and lived in Japan for a while She was very kind to me,” he recalls. Tahara worked in Whiteley’s research laboratory as a research technologist for 30 years.

After retiring from UW, he began helping with the US-Japan Fair held at Seattle Center at the request of Tomio Moriguchi, then the chairman of Uwajimaya and publisher of this newspaper. Tahara worked as the executive secretary of Moriguchi for more than 10 years. He assisted in the move of Seattle’s Uwajimaya to its current location and the opening of the Uwajimaya in Beaverton, OR. He says he benefitted a lot from this work. “I got to meet a lot of people in Japan-US work. I also got to watch Tomio lead many different community organizations.”

“It might be because I spent such a long time in microbiology research, but I am always quick to take notes,” Tahara says. When he joined the Tengu Club in 1963, he quickly volunteered to take over as secretary. Beginning with the 18th derby (1962-63), he has been recording the club’s activities ever since. But he is not just the chronicler of the Tengu Club’s history; he has also taken on the role of being the club’s voice in the community at large. One story he is proud of is what happened in 1981. He was involved in a movement to preserve West Seattle boathouses, and his impassioned testimony at a special City Council meeting led to the boathouse closure plan being revoked. The Seacrest Boathouse, next to the West Seattle water taxi station, is where much of the Tengu Club activities take place. It’s also a space beloved by other Seattlelites. One corner of the boathouse has a monument to the history of the Tengu Club.

Tahara’s volunteer work for the Japanese   American community aren’t limited to the Tengu Club. He is also strongly connected to the Seattle Buddhist Temple (Betsuin) where he and Anna were married. It was established in 1901, is home to the Bon Odori festival in the summer and plays a special role in many Japanese people’s lives in Seattle. Tahara started to be involved in the church’s Campfire group, which his daughters Janet and Cindy took part in. Later he took many executive roles at the church, and even served as chairman in 2008.

One event that JCS has supported up till now is the Oshogatsu events. “Actually, another one of my interests besides fishing is cooking,” Tahara says. “I’m in charge of meals at our house.” He wrote a booklet in English in 1989 that explained in detail Japanese traditions and dishes related to Oshogatsu. He always supports the JCS’s annual “The Tastes of Japan New Year Party” event by cooking, preparing a large baked salmon.

In 2017, he received an award from the Consul General of Japan for his wide-ranging activities promoting understanding and friendship between the US and Japan.

This year, he is retiring from his co-chairmanship of the Japanese Community Service of Seattle and taking a little break from all his activities. When asked what he will do next, this is Tahara’s answer: “I want to pass on some part of Japan’s cultural activities and language to the young Nikkei who don’t speak Japanese. I want to do something to make that happen.”

He regularly awakes a little past 4 in the morning and heads to the gym with his wife around 5. While Anna is spending an hour swimming in the pool, Tahara concentrates on step exercises. Perhaps it is because of his workouts, but he has a lot more energy than the typical 84 year old. We look forward to his next pursuits.