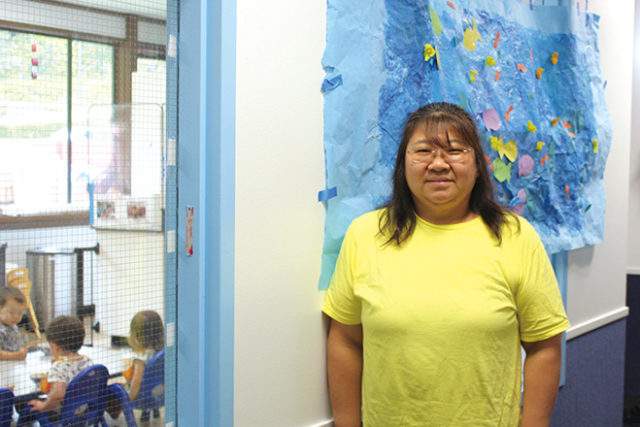 Megumi Preschool has been offering a preschool curriculum in Japanese and with a focus on Japanese culture since 1992. The North American Post talked with Founder and Director Yoshimi Suzuki.

Yoshimi Suzuki
When she was in middle school, Yoshimi left her home in Yokohama to move to Seattle with her family because her father became the pastor at the Japanese Baptist Church. She became close with many of the Issei generation through activities at the church and part-time work at Kawabe Memorial House. After studying early childhood education at Seattle Central Community College, she founded Megumi Preschool. She has been at the helm for 26 years.

Welcomed by the Issei grandmas and grandpas in Seattle
“When I came to Seattle at the age of 14, speaking no English, I was accepted by the Issei grandmas and grandpas,” says Yoshimi Suzuki, director of Megumi Preschool. She is a genial person with a nice smile and snappy answers to my questions. When her father quit his job as a high school teacher to become the pastor at the Japanese Baptist Church in Seattle, Yoshimi joined him, her mother and her sister in Seattle. The church was founded in 1899 for the Issei generation. When Yoshimi arrived in the 1980s, the elderly Issei made up the core of the church community. “I was surprised to find a society that was more Japanese than us in the US! They would make ohagi (traditional mochi rice for autumn) and teach traditional Japanese dance. I was really grateful!”

During Yoshimi’s high school days, she worked part-time at Kawabe Memorial House, an apartment building for senior citizens. She became friendly with many of the Issei who lived there. “There were a lot of third-generation grandkids who didn’t speak Japanese. There weren’t many opportunities for them to speak with another high-school student like me in Japanese. They were really thrilled by the exchange.” Influenced by her ties with the elderly community, Yoshimi began practicing the art of Japanese poem recital, known as shigin. She became a disciple of Takamitsu Miyabe, who was active in the Seattle scene. Even after she established Megumi Preschool, this kept her connected to the Issei community.

I want them to connect with their grandkids through Japanese
“Becoming a preschool teacher was a dream of mine since I was little,” Yoshimi says. Actually, Yoshimi’s grandparents on her mother’s side ran a Christian preschool in Japan called Megumi Aijien for many years. Yoshimi’s mom also worked there. It seems her family background set her on the path to one day open her own school. She graduated from Cleveland High School in Seattle and entered Seattle Central Community College to study early childhood education. Under Instructor Shizuko Iida, Yoshimi learned about preschool education and had hands-on experience at an infant nursery. Soon after graduating, she established Megumi Preschool.

At the time, Yoshimi was just 23. Did she decide all by herself to start her school? “Through four years of studying at university and getting hands-on experience, the desire to combine the best parts of Japanese and American education took hold of me,” she says. She was also driven by the desire to give back to the Issei community at her church and the Kawabe Memorial House. “When I saw first-generation Nikkei unable to speak with their grandkids, I felt the strong urge to teach the younger generation Japanese. I wanted them to connect from the bottom of their hearts through a common language.”

“I want to make a preschool where Japanese common sense and manners – like taking into consideration another’s feelings and honoring one’s elders – become second nature.”

Seattle’s first bilingual Japanese-English preschool is born
Megumi Preschool was Seattle’s first bilingual Japanese-English preschool when it opened in 1992. Soon, first-generation Japanese immigrants were bringing their grandkids. “At our open house, the grandmas from the church helped out, offering teriyaki chicken to visitors. The grandpas helped in the garden,” Yoshimi recalls. “The Japanese-language radio broadcast, JEN, where I worked part time in my college days, offered a radio spot to the school so that we could reach the Nikkei community.” Yoshimi says the school was made possible because of the support she received from the church, Kawabe Memorial House, the Japanese shigin poetry community, JEN, and the Nikkei community she had gotten to know since her middle school age. The school Yoshimi had dreamt of – a place where Japanese common sense and manners like taking into consideration another’s feelings and honoring one’s elders becomes second nature – was a reality.

However, she only had eight students the first year. To help pay the rent on the little house she used for the school and to pay her friends who helped her out, she had to work nights at Japanese restaurants including Shiro’s Sushi Restaurant. “My pastor father always said that in the US, you have to do your own thing and take care of yourself. For example, I paid my own way through college. Because of this, I became good at finances. To get my preschool up and running, I got a loan from my grandmother in Yokohama of 3 million yen. My first goal was to pay her back, and I worked hard to do so,” she says. Two years after starting Megumi Preschool, she had 24 students and her business started to take off. Today her Bellevue school has 122 students, and her Seattle school has 43, making Megumi the biggest Japanese-English preschool in the greater Seattle area. Graduates of the very first class are approaching the age of 30.

“When I saw first-generation Nikkei unable to speak with their grandkids,
I felt the strong urge to teach the younger generation Japanese.”

They can face life’s hardships because they’re surrounded with love
“Our teachers connect with the students as if they were their own. They enjoy watching the children grow up day after day,” Yoshimi says. “When they graduate, we practically want to thank them for spending time with us because we are so filled with gratitude. When they hit up against life’s hardships, I want them to remember how they were raised with lots of love at Megumi Preschool.” Today, Yoshimi concentrates on management as the principal and leaves the instructing to her teaching staff. “My work today is just to make sure the teachers and staff are all happy, such as bringing sweet treats,” Yoshimi laughs. At the day of our interview, the sweet treat was anmitsu, a Japanese dessert from Uwajimaya. These sorts of gestures are why the relationships between teachers and students, and staff and the principal are so strong at Megumi Preschool.

There are many students at Megumi Preschool who are not from Japanese or Japanese-American families. “I am grateful that many non-Japanese families are attracted to the bilingual education that we offer, but also to the educational values instilled through Japanese culture and the Japanese diet.” Three cafeteria employees make the balanced meals in the school’s kitchen. The students love the food. The connection to the Japanese-American community is strong. The students take part in exchanges like visiting the Keiro Northwest retirement home in Seattle to sing Japanese songs while also inviting those who live in Nikkei Manor.

Yoshimi is the mother of two boys in middle and high school. Outside of work, she is a member of the Japanese Baptist Church choir and she volunteers at a judo dojo her sons attend, keeping her active in the Nikkei community. Her family’s Christian ties go back generations, and she was raised in an atmosphere where people were always welcome in her home. Perhaps that’s why she likes taking care of others and enjoys being around people. The 14-year-old girl who crossed the ocean has become strong enough walking her own path to make her dream of managing a preschool a reality. She’s a role model for Japanese women living in the US, and there’s no doubt she’ll keep shining as she works within Seattle’s Nikkei community.

Megumi Preschool teaches infants a Japanese-language and Japanese-culture curriculum. Children learn important life lessons through their experiences here. For example, instead of saying “no fighting,” the teachers get the children to think about how they got into a fight, whether there’s another way to resolve it, and what they want to do next. The well-experienced teachers keep an eye on the students and help them through repeated experiences to understand concepts like willingness and kindness.
Megumi Preschool
Website: megumipreschool.com
Seattle : 7054 32nd Avenue South, Suite 101, Seattle, WA 98118
☎206-723-8818
Bellevue : 2750 Northup Way, Bellevue, WA 98004
☎425-827-2540