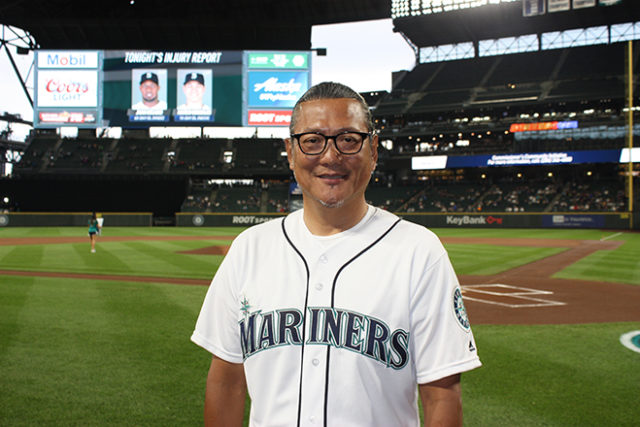 Masaharu Morimoto, best known for his starring role on the culinary TV show “Iron Chef” and the subsequent Iron Chef America series, will open a restaurant called Momosan Ramen & Sake in the International District in 2019. Momosan is a stylish ramen restaurant that also serves small plates and sake, a separate chain from the chef’s high-end Morimoto brand restaurants. The Seattle restaurant will be the third for Momosan, after stores in New York and Waikiki. It is expected to open on the first floor of The Publix, a commercial complex right in front of King Street Station that Uwajimaya built in 2016.

Chef Morimoto was born in Hiroshima. In 1985, he rode the sushi boom to New York, where he gained more experience. In 1994, he was involved with the opening of NOBU. He got to know the Seattle Nikkei community through his business partnership with Gobo Enterprises located in Issaquah. He has been active in raising funds for the senior retirement home Keiro Northwest and other Seattle’s Nikkei community organizations. Chef Morimoto also takes part in the annual Japanese Heritage Night at Safeco Field. He threw out the first pitch on September 7 when the Mariners played the New York Yankees, marking the fourth time he’s done this. “The first time I visited Seattle was in 2001, when the Mariners played the Yankees. Ichiro was playing against (Hideki) Matsui,” Morimoto recalled in an interview with The North American Post. “From that point on, seeing the strong Nikkei community in Seattle, I was interested in some day opening a restaurant here. At Momosan, we serve food that will bring a smile to everyone in a casual atmosphere and at a reasonable price. When it opens, I will be there, so I hope people will come out to meet me.”

More details on the opening and the menu at the Seattle store are being worked out, but a 2019 opening is in the works.