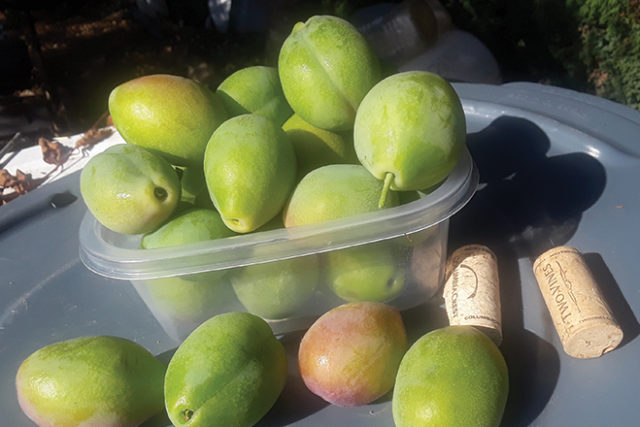 AS FELLOW CARETAKERS of fruit trees know, their yields vary yearly. I have five plum trees, an “Issei” tree I transplanted as a boy, three backyard-born “Nisei” sprouts from it, and a younger “hapa” tree, which appears to be a hybrid from cross-pollination with my neighbor’s tree.

Accordingly, in most years, I am drowning in plums. Jam- and smoothie-making friends and neighbors know to expect plums from me in July by the five-gallon bucket. This spring, however, I could guess that the 2018 crop would be meager. For a severe windstorm during the week that the trees were in blossom scarcely gave the flowers time to be pollinated before their petals and pollen-laden stamens were swept away. No flowers, no fruit. It is as simple as that.

As spring transitioned to summer, my fear came true. While there were a few dozen plums, mostly on lower, interior branches, there would not be enough to share with the usual friends.

This amount was just enough for another purpose, however. I could still try making umeshu, or plum wine. It is something I have wanted to do since seeing it in the movie, “Our Little Sister” (2015, Haruka Ayase, Suzu Hirose).

While instructional videos for making plum wine are available on YouTube—as with nearly everything— I know that whenever possible it is better to learn a new skill firsthand from someone who knows it. The videos are commonly incomplete. And so it was appropriate that from the dead of winter, I had set a July date for an umeshu lesson from Kiyoko Terao, an interesting, funny friend who I occasionally write about in this space.

Accordingly, across early July, I began my usual plum-watch. I began giving Kiyoko heads-up calls every few days to update her on the progress of the plums. That way, she could get her supplies ready and keep her calendar open.

The new thing for me was that unlike umeboshi, umeshu is made while the plums are still green. But how green? Kiyoko-san advised me, laughing, “Aoi dakedo, sukoshi yawarakai” [green but a little soft].

On July 12, I called Kiyoko to tell her that the day had come. By then the green plums at the leading edge were starting to turn pink. I didn’t think we could wait any longer.
When we met that afternoon, Kiyoko described the plums I had picked as “kachi kachi” [hard]. Still, after she placed a quick call to a friend to confer, we decided to go ahead with the plum making, as described here.

Instructions
1. Wash and paper-towel dry the green plums. Wash the plums three times (like washing rice).
2. Pull the stems.
3. Pull out the dark inner “eye” of each plum that formerly enclosed the stem.
4. Lay the plums in jars, alternating with layers of rock candy.
5. Immerse the layered plums in the wine.
6. Set the jars in a cool, dark place.
7. Swirl the jars, every ten days.
8. Wait three months before tasting.

Regarding #3, I suppose this is to keep these dark rings out of one’s otherwise clear plum-broth. Kiyoko advised using a toothpick. Later at home with my own batch, I just cut off the upper tip of each plum with a knife out of practicality.

Concerning #7, a key point is to keep the plums submerged. As the sugar dissolves, the plums will float towards the top of the jar. From my prior experience with umeboshi—where mold growth in jars is a problem—I took the initiative to fill my jar tops with old wine corks, which keep the plums below the air at the top of each jar.

For #8, the longer one waits after three months, the better the umeshu gets, Kiyoko says.

P.S. As this goes to press, two months into umeshu-making, the plums have transitioned from their original bright green, to light brown, to a faded green. The latter color reminds me of green olives.

In the fall, I will let you know how the umeshu turns out!

The Gaot, and Other Japanese Creatures