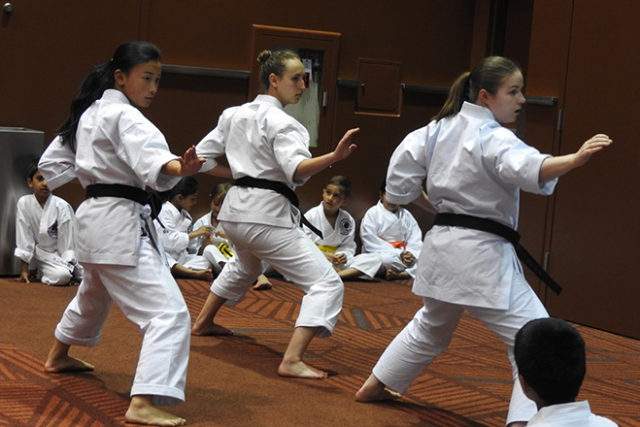 * Stage programs are as of June 20th and may change.

Tomo “Hoku” Angie has been a bilingual emcee for years in Hawaii and Seattle. Her talents expand as event promoter, interpreter, translator and tour coordinator. Visit htomohokuangie.com to know more Hoku.

Editor’s Pick from the Stage Performances

Sophie, Makena, and Kaia met when they became neighbors in 2017. They quickly discovered their shared love of singing, and immediately started creating beautiful harmonies together.
Sophie, age 17, was born in Japan and moved to Bellevue, WA, when she was 12. Fully bilingual in Japanese and English, Sophie has grown up with a deep appreciation for both Japanese and American cultures. A veteran of many local musical theater productions, she most recently starred in the Bellevue High School spring musical, Crazy for You, and is looking forward to releasing her first album with Agenda Records for the Japanese market. You can follow Sophie on Instagram (@sophiiart).

Sisters Makena and Kaia, both one quarter Japanese, have been singing together all of their lives. Makena, age 15, is an accomplished musician who won a Silver award at the Golden Key Festival piano competition at Carnegie Hall and was recently selected for the WMEA All State High School Treble Choir. Kaia, age 12, is an aspiring songwriter and has been recognized for her original song, “I’m a Girl,” inspired by the Time’s Up movement. She has raised over $800 for the Time’s Up Legal Defense Fund. (“I’m a Girl” can be found on iTunes, Amazon music and most other digital platforms.) Like her sister, Kaia was also selected for the WMEA All State Youth Choir this year. Sophie, Makena and Kaia are so excited and thankful for the opportunity to sing at Japan Fair 2018.

This year’s stage performance is a recreation of a show held in Kobe, Japan called ” Wayu-gi”. It is intended to show kimono worn with a individualistic and creative expression where the wearer is not tied to the boundaries of tradition but has fun showing off flair and style.This includes the usage of traditional Thai crafts, wearing pumps and high heeled shoes, and Obi tied in creative ways only YU Ugawa can claim. The men’s kimono will also be featured as a not- to- be- missed part in the show.

Songs of Hope (SOH) is a Seattle-based musician group established to support Tohoku (northeastern Japan) through a benefit concert series after the March 11th triple disaster in 2011. After more than seven years of activities in the Seattle community, SOH became the mother organization for the community choir “Chorus of Hope”, the bake sale group “Nadeshiko Bakery” and the study group “Seattle To Fukushima: Helping Mothers in Fukushima through Study and Activities.”
At Japan Fair 2018, SOH member Shiho Kurauchi will play traditional Japanese music including tanabata song with guest performers Marcia Takamura (shamisen), James Jennings (shakuhachi) and Jean Morishima (koto). Shiho Kurauchi and Jean Morishima are members of local Koto ensemble group, KOTO no WA. Another SOH member Fumi Tagata will join as soprano singer for tanabata song. In addition to the music performance, SOH member Miho Smith will perform Tanabata Story, in collaboration with Kurauchi’s Koto. Smith is one of the most sought-after storytellers in the Greater Seattle area, and co-founder of the Japanese Language Story Time program at the Lynnwood library.