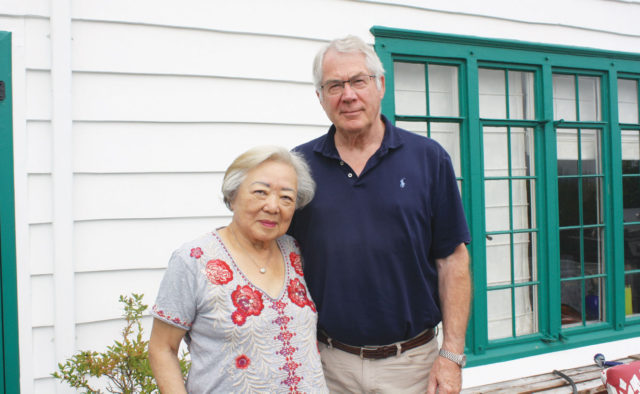 Noriko Goto Palmer has spent the last several decades keeping the Japanese and Japanese American community informed and entertained by producing radio and TV shows and publishing magazines, telephone directories, and maps. She sold her JEN media company to Lighthouse a couple of years ago and now concentrates her efforts on supporting the Japan Fair and being on the Board of the Arboretum Foundation. She and her husband, Doug, are gold-level sponsors for this year’s Japan Fair, and Noriko has served on the board and spent countless hours helping to organize the myriad schedules, fundraisers, and logistics that go into a cultural event of this scale. Doug, meanwhile, has recently retired from his law practice and is putting the finishing touches on a fascinating book about his friendship with Bruce Lee. He’ll be presenting a panel on Bruce at Japan Fair. The North American Post caught up with the Palmers to talk to them about their lives and careers.

Noriko, you grew up in Hiroshima, right?

Noriko: I was born in Wakayama Prefecture. I was three or four when we moved to Hiroshima. This was before the bomb. We were evacuated to Matsue for about three years and came back to Hiroshima in 1947. There were no buildings. My father was in the lumber business. He had a sawmill and imported lumber and whatnot. He built a new house, and it was one of the few buildings standing. At the school my mother took me to, I cried and said I don’t want to go there. It was like a shack. It was horrible. Even as a first grader, I remember thinking I don’t want to go inside.

I have three younger sisters, one elder sister and one brother, the eldest child. He died at 58, very young. Four of us at the bottom – all girls – people used to ask us, Do you have the same mother? There was a 12-year difference with my brother and a nine-year difference with my sister. When we were still little kids running around the neighborhood, they were going to college. My sister got married when I was in fifth grade.

You went to Sophia University in Tokyo after high school?

Noriko: The reason I went to Sophia is that I went to Notre Dame Seishin, a private all-girls Catholic junior high and high school in Hiroshima. It was not my choice; it was my father’s choice. He heard they were very strict, so he thought I would learn to be a genteel lady. (Both Doug and Noriko laugh.) The nuns at Seishin said, go to Sophia in Tokyo. You don’t want to go any other place in Tokyo. The place is dangerous. So that’s where I went.

I majored in journalism at Sophia University. My English at that point was better than some of the other Japanese students who had never had English spoken to them. I had a chance to talk to the Dean of Studies, a really great Jesuit priest. I had expressed interest in going to Columbia to study journalism at the graduate school. He knew a number of Japanese students going to the US as graduate students, but because of the language, they spent a year or two just studying English before going into their specialty.

At that time, I could not take Japanese yen out of Japan. All I could take was $500. If you wanted to go abroad to study, you had to have a scholarship from some place – the government, or a bank or an institution. The priest told me, “I don’t think you should go to a coed school.” He also told me that good schools have large library volumes. He gave me a number – I don’t remember it – of how many books a library should have. So I searched a book of colleges for large library volumes. I found Vassar and Smith, and then I snuck in Stanford. I didn’t tell him, but a friend of mine, a Chinese girl, had gone to Stanford a year before.

Doug: Even though it was not an all-girls school.

Noriko: My father didn’t know about my plan to study in the US. The first response I received was from Vassar. They said they’d give me a full scholarship.  So, I left on a boat with $500 in 1962 after two years at Sophia. When I told my parents about my plan, my father was very upset, and mother cried. But then they eventually let me go. I came to the US by ship from Yokohama to San Francisco. It was such a long journey for a college student in those days. I thought I might not come back to Japan again.
Vassar studies proved difficult.

How did you two meet?

Noriko: It was my junior prom.

Noriko: Any weekend, you’d see a number of Yale guys on our campus. They’d come and look around and see if they could find a date. I didn’t know what they were doing, but anyway, they were really arrogant. They were always boasting about this or that. I had two girlfriends who loved pranks. One was from Hong Kong and the other was from Turkey. I complained so much to them about these guys that they thought it would be really funny to invite one of them as my junior prom date without telling me! One day I got this letter from this guy saying, yes, I’d like to come!

Doug: They sent a letter in her name to the Yale Japanese department. I was taking intensive Japanese and was a sophomore. One day, our instructor came in shaking his head. He had this letter. It made the rounds. There were only five guys in the class, and the other four were graduate students and some were married. I was the only young guy. The letter said, Dear Japanese Department, I have heard that Yale has a very good Japanese department. I am a junior from Japan studying at Vassar and I would like to invite someone from Yale to come up for the junior prom and spend a Japanese-speaking weekend. I took the letter and told the other guys I’d take care of it. I responded to the letter, so she gets this letter out of the blue accepting an invitation which she knew nothing about.

At Vassar, you weren’t allowed in the girls’ rooms. We had to wait in the foyer, and those girls kept coming by and checking me out to report back to Noriko. But we went to the junior prom. And the next weekend, I invited her to Yale.

You studied Japanese at Yale?

Doug: I chose Yale for the Asian studies. It was one of the few schools in the US with first-rate Asian language classes. I majored in Chinese studies. Sophomore year I added Japanese. During high school, I went to Garfield, which was one-third Asian, so a lot of my friends in high school were Asian, and I wanted to learn more about the cultures and the languages.

So Garfield had a big influence on you.

Doug: Yes. And Bruce Lee. My goal was to go to China, but after I met Noriko, I switched my focus a thousand miles or so.

Doug: She graduated in ’65 and worked in New York. We got married halfway through my senior year. I graduated and we moved to Cambridge.

Noriko: Poverty programs were sprouting up all over major cities at that time. It was very easy to find a job as a social worker.

Doug: She would go to rough neighborhoods every day.

Noriko: I didn’t have the fear that most of the American staff had. I didn’t know any better, so I would just go knock on the door of a house in the projects. I remember I knocked on the door and asked for this kid named Mac, and his parents said, Oh, he’s in jail. Oh! I did it for two years, but I burned out. All day, all night I could get calls. I enjoyed it, but I got burned out.
Then I got pregnant with our first kid.

Noriko: It was a terrible decision on my part. I asked the doctor if it was OK to take a 10-day-old baby on a plane. He said, yeah, if the mother can take it. So, I thought, I can do it. But in Hawaii, my milk stopped. He had a horrible case of colic. It was miserable for the first month in Tokyo. I thought I was going to have a nervous breakdown because he would not stop crying. Plus, people told me my Japanese was funny. I was feeling very self-conscious.  My mother came up from Hiroshima and she saved me!

Doug: There were a handful of mostly American lawyers who were admitted to the bar. My boss was a Nisei from Wyoming. It worked out very well for me. I ended up spending four and half years there. The experience in Japan was fantastic.

Noriko: For you! (They both laugh.)

Noriko, tell us about how you began publishing Youmaga.

Noriko: First was radio. Ohayo Sunday. Around 1982, I came back from a trip to Japan and Tomio (Moriguchi) wanted to see me. He said, you know Noriko, there are no Japanese radio programs or magazines or anything in Seattle. I think we should have a radio program. I said, that’s fine. I thought he was going to do it and I was going to help him. He dumped the whole thing on me! Once a week, we made a two-hour program with music, news, book readings, interviews. I had to negotiate with the local radio stations to buy inexpensive time. It was early morning. That’s the only time that anyone would sell to us.

Eventually, we set up a studio in the International District. Then we moved to television. We broadcast dramas from Fujisankei. I would negotiate the rights. I did that until almost 1990, which is when I started the magazine. First it was called Youyou Magazine. Youmaga was much later. And we made the telephone directory. It was a headache every month! (laughs).

(*Youmaga was the monthly magazine brand of Noriko’s JEN media company. JEN’s business is now run under the ownership of Lighthouse.)

Doug, you’ll be making a presentation at Japan Fair about your upcoming book on Bruce Lee.

Doug: Yes, I’ll talk about the Seattle years. He came over on a boat with $200 in his pocket. At least Noriko had $500! He landed in San Francisco, but after a few months he came to Seattle. His friends were Ping and Ruby Chow. Her restaurant was one of the few good Chinese restaurants outside of Chinatown. He lived on the third floor and worked as a busboy and waiter.

In Seattle, at first it was just him and a few guys – tough guys – training. Bruce was still learning. His family described him as a good but not great martial artist when he left Hong Kong. He had a natural ability and a real work ethic. He did nothing but practice, practice, practice, and he was very good at taking stuff (techniques) from other (martial arts) schools.

A lot of these tough older guys saw that Bruce had a talent, so he started a school. That’s when I met him. At that time, his school was in the backyard of one of the students. So I’ll be talking about his time in Seattle.