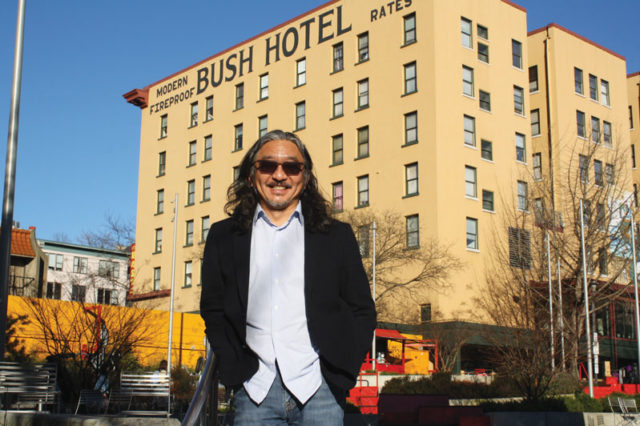 “Jazzed about the Future”

Harold Taniguchi said goodbye to a 35-year career in public service at the end of 2018. The longtime Director of Transportation at King County is now looking at unlearning old habits and finding a new path that may or may not include voice acting, life coaching, and who knows what else? The only sure thing about his retirement, Taniguchi says, is that he will be able to spend more time with his 94-year-old mother. Taniguchi is affable, self-deprecating, quick with a joke, but also a person who can commandeer a major public department that oversaw the Metro bus system, Boeing Field, the water taxi system, the county’s fleet of hybrid and electric cars and trucks, and the King County roads. He ran that department with aplomb since 2002. The North American Post caught up with him to talk about his career, his life in Seattle, and his plans for retirement.

Congratulations on your retirement. What are your plans?

I am not sure, actually. Maybe when people retire, they have a pretty clear focus of what they want to do. Mine is not set up that way. Really what I’m doing is taking some time, viewing it as a sabbatical, taking a break. The interesting thing is to have a little space so that you can shed the patterns of your prior job and get a clear sense of what you want to do next.

People have always interested me, so I’m looking at what it would take to be a life coach. Opportunities to help organizations through facilitation is interesting to me. Talking about leadership to young people in various stages of their career.

The other interesting thing that I am doing — and am totally unprepared for and not very good at – is I’m taking voice-over classes. That’s a lot of fun.

That seems like a natural considering your emceeing and auctioneering at various events over the years.

That first started 30-some-odd years ago when I was asked to be the master of ceremonies at a wedding reception. I gotta believe that was the first time. It was a Japanese American family and I was reading off the names of guests, and I was thinking in Japanese terms, and there was a person there whose first name was Abe, and I pronounced it “ah-bay,” and everyone in the audience laughed.

Right! Then it just parlayed into, hey, can you be our emcee? Then, hey, we just have one item to auction off. Can you do that too? Then, we have a few more items; do you mind being our auctioneer? There are real professional auctioneers, and I am not in that category whatsoever, but I have a lot of fun.

At the Japan Fair in Bellevue a few years ago, I got a list of names to read for introductions. They weren Japanese names that I have literally never seen before – vendors, special guests. I was given the list and I didn’t study it. I massacred the pronunciations. I had a smile on my face and was trying to do the best I can, then somebody in the audience – I think it was Tomio (Moriguchi, publisher of this paper) – said, “Where did you learn your Japanese?” Then, they asked me back and I was so happy!

Are you from Seattle originally?

Born and raised. My parents operated the Publix Hotel since a little bit after the War. I have friends who work for international companies and were CEOs all over the world. My world has literally been four or five square blocks in the International District. My parents ran the Publix hotel when I was a little child, so I hung around here. I went to Bailey Gatzert Elementary School, then Mercer Junior High and Franklin (High School). I went away to college, came back, worked for a little while, went to grad school, and ended up working for the county, which is right back in this area. And I worked there since 1983.

It was fun. In those days, we would ride our bikes everywhere. We would ride to Ballard. We would fish along the pier. That was in the 60s and early 70s.

When my parents operated the hotel, there were mainly just retired men who stayed there. There were single rooms and the restroom was down the hallway. As a young kid, I was very comfortable being around adults. I would run around the hotel and the International District, and there would be retirees, people with disabilities, and it never phased me. Some of them had nice personalities; some of them didn’t.

I graduated from Franklin in 1976. My year was the year when we didn’t have to register for the draft. I think that did a little bit to our psyche.


“My world has literally been four or five square blocks in the International District. My parents ran the Publix hotel when I was a little child, so I hung around here. ”

Franklin was very diverse. It felt like it was a third Asian, a third White and a third African American. High school was so fun. I was involved in a high school jazz band. For the three years I was there, the band had such talent. (Kenny G was a senior when Harold was a sophomore) We were undefeated in every competition that we entered. We traveled to Europe twice; we went to the Reno International Jazz Festival and won the grand champion award three times. Those were pretty cool moments. We had a certain sense of teamwork that I will for the rest of my life chase. Some were uber-talented and others, like me, skated by on what little talent we had, but we all came together through mutual trust and respect, and it just clicked. We also had a savvy music director and a talented composer in residence. I didn’t know at the time how gifted these guys were.

What did you play?

Trumpet. The theme of my life is I’m spoiled because things have gone so easily for me. Growing up as the youngest son in a Japanese American family, I was pampered to death. In high school, being in the band and having that kind of success. And in classes, I thought I was really smart. But I went to college and found out that’s not true! That was a rude awakening.

But then you found your calling with the county.

I went to the University of Washington for grad school in public administration. They required an internship; I had one with the King County Executive Office under Randy Revelle.

What were some of your biggest challenges?

Funding was the key challenge. Over the years, it kind of went up and down. The funding was there, then the funding wasn’t there. The Great Recession was a significant hit for our department. Transit, because it is sales-tax based, was able to recover. Roads, because it is property-tax based and has a limit as to how fast it can grow, didn’t recover and is still chronically underfunded. It was very uneven, the haves and have-nots. Roads can be very expensive and very challenging, in some cases, environmentally, but there is still a lot of work to do.

You oversaw a big increase in Metro ridership to something like 122 million today.

It’s pretty exciting how Metro has grown. The growth of the population and the additional constraints on car capacity is a good equation for the ridership to grow. Metro has done a terrific job. And Sound Transit, which is a different agency, is kind of like the spine going through the region. While it’s exciting to see, everybody knows it’s kind of late.

The divisions you oversaw have been spun off into different departments. How did that transition go?

At one point, about two years ago, there were five divisions that were under our department. Because we knew we were going toward a reorganization, divisions naturally started to peel off. For the last couple of years, I didn’t oversee Transit, for example. I am very confident in the people in those positions. There was no need to be stressed out.

It would be different if I didn’t like the people or they weren’t very good. But that was not the case at all. When you transition something to people you like who are very, very good, it’s a pretty good feeling.

Harold Taniguchi was born and raised in Seattle. His parents ran the Publix Hotel when he was a child. He graduated from Franklin High School, where he participated in the award-winning Jazz Lab in 1976, then went to Pomona College in California, followed by graduate school at the University of Washington, where he earned a master’s in public administration. He entered the King County Executive Office as an intern in 1983 and worked his way up to Director of Transportation in 2002. He retired at the end of 2018 and is now enjoying retirement and planning his next chapter.