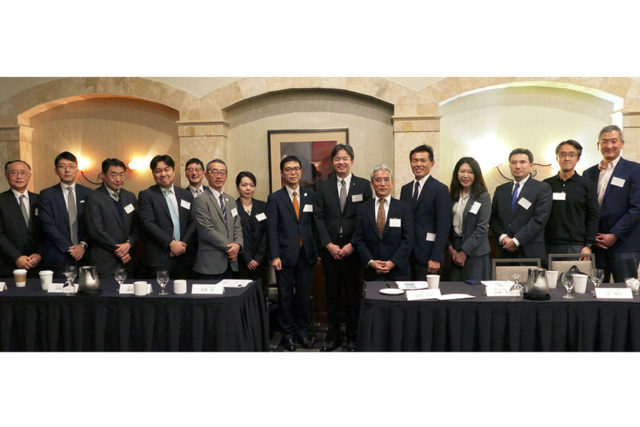 The Japan Business Association of Seattle (JBA), now colloquially known as the Shunju Club, was officially established in 1960, serving as a much-needed support for the Japanese businesspeople in the Seattle Japanese community. Over the past 60 years, the organization has engaged in various activities ranging from interfamily communication for expatriates of Japanese businesses to contributions to the local community. It also runs the Seattle Japanese School. With troubling times on the horizon, it is introducing new initiatives to carry out the duties demanded of them. In an interview with the new chairman, we follow the path of the Shunju Club from their inception to the present day.

“The Turning Point of 2020, A Time to Think of How the Organization Ought to Be for the Preservation of the Future”

Kosei Yamada is the chairman of the Japan Business Association of Seattle since January 2020. Yamada became the manager of the Seattle branch of Japan Airlines Co., Ltd, when the company established a new airport branch office in 2018.

Seattle, a Strong Bond with Shunju

Along with the reopening of the travel route of Japan Airlines between Narita and Seattle after 27 years, I took my position in Seattle in November of 2018 to head up the establishment of the new branch. Seattle was the place where my father worked as a diplomat at the then newly reopened Japanese consulate in the 1950s. My mother also came to Seattle riding on Nippon Yusen’s “Hikawa-maru” ocean liner to study in Seattle. They met and married in Seattle.

For many years, Japan Airlines did not have a branch in Seattle, but has  long been a member of the Shunju Club. On January 30th, of 2020, I received approval at our general meeting and became the 2020 chairman of the Shunju Club.

Raising The 3 Pillars of Purpose

Welcoming their 60th anniversary from its initial inception in 1960, the Shunju Club had Consul General, Yoichiro Yamada of the Consulate-General of Japan in Seattle as the honorary chairman. It is a huge family, currently standing at 135 registered companies, with a total of 360 individual members. You could say it is one of the biggest Nikkei communities in Seattle.

There are three main pillars that make up the Shunju Club’s mission. First is the enrichment of childhood education. The Shunju Club manages the Seattle Japanese School, a Japanese educational program that is held at Sammamish High School in Bellevue. The second pillar is communication with the local community. The Shunju Club is proactive in its involvement and support of various community events and Japanese cultural festivals, such as Seattle Cherry Blossom & Japanese Cultural Festival. They also host their own events such as Summer Social. Finally, the third pillar is promoting the deepening of friendship between members. They have started various events such as business-related seminars hosted by experts in economics and IT as well as classes on safety and medical care. They also hold cultural exchange events like New Year’s parties and Mariners viewing parties.

To accomplish each of these three pillars, there are commissions of education, communication, and economics/culture. Approximately 30 committee members, who are nominated each year, take a central role in our activities.  An office staff handles administrative operations.

Enthusiasm as the New Chairman

The Shunju Club’s predecessor, the Mokuyo-Kai (Thursday Club) was formed in 1922 by the Japanese Consulate and workers of the Seattle office of Japanese trading companies. The purpose of the group was to deepen the bonds of friendship between fellow Japanese people living and conducting business in a foreign land. Back then, Mokuyo-Kai was an expatriate group and  its members may not have had much communication with the local Japanese immigrant community.

In the 1970s, there were many instances of Japanese bashing in America due to the trade war. In those days, the purpose of Japanese Chambers of Commerce in the US was extremely clear, such as lobbying activities to protect Japanese industries. However, as the needs of our Japanese community have become more diverse, the time to reconsider what the Shunju Club ought to be is coming. Especially in this 60th anniversary year that I have taken office, I want to verify the events that have taken place up until to this point while taking time to properly discuss the Shunju Club’s purpose and the direction that we are aiming for. My plan is to not make “change” itself the goal, but first, stop and carefully address the question in front of us: is change necessary?

The Seattle Japanese School serves as an example of taking the lead in dealing with the changing times. Welcoming its 50th anniversary this year, the school originally set its goal to serve as high quality Japanese language education for children coming from Japan. Now, however, more so than expatriates, the number of child permanent residents through marriage has risen and children holding American citizenship and permanent resident status now make up 70% of the school. Because of this, it has changed drastically from the time it was founded. There are physical limitations such as the use of the school building and time constraints allowing for only 1 class per week; but in order to carry out fixed roles in the community, this is the result of the trial and error of keeping with the times.

“I have no idea what the Shunju Club does.” I have heard this spoken quite often, and certainly, I have thought the same myself. To solidify the core of the organization, we must first make our goal and purpose clear.  All of the Shunju Club’s committee members engage in volunteer work that they fit in between their family life and their full-time jobs. I tip my hat to them. In the committee of director’s meeting, they can have vigorous discussions with a harmonious atmosphere, and feel a sense of comradery. Many women taking an active part in the various section meetings reflects very positively on us as an organization.

I think this kind of organization is almost like a homeowners association. Members who want to improve the place they live gather together, have a sense of purpose and have fun doing it as much as they can. Then naturally, that path should open doors. I want to aim to become an organization where all members clearly feel this benefit, can accomplish the goals of the club, then support the club’s purpose and actively participate. The club’s office staff understands our long history and support the chairman and committee members who are replaced periodically. The committee members reliably create a philosophy that applies to the times and demonstrates leadership. The current trial and error is good for long-term prosperity, and I hope it acts as a driving force for the future. There is a term limit, but even from now, as the chairman, along with the committee members and the office staff, I want to make efforts to implement a new organization.

Japanese Community in the Face of Coronavirus Pandemic

I am working in one of the industries suffering most from the Coronavirus pandemic. My daily life as well as economic activity has been completely turned around. Many of our members’ businesses have taken a big hit. In this kind of situation, we are thinking of what we can do for the community as Shunju Club. We have increased the frequency of the standing committee meetings from the usual once a month to twice a month and are working to establish an online discussion forum to exchange information and details of activities going forward.

The Seattle Japanese School had been on hiatus since March, but has started a remote learning program last month where we can continue to support the children’s Japanese language education. Our annual medical care seminar was held online this year. We usually explain the American healthcare system to newly arrived expatriates at the seminar; however, we have chosen to broaden the topic by changing this year’s theme to countermeasures against Coronavirus infection. Over 200 people gathered to participate, with more than half of them having been in America for over 5 years. We believe this was a good chance to spread information widely across the community.

We cannot be certain of how bad the situation will get or how long it will persist, but we plan to offer useful information corresponding with the gradual relief efforts being implemented within Washington state.  We are keeping in mind the possibility of the situation being prolonged as we aim to be a necessary organization, making great efforts to unite everyone in the community and encourage cooperation with each other to overcome these troubling times.

Celebrating its 60th anniversary this year, the Shunju Club is a non-profit organization that supports Seattle Nikkei businesses and the local community. As of 2002, they have been known as the Japan Business Association of Seattle. In 2006, they introduced a system for remote location members as well as individual members, enrolling not only Japanese businesses, but many Seattle Nikkei businesses and owners as well. The current number of members has reached a total of 135.

Understanding the sequence of returns risk: Why timing can be important in retirement

I Love Sushi on the Lake Bellevue