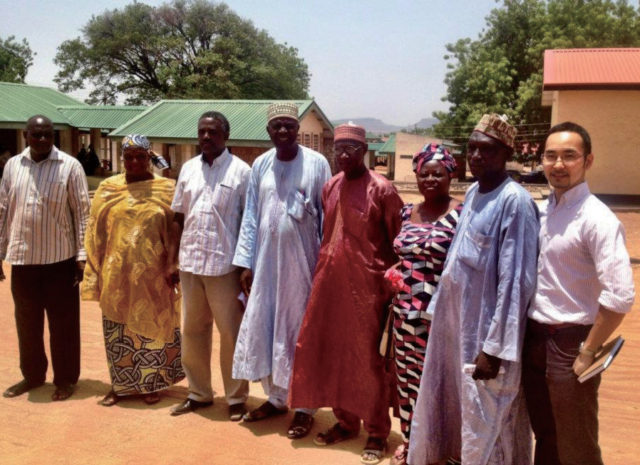 Shunsuke Mabuchi is a deputy director at the Bill and Melinda Gates Foundation in Seattle, who is making efforts to improve healthcare in developing nations. He has been involved in many international healthcare projects during his career. He has built a spectacular career with skilled leadership and management, and there were many points of interest to cover as we talked with him.

He started traveling the world as a backpacker

“Through my high school years, I was really into baseball. And when I got to university, I was pretty bad at English. I never thought I would be working on an international stage.” How did Mabuchi get to this place? The turning point was when he was a student at the University of Tokyo, and he traveled around the world as a backpacker.

“In Guatemala, I lived with indigenous people who sincerely hoped to improve their living conditions. I also remember seeing with my own eyes how friends my own age that I made in Nepal and Cambodia had limited opportunities,” Mabuchi said. He majored in cultural anthropology at university. He became attracted to the indigenous cultures in developing countries that were sophisticated in the opposite direction of the advanced countries. Through his college-age travels, he began to think that “I want to support people in the developing countries as well as understand and respect their diverse cultures.” This presented an opportunity for him to pursue work in international cooperation.

After graduating, he entered JICA to provide official development assistance from Japan. But as he worked there, he remembered realizing that “for me to get closer to what I wanted to achieve, I don’t have enough English ability or specialized skills.” To become the person he wanted, he chose to attend Harvard University’s Kennedy School. “Because of the influence of people I met during my Harvard days, my field of vision expanded,” he said. He was among elite people who would be the leaders of global public policy and international development, learning in the international environment and polishing his working skills.

After that, he entered the large consulting firm McKinsey & Co. Mabuchi went to the Japan office and later the South African office. He also worked at the World Bank and at the same time worked on his doctoral degree at Johns Hopkins University. “In the global health field, a research-like approach is necessary. You have to see what the merits are of implementing a new program, make sure it is effectively executed and contributes to society in each country. Since I was in university, I wanted to get a doctorate in development of developing countries. When I thought about having a family or growing older, I decided that was the time to challenge myself.” Was it extremely difficult handling the work of a doctoral degree while working a job at the same time? “I made my research topic related to my work, so it wasn’t like I was focused on two completely separate things. But it’s true that studying while I worked meant many interruptions, and it took a long time…” Once he received his degree, he was hired by his current employer, the Bill and Melinda Gates Foundation.

Originality expands with each new job

Mabuchi carved out a steady career in international development and private consulting, and he says his strength is his originality. “I worked in different types of jobs that required different specialties and skills, and as I experienced these different specializations, my originality became not just a series of random points, but a plane. If you combine different types of specialized skills, you can build a unique career profile.”

The reason the Gates Foundation reached out to him was, of course, because of his specialized knowledge of healthcare systems in developing countries, his insights into important projects with the World Bank, and his precise technique for solving problems and detailed strategy garnered from his private consulting days. There aren’t others like him. And that is his originality.

What is necessary when leading an international team to ensure success on a project? “Spirit, passion, and goodwill,” he says. “And a Japanese way of thinking. The ability to bring out harmony in an international setting is a strength. A Japanese style of thinking won’t always work in a Western setting, but having Western rational thought and persuasiveness coupled with understanding of the other person’s stance, human relations, and an interest in them, creating a relationship of understanding and consideration, especially in developing countries, leads to good results.” He says he learned this through past mistakes. “In exchanges with the Minister of Health in a country, we would logically push our agenda, and that made negotiations difficult.”

The outbreak of Ebola in West Africa in 2014 is fresh in our memory. Mabuchi led the emergency response team at the World Bank then. About 1.4 million people were infected, and he worked on the frontlines as a team leader, anxiously trying to stem the epidemic.  He contributed greatly to the reduction of the scale of the epidemic and its end. “The experience and sense of accomplishment during this time had a profound effect on my view of the work we do,” Mabuchi said.

Today, Mabuchi is the deputy director in charge of strategy, planning, and management. The work has a different appeal than the work at a company or an international organization, he says. “We can invest in new technology and approaches, and are able to take risks,” he says of his current job’s attractions.

Currently, Mabuchi has been in charge with team-wide strategy development and organizational transformation.  Mabuchi’s skill at putting teams together comes from his ability to visualize to people’s strengths and weaknesses and put together a balanced group.  It’s easy to think there is only one desired skill needed to succeed in American companies, but Mabuchi’s implementation is very Japanese. “There aren’t many people in the West who do the work like me, but the ability to bring harmony is huge. There’s a lot of value in it.”

Mabuchi is passionate about the Global Financing Facility, a financing facility for maternal and child health. Healthcare systems in developing countries can’t always help the ones who need it most. The big goal is to expand the reach of the fund until they can eliminate avoidable deaths.

Having children, these goals take on new strength. Mabuchi’s eldest daughter is turning 5, and his twin sons are 3. The sons were very difficult to deliver, and his wife faced some dangers while in labor. “Whenever I think back on that time, I ponder this. If it were in a developing country, I would have lost my two sons and wife in one stroke.”

Mabuchi says he wants to gather enough power to solve ongoing major health problems in developing countries, just like he managed to do leveraging the state of emergency during the Ebola outbreak. Children around the world suffering from poor health conditions, environmental challenges – he thinks about each of these big questions and dreams of a better world.  As a father of three, he has strong feelings about the need to support these measures.

The secret to success: go through hell to get there

On June 13, Mabuchi spoke at the University of Washington. He repeated the idea that going through hell is important.

People grow through challenges. They provide motivation in areas where you can take action. “For example, people think Americans are naturally good at presentations or debates, but that’s not really true. The Americans I work with work hard and polish their skills.”

How has he overcome so many obstacles along the way? “I don’t think I’ve overcome them,” he says clearly. “To overcome them, I strive today and every day.” Mabuchi’s glorious career didn’t start with a promise. It started with a challenging spirit and the willingness to make continuous efforts.

On June 13, the Seattle Networking Group (www.facebook.com/seattlewakate) hosted a lecture by Mabuchi. He spoke about his important experiences working for the Gates Foundation on improving healthcare systems in the developing world.
At the discussion following the lecture, Mabuchi, Kasumi Nagata of Pokemon International, former Gates Foundation employee and current freelance consultant Yuko Watanabe, and Satoko Ozeki of Microsoft discussed the difficulties and interesting points of working in an international job, and the secrets to success.
One of the topics discussed was the value of having a Japanese mindset and way of working when in this international setting. Everyone agreed that the ability to build one-on-one relationships and a willingness to cooperate contribute greatly to one’s work. The session went for a long time and was very energetic as people continued to discuss and ask questions.

Bill & Melinda Gates Foundation
500 5th Ave. N., Seattle, WA 98109 | www.gatesfoundation.org
Bill Gates, one of the founders of Microsoft, and his wife, Melinda, established the foundation in 2000. This charitable organization with a global reach is based here in Seattle. With a vision that “every life has equal value,” the foundation focuses on three sectors: international development, global health programs, and its US program. Within this, the development and support of healthcare systems in developing countries is one of the larger projects.

After graduating from the University of Tokyo, he entered the Japan International Cooperation Agency (JICA). In 2007, he finished his master’s in public policy at the Kennedy School in Harvard University. He worked in the Japan and South African branches of McKinsey & Co., then got his doctorate degree in public health at Johns Hopkins University. He finished that degree while working at the World Bank. Today, he works at the Bill & Melinda Gates Foundation as a deputy director in charge of strategy, planning, and management.

Interview with Ken Taya aka ENFU