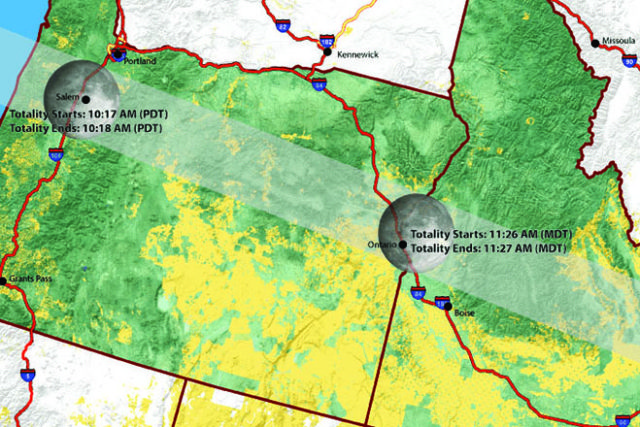 THE TEXT MESSAGE came at 11:28 p.m. on Saturday, August 19. The Tom Petty concert, at Safeco Field, was over. My friend, Steve and his brother would be coming by to pick me up as soon as they could get out of the congested stadium area. My bags were already packed.
I started opening multiple cans of cat food, for my younger cat, who must have thought he had gone to heaven. For his mother, I filled her dish generously with her normal kibble. They would be managing on their own for a few days for the first time. Then, hearing a car outside, I was out the door.
In 20 minutes, we stopped at the next house, to change cars and pick up two others. As at my home, the process went swiftly, for they, too, had been on standby. Then, with few words, four of us stole out of town like thieves in the night. It was 1:30 a.m.
Our destination was Sun Valley, Idaho. For while central Oregon had been the “center of the universe” on which the Seattle media had focused, Sun Valley was the only place we could find accommodations in late May, when our plans began to take firm shape. At double the distance, by default we would be viewing the eclipse as contrarians, doing what the Seattle crowd was not. Owing to our late start, we had decided to drive through the night. This also solved our secondary dilemma of not having secured housing for that night.
Our drive to south-central Idaho remains something of a blur. Yet, I found in that quiet space, reminders of my family’s three-generation journey.
In zooming past the Snoqualmie Ski Area, I was reminded of learning to ski there with the Rokka Ski Club. On their Nisei-organized bus, kindly ladies such as Yone Nakako, my mom’s good friend, would share their onigiri with my siblings and me.
On Sunday morning, when we stopped to stretch our legs and snack at the Baker Valley Rest Area, about half-way across the northeast corner of Oregon, I found that I remembered an interpretive sign describing an isolated tree that had rooted far out on the plains in the Oregon Trail days. “The Lone Tree” had served as a landmark for settlers, just as the sign did for me.
I had been there before. On further thinking, I realized that it had been in 2006, on a Minidoka Pilgrimage. Then, I had felt that the story of that remarkable trip—organized by funny “bus mom” Gloria Shigeno and others—would vaporize if I didn’t write it up. And so, a column of that trip became my first “Sansei Journal” column.
Near noon, we arrived in Nampa, Idaho, where we stopped for late-morning coffee at the Starbucks in Target. I shared with my car-mates how Nampa had been the Yamaguchi family’s ticket to freedom during the madness that was World War II. Nampa is near Caldwell, Idaho, just as my father had said. It was the location of the Japanese-American farm that had offered the Yamaguchi family their first mid-war jobs. Grandpa especially had needed a job, as his wartime papers show his status was that of a “parolee” from Dept. of Justice detention. I still wince at the thought of a prominent Seattle businessman being reduced to filling out government forms as a “farm laborer.” Still, it had been the beginning of his midlife start anew.
On the approach to our turnoff, the highway signs for Twin Falls beckoned. My mom had taken day trips there to go shopping—from Minidoka (near Jerome)—before Dad, my siblings, and I were in her picture.
AFTER 13 HOURS, we found ourselves in Sun Valley at last, without once encountering the anticipated clogged roadways that had kept us “pedal to the metal.”
After a simple dinner, we set out to explore a bit. We needed to scout out a location with a clear view of the sky for observing the eclipse the next morning.
As luck would have it, neighbors of two of my travel-mates from Lake Forest Park, were staying a few minutes from us at a rustic cabin on the edge of town. The cabin is situated in an isolated mountain valley. It is just the kind of place we had been hoping to find. They invited us to join them in the morning, which we happily accepted.
Their host, “Stella,” had a big smile and was more than hospitable. She traced the path in the sky that the morning sun takes over her cabin. (I had wondered if the valley was too narrow). She is an eighty-year-old former realtor whose own second-start had been as a divorcee with two kids and only $50. A glance at her rustic but adequate cabin and outdoor dining shelter—one of two of her properties (the other is at lower elevation, away from the heavy winter snow)—told us that she had done well enough in life.
Declining Stella’s invite to stay for a late dinner (we were tired from our drive), we made our way to Atkinson’s Grocery, in town, to forage for contributions we could add to her brunch table. And then we turned in.
(To be continued)

SANSEI JOURNAL: A Painting in Need of a Home