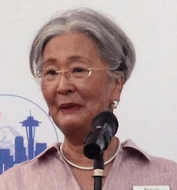 Oral communication is a key skill for all persons and age groups. Dare I say, it is one that is underdeveloped in the Nikkei and Asian communities. At all stages of life, one needs to be able to pass on knowledge and to get the point across effectively. The young tend to ask questions, the elders love to tell stories and impart wisdom learned through hard lessons. But at least among my generation of Sansei raised in the 1960s and ‘70s, we were taught and shown to keep our noses to the grindstone, to work hard and let our school grades and work products do the talking for us. It was important to excel at whatever we did and equally important to not talk about it! Most of us grew up staying more or less in the background, choosing professional careers if we could, and avoiding being in the public limelight. Speaking in front of others? Never by choice!

However, the past few pandemic years have led to all of us becoming more isolated. The consulting job I accepted that moved my family and me back to Seattle had promised to put me back into an office environment, which I had missed working from home in my previous job.

While in that job, I joined a local Toastmasters International club in early 2017, just to have some professional comrader y. Soon I found myself rehearsing speeches, practicing my delivery, and truly enjoying the process of learning to communicate effectively while standing in front of a group of like-minded individuals also striving to improve themselves. I stuck with the club, participating diligently about three times a month for nearly three years, until it was almost time to move, in November 2019.

What I learned about myself is that I had probably been a terrible lecturer in my main career as a professor! I spoke in a monotone and relied too much on notes and diagrams. My logic was often presented in reverse order and I was really great at putting students to sleep! More than anything, my lectures and speeches lacked PASSION. Did I truly believe in what I was talking about? Of course! Could anyone tell? Nope!

Passion, I now believe, is what can move mountains where people are concerned. The same information can be delivered with or without emotion, inflection, and timing – with totally different results.

Does passion mean acting? No, audiences are really good at picking up insincerity. It means being able to show both verbally and through your actions that you really mean what you are saying! And that you can move the heart of a man or woman through your words.

As my professional career is entering its final phases, I now lament how much I could have used the training and practice provided by Toastmasters earlier in my career! It would have helped me to accomplish and teach so much more!

To those who are ending their careers or have even entered retirement, I say it’s never too late. Why not start now?

Ph D. , Professional Engineer (P.E.) is beginning a new series of public speaking work shops entitled “Passionately Speaking,” to be held on alternate Sundays at the Japanese Baptist Church, 160 Broadway, in Seattle. An informational session will be held at 12:30 pm, Sunday Sept. 11, and sessions will be held throughout the fall-winter session.