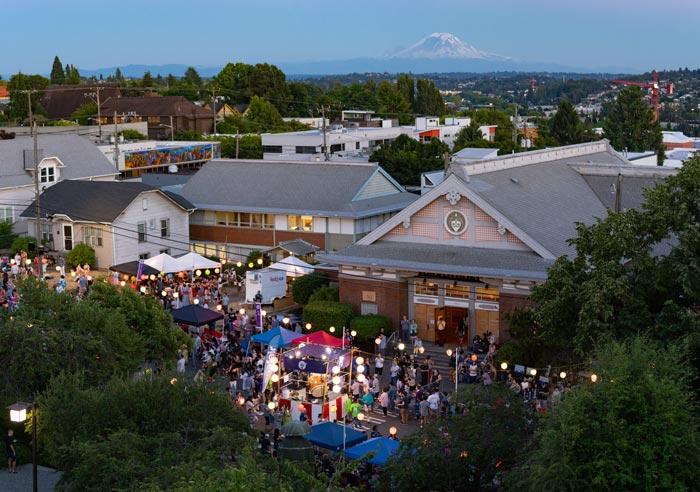 Seattle Betsuin Buddhist Temple will host its annual Bon Odori virtually. According to Ron Hamakawa, chairperson of Bon Odori, the temple had to plan the event earlier this year without knowing summer vaccination rates nor changes in state regulations; so it decided to go virtually like last year to protect community members.

This year, in addition to enjoying dance and taiko performances on YouTube Live, viewers can purchase festival food online for drive-through pickup on the day of the event. The menu includes yaki-onigiri, nikudon (beef bowl) and grilled teriyaki burgers, as well as saketini and summer berry-sake sangrias. Merchandise products such as tenugui and T-shirts are also available for sale.

Hamakawa, who has chaired this event for over fifteen years, expressed his sentiment about Bon Odori.

“It is my favorite time of year. This is my family tradition as I used to go to Bon Odori with my grandmother as a child. This is the same for everybody. It is awesome to see young people who now live out of state come back to our community and join in Bon Odori. This is a family and neighborhood reunion opportunity. It is virtual again this year, but I hope we can celebrate it big next year as it will be the 90th anniversary.”

According to Kazuo Ito’s “Hokubei Hyakunen Zakura” (1969), Bon Odori started in Seattle’s Nihonmachi (Japantown) around 1900. It began as a small gathering of dancers in front of Japanese stores such as Maneki and Sagamiya, which sold festival foods on the street. By the 1920s, the event was organized by the Japanese Association and Seattle Betsuin (then located at S. Main  and 10th Avenue), with permission granted by the city. Over 600 people danced around four blocks, Sixth and Maynard Avenues, and S. Main and S. Lane Streets. Each kenjinkai performed its regional dances. White spectators also came to see this ‘Japan Night.’ Everybody looked forward to Bon Odori. Many took dance lessons to prepare.

The Nihonmachi Bon Odori ended in the early 1930s when political conflicts between Japan and U.S. surged.

Although it is virtual again this year, the festival continues for the Nikkei community and for the sake of history.