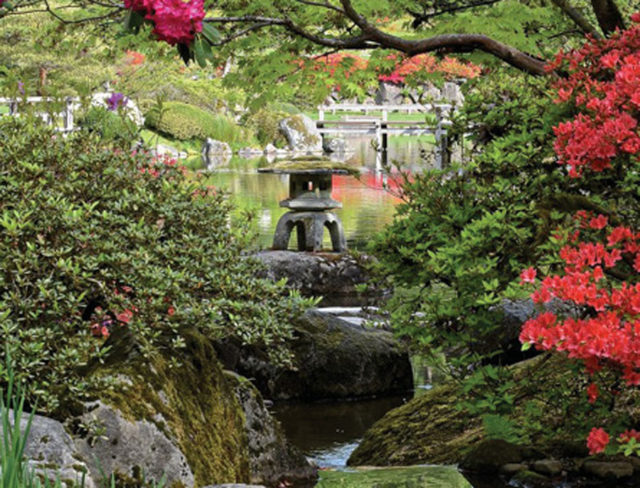 June 5, 2020 marks the 60th anniversary of the opening of the Seattle Japanese Garden at Washington Park Arboretum. Accordingly, special programming is underway across summer and autumn to celebrate the occasion. The garden has adopted the theme of “kanreki” for the events, which means one’s 60th birthday. It is a time of rebirth and renewal.

As the garden remains temporarily closed to the public, early kanreki content is being shared on the garden’s website (seattlejapanesegarden.org), with onsite continuation planned for later in the year. An exceptional example is Michelle Kumata’s “Northwest Nikkei” art installation, which is online through June 30.

Managed in partnership by Seattle Parks and Recreation and the Arboretum Foundation, the 3.5-acre public garden is a cultural treasure for our region. Its design was inspired by the “stroll gardens” of early 17th-century Japan. These invite visitors to journey along winding paths through Japan’s varied landscapes: mountains, forests, waterfalls, rivers, lakes, islands, and the sea. About 800 tons of local Bandera Mountain (Snoqualmie Pass) boulders were used to create the Seattle garden’s dramatic waterfall and other landscape features.

New at the garden this year is a special partnership with Green Legacy Hiroshima (GLH; glh.unitar.org). GLH is a Hiroshima non-profit organization that distributes seeds from trees that survived the atomic bombing. In January, the Seattle Japanese Garden became the first partner in the Pacific Northwest to receive GLH seeds. The partnership furthers the long and meaningful relationship between Seattle and Japan, acknowledging the past while shaping a greener and more beautiful future. The garden staff advises keeping an eye on their website for developing details of the kanreki anniversary events.

To place Seattle’s Japanese garden in context with its peers, There are over 100 such gardens in the U.S. Several of these are listed in the table below. Of these, Seattle’s makes the “best ten” or “best 15” lists consistently. Three such polls posted online since 2010 are those of Sukiya Living Magazine (rothteien.com, 2013), USCityTraveler.com (2014), and JapanObjects.com (2018). In these, the Seattle Japanese Garden’s average rank is 5. Here, it tracks closely behind that of Portland, Oregon, which holds the lead at 1. Notably, the Japanese Garden in Bloedel Reserve, Bainbridge Island, also makes two of the below lists.

In time, the Seattle Japanese Garden places toward the early end of such gardens in North America (table). The listed gardens show that US-Japan relations changed in the 1950s. Most gardens follow the signing ot the Treaty of San Francisco (1951, effective April 1952), which reestablished peaceful relationships between the Japan, the U.S. and other countries. After this agreement, Japanese garden specialists resumed travel overseas to work with North Americans to develop Japanese gardens.

Seattle Japanese Garden is one of the most highly regarded Japanese-style gardens in North America. Tucked within a vast arboretum in a fast-growing city, the garden attracts over 100,000 visitors annually.