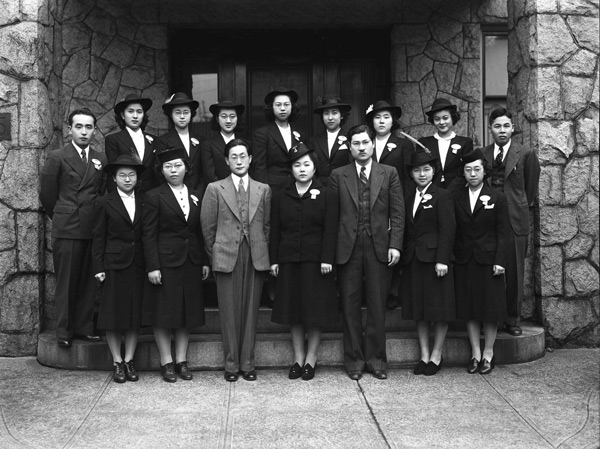 September 1 was the 120th anniversary of “The North American Post.” To mark this significant milestone, author Ed Echtle has researched the history of this newspaper and that of its pre-WWII predecessor, “The North American TImes.” This article is the second of a three(?)-part series that will continue monthly into October.

In November 1941, Sumiyoshi Arima departed for Japan leaving his younger brother Sumio in charge of the “Times.” On December 7th, news of Japan’s military attack on the Pearl Harbor naval base in Hawaii led federal authorities to immediately arrest pre-selected Nikkei community leaders as potential spies and collaborators. Sumio Arima was among the 264 Seattle residents taken in the first sweep and incarcerated and interrogated at Fort Missoula, Montana. Arima did not regain his freedom until war’s end.

With limited resources and little time, the “Times” managed to publish its next regularly scheduled issue on December 8th, the only Japanese language newspaper to do so in the US. With its remaining associate editors Terumitsu Kano, Takami Hibiya, and English editor Budd Fukei, the “Times” carried on despite having its financial assets frozen by authorities.

After President Franklin D. Roosevelt issued Executive Order 9066 in February, clearing the way for the military to remove Nikkei from the West Coast, events moved quickly and the “Times” did its best to keep its readers informed. On March 14, 1942, the “Times” published its last edition. The front page featured a notice in English by Budd Fukei, bidding readers farewell. While expressing regret that the “Times” could no longer serve them, Fukei reaffirmed the “Times’” support for America:

The military first removed Japanese residents from Bainbridge Island on March 30th, due to its proximity to the Bremerton Naval Shipyards. By April, the removal of Seattle’s Japanese residents was underway to temporary quarters at the Puyallup Fairgrounds. By August, most had arrived at Minidoka in the Idaho desert, where most would remain for the next few years.

The US war with Japan came to a close in September 1945 in the aftermath of the atomic bombing of Hiroshima and Nagasaki. Lingering hatred by whites directed at Nikkei made returning to the West Coast problematic. However, many came to Seattle either because they had lived here before the war or they had formerly lived in smaller communities and were seeking a sense of safety through community connections.

As they arrived in Seattle, those formerly connected with the newspaper business decided to reconstitute the “North American Times” as the “North American Post” (“Hokubei Hochi”) in 1946. The new publishers included Sadahiko Ikoma and Kunizo Maeno. Sumio Arima returned as editor-in-chief.

Ikoma was born in Japan in 1890 and traveled to the US in 1908 where he found work in salmon canneries. He eventually apprenticed and began work as a journalist in the Tacoma Nihonmachi at the “Tacoma Japanese Weekly” (“Takoma Shuho”) before he became publisher of “Takoma Jijo” prior to the war.

Maeno arrived in the 1920s and worked in agriculture before operating a beer distribution business after the end of Prohibition. After the war, Maeno helped establish the Japanese Placement Service to assist returning Nikkei find work.

Sumio Arima was released from detention in Texas and made his way back to Washington where he settled on Bainbridge Island. There he was approached by Ikoma and Maeno to resume his work as a newspaperman. However, his term as editor was short when he became overwhelmed with the amount of work needed to restart the “Post.”

To generate content, the “Post” tapped past contributors and staff. A few who had worked at the “Times” returned, including Terumitsu Kano who also took on editorial duties. The “Post” secured Sumiyoshi Arima, residing in Japan, as a correspondent who submitted regular columns including “Tokyo zakki” (Tokyo miscellany) and Tokyo zuiso (Tokyo Jottings) under the pen-name Hanazono lchiro. Among the well-known contributors was Kyuin (Rokkei) Okina who wrote a series of reminiscences of his time in pre-war Seattle.

To expand its visibility in the community, the “Post” occasionally sponsored community events. Beginning in 1946, it partnered with the Tengu Club to sponsor an annual Blackmouth (Chinook) salmon fishing derby on Elliott Bay. The contest was open to all ethnicities and offered a $200 prize for the largest catch over the four-day event. The “Times” also tried again to add an English-language section in 1947 to attract the ever-growing numbers of Nisei as new readers. However, the effort was discontinued the following year due to difficulties associated with typesetting in two different languages.

In 1948, the “Post” regained use of the former “Times” office at 215 5th Avenue South. As its readership and ad revenue increased, the “Post” went from three issues per week to daily publication. By then, Washington’s Nikkei population was nearing 10,000 with more than half residing in Seattle.

In 1951, Henry Takemitsu Kubota became the new publisher of the “Post” and Terumitsu Kano took over as the new editor-in-chief. Kubota was born in Japan and arrived in the US at age 21. After working in Montana on a railroad construction crew, he came to Seattle in 1932. He began investing in properties and eventually owned the Seattle Hotel at Second and James, property at First and Madison, and the Wilsonian Apartments in the University District. (See related story, Ikuo Shinmasu, “Flourishing Japanese Hotel Businesses,” napost.com, Aug. 12). During the war, Kubota used extended family connections to leave Minidoka and reside in Denver while his Seattle businesses were maintained by property managers. By the time he took on the “Post,” he was a wealthy, well-established leader in Seattle’s Japanese community.

The following year, Seattle businessman Henry Heiji Okuda joined the “Post” as president. Born in Japan in 1867, Okuda arrived in the US in 1895 and came to Seattle in 1898. After some months working on a railroad section gang in Montana, he returned to Seattle where he founded the Oriental Express transfer company. His business interests also included Okuda and Shibagaki, Inc., established in 1920 to import fishing gear from Japan. As a leader in the community, Okuda organized the Hokubei Butokukai (North American Fencing Club). At the outbreak of WWII, Mr. Okuda was among the Seattle Nikkei leaders taken to Fort Missoula. Using family connections, he left camp in 1942 and went to Spokane before joining his family in the camp at Granada, Colorado.

The 1950s were a period of rapidly changing fortunes for Asians in the US. In 1952, the US Congress passed the McCarran-Walter Immigration Act, ending the ban on naturalization and many long-term immigrants became citizens. In addition, returning soldiers brought Japanese brides to the states. A second wave of immigrants, the Shin-Issei, also began arriving to pursue higher education and careers in the US. More affluent and better educated than earlier Issei arrivals, they were eager to read about life in America in the “Post,” written in their native language.

Meanwhile, non-Asians increasingly patronized restaurants, groceries and other businesses in Seattle’s Chinatown, Nihonmachi and “Little Manila.” City officials rebranded these overlapping communities as the “International District.” In 1954, Des Moines schoolchildren visited the district and toured various businesses and organizations. Reporters from the “Seattle Times” captured the event, including the students’ tour of the “Post” news office and printing operations with typesetter Jiro Kaneko (photo, 6/20/54).

As its readership grew, the “Post” once again reorganized, with Terumitsu Kano as president, Kunitaro Tanabe as treasurer, and Shigetoshi Watanabe as secretary. Sadahiko Ikoma stepped down as editor and Shigenobu Hieda served as editor briefly until succeeded by Takami Hibiya. The latter was another “Times” alumnus. After returning to Seattle after ten years in Chicago, he shared editor’s duties and remained on staff into the 1980s.

By 1958, Haruo Hashiguchi assumed the role of editor of the “Post,” sharing duties with Terumitsu Kano, who served as vice president, before Kunitaro Tanabe replaced him.

By the late 1950s, the “Post” circulation remained approximately 3,000. Even then, the staff was grappling with the changing demographics of the Nikkei community and what it would mean for the paper’s future. Terumitsu Kano confided in a “Seattle Times” interview his sense of what was to come.

“We’ll have to change” (to English). Most Nisei can’t read or write Japanese even though they may speak it fluently.”

Edward Echtle is a public history consultant and preservation professional based in Tacoma, Washington. He specializes in immigration and labor history in the Pacific Northwest and has worked on projects for the Wing Luke Museum, Historylink, the City of Olympia, and Ron Chew of Chew Communications.

Interview with Karen Yoshitomi, Custodian of the Japanese Cultural and Community...