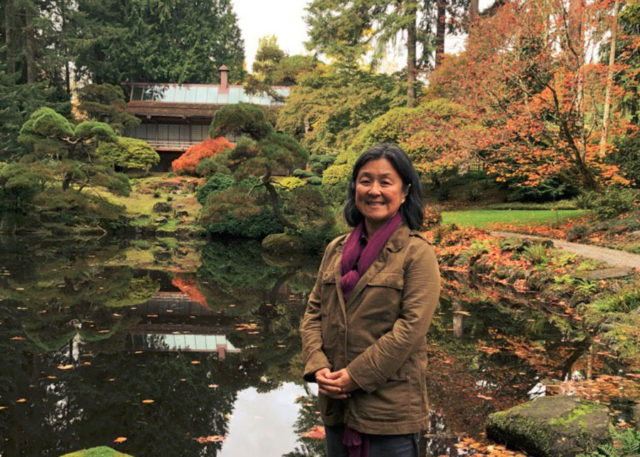 Joy Okazaki has served on the board of the Kubota Garden Foundation since its inception in 1989. She has served as the Foundation’s chair since 2012. She grew up in the Rainier Beach neighborhood and graduated from Rainier Beach High School and the University of Washington. Over the years, she has been a project manager for architect firm Portico Group, worked for the City of Seattle Parks & Recreation and has served as a senior project manager for Turner Construction. Today, she has a project management consulting business Hikari Consulting. She lives in Edmonds with her husband and 10-year-old Akita dog Kona.

When Joy Okazaki was a child in the third or fourth grade, she used to sneak into the then privately owned Kubota Garden and explore. It was less than a mile from her house. “I’d find tadpoles, frogs, see the bridges and the ponds. I didn’t even know it was a garden,” Joy says. Little Joy had no idea back then just how profound adult Joy’s connection to this 20-acre garden would become.

After graduating from the University of Washington with a degree in architecture in 1988, Joy joined the newly formed Kubota Garden Foundation board the following year. Back then, she says she joined the board mostly out of curiosity. “I thought it would be interesting to see how a nonprofit organization starts at the ground level.” But there was so much work to be done—so much profound work—that she never left.  Joy has been serving on the Foundation board for 31 consecutive years and has been board chair since 2012.

During those 31 years, Joy has seen enormous change in Kubota Garden. The South Seattle jewel has gone from a hidden gem to a ”must see” for tourists, garden enthusiasts, and anyone looking for respite from the ever-expanding urban crunch of modern-day Seattle. In 2014, the garden drew over 56,000 visitors. In 2019, it exceeded 108,000. “Back in the 1990s, we used to go to the Northwest Flower and Garden show just to tell people where the garden is,” Joy says with a laugh. “The most common question we were asked was, ‘Where is Kubota Garden?’”

The Foundation is expecting interest in the garden to continue to grow, not least because it has recently released a new documentary and book about the garden.

But back in 1989, a book and a documentary were distant dreams. The focus of the board then was to support the city’s efforts to preserve the garden. “We were doing a public-private partnership before that phrase was coined,” says Joy. “The Foundation gathered support from other organizations, recruited volunteers, provided programming, conducted tours, and provided publicity.” The city had budget constraints, so the Foundation supported its efforts where it could.

Back then, the board innately understood the history of the garden. Created by an immigrant from Japan, Fujitaro Kubota, this garden has held an uncanny allure for many who encounter it. Perhaps it is because of the spirit Fujitaro infused the garden with, says Joy. “When people used to ask Fujitaro Kubota how he was going to do these things he planned for the garden, he would say, ‘Kami-sama will take care of it,’” Joy recalls. “You know, there’s something to be said about that. The garden connects with people. Once they connect, they want to help. It’s like magic!”

But the Kubota family was never keen to be in the spotlight. They didn’t want to appear to be bragging or to be using the Foundation as a charity. It would take several decades for the full and quite amazing story of this garden to be told. To get to that point, much work had to be done.

In the 1990s, the board and volunteers concentrated on learning and documenting the history of the garden. They interviewed Fujitaro’s son, Tom Kubota, started a newsletter, created a Wikipedia page and a rudimentary website, and began to assemble a pretty strong history and chronology of the garden. They also started preserving the many family photos that chronicle the Kubota family through the 20th century. Those photos are now preserved in the Foundation archives and online at the Densho Digital Repository.

“Joy’s visionary stewardship of Kubota Garden is grounded in her deep knowledge and connection to the Japanese American community,” says Densho founder and long-time friend Tom Ikeda. “Joy was instrumental in digitally preserving hundreds of historic photographs and documents of the garden so that researchers, historians, and families will be able to view them for many generations in the future.”

That idea of making the garden sustainable well into the future has driven much of Joy’s efforts over the decades. “We have to make a connection with the kids, make them love the place,” Joy says. “They are critical because they are the next generation of stewards. That’s why we started programming for kids like the scavenger hunt tour and soapstone carving workshop.”

The popular workshop is held annually and draws a lot of interest from children in the area.

Around the turn of the century, after a decade of researching the garden’s history and raising awareness about it, some people on the board began to talk about putting the history into a book. “We probably started talking about it 15 years ago,” Joy says, “but we didn’t have the means. So the old photos and clippings just sat in a plastic tub. We didn’t have the seed money. We were barely able to get small funding for projects in the garden back then.”

A few years ago, the Foundation started getting grant funding. First, they focused on organizing their archives. “That was the priority,” Joy explains. “The film and the book couldn’t exist without the archives.”

The film and book projects took different paths but ended up coming out at about the same time. The documentary debuted at Ark Lodge Cinemas in December to overwhelming demand. “The crowd was so huge at the premiere of ‘Fujitaro Kubota and His Garden’ at Ark Lodge Cinemas last week that a second screening was added, and some eager theatergoers were turned away,” reported the South Seattle Emerald back in December. The film continues to draw large, enthusiastic crowds. A showing is scheduled at the  NVC Memorial Hall on April 25, and other showings are in the works, Joy says.

The book project was spearheaded by a bibliophile on the Foundation board, Joy says. “Elizabeth Butler has a love for the garden and a love for books and literature. She organized an editorial committee to shepherd the book through the publishing process with local publisher Chin Music Press.” (Full disclosure: that company is owned by Bruce Rutledge, writer of this article.)

“We kind of knew this was the right time to tell the story of Fujitaro Kubota,” Joy continues. “He’s an immigrant from Japan who despite anti-immigrant sentiment built a business that flourished, was wildly successful, and then had everything taken away from him during World War II when he and his family were incarcerated. Then he came back and rebuilt his business. That story sings in this current environment.”

Indeed. And while the Foundation hopes the book and the documentary will raise awareness of Kubota Garden well beyond King County, the ever-practical Joy stays grounded and focused on the garden’s immediate needs, such as restrooms, better parking, and concerns about stormwater overflow.

The Foundation and the City of Seattle have been working closely with the Foundation’s Garden Committee to implement aspects of the 2019 master plan drawn up by the landscape architects for the garden. One of the first issues the master plan raised was a lack of restrooms.

“We have a 20-acre garden with over 100,000 visitors and no restrooms. That’s embarrassing!” Joy says. And, thankfully, it will soon change. The Foundation won a state grant for nearly $1 million to bring restrooms with sinks and flushing toilets to the garden.

“This master plan is not one that will just sit on the shelf,” Joy says. “We’re beginning historic renovation of the older area called ‘The Japanese Garden’ and planning an expansion of the parking lot because the cars are overflowing into the neighborhood and onto adjacent streets.”

Joy says that the Foundation is also starting to look beyond the garden. “When we first started, we were really focused on the garden. But little by little we’ve started working with the city, encouraging them to buy property around the area to protect Mapes Creek, protect the views, and provide a buffer for the garden. We’re also beginning to look at the effects of stormwater runoff and what the issues are on the hillside to the south that are causing the overflow.”

The Rainier Beach neighborhood where Kubota Garden sits has changed a lot in the last few decades.  Today, Kubota Garden plays an even more prominent role in the fabric of the community, providing a vital oasis in a fast-growing city. “We want to make sure people know how important it is to have a place like this instead of more urban density,” Joy says. “We want to make sure the garden and the Foundation will be there in the future.

“Kubota Garden has always been one of those special places for me,” Joy continues. “When I ask myself why I care so much about it, I think it is because of the connection I made when I was a kid.”

Perhaps another person who spotted tadpoles and ran over the Moon Bridge as a child will soon emerge to join Joy and the Foundation in making sure Kubota Garden never goes away.

The garden is open daily and free. You can take a self-guided tour by picking up a detailed map and guide at the metal box near the kiosk at the entrance. For larger parties, tours can be scheduled by filling out a request form at this link: http://www.kubotagarden.org/visit/tours/. Public tours led by a Foundation docent are also held year-round on the 4th Saturday of each month at 10am. The tours leave from the parking lot. For more on the Kubota Garden Foundation, please visit its website /www.kubotagarden.org or its Facebook page.

Documentary film “Stories from Kubota Garden” and book preview will be hosted at NVC Memorial Hall on April 25th from 2pm.

*As notified on March 12th by event organizer, the April 25th event at NVC Memorial Hall is cancelled due to the regional social distance policy that bans events over 250 people to slower COVID-19 outbreak.

“Spirited Stone: Lessons from Kubota’s Garden” will be released by Chin Music Press on March 17.