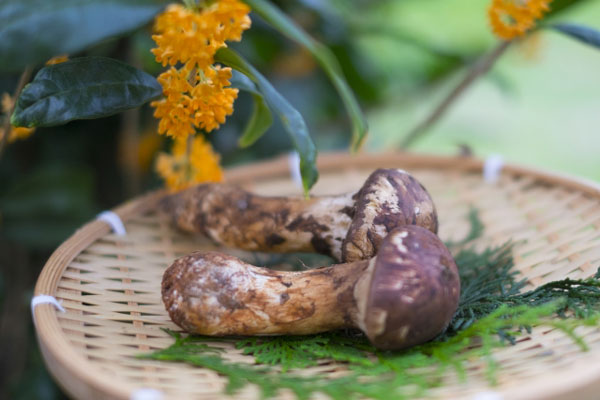 In early fall in October, at home in Oyster Bay after the rains began, we would drive to a patch of woods north of Shelton. My mother called the area “sunayama” or sand hill.

We would put on hip boots, if the brush was wet. We would head out into the forest with a plastic bag in one hand and a short stick in the other. After much poking under the salal bushes, around the bases of tall fir trees or under emerald green moss, if we were lucky, we would have a bag full of white “mattake” —as my father called them—or matsutake mushrooms in a few hours.

I remember the distinctive, earthy smell that infused the car after loading them for the trip home. Mom would collect dry, brown bracken ferns and carefully put them into another bag, placing it in the car trunk alongside the mushrooms.

We would drive home with our treasures.

Mom would spread the matsutake on a newspaper on the basement floor near the wood stove along with the ferns she had picked. She picked out the best-looking ones, especially those that had not spread out their gills yet and had not turned brown. These were the best tasting and most prized.

Some of the remaining matsutake were taken to the kitchen for us to eat for dinner. Sometimes, especially at the beginning of the season, we would eat them right away. Mom would wrap them in tinfoil with a little butter and bake them in the oven. As soon as they were done, the foil packages would be set out on the table and the mushrooms sliced.

We would gather around the table with hashi in hand and eat the mushrooms right out of their foil packages. We dipped the slices in shoyu before popping them into our mouths.

After a couple of days, Mom would inspect the remaining mushrooms that were fairly dry to touch from the warmth of the stove. Gathering some cardboard boxes she had been saving, she put the dried ferns in each box. Then she carefully laid a few of the choice mushrooms in each box.

The boxes were closed with tape, and then some holes were punched in each box. Mom would write addresses on the boxes to places such as Seattle, Sacramento, Fresno, and Los Angeles.

I think she really enjoyed doing this, as it was for her, a means of keeping touch in touch with old friends as well as relatives. In return, we would later receive a box of persimmons or some dried figs shipped from California. As a kid, this was my introduction to persimmons and dried figs that I had never seen before.

In retrospect, this was a lesson of generosity and reciprocity from my parents—through their actions—and how the recipients repaid that generosity.

I think in the Japanese culture, this would be “On” and “Giri,” concepts of generosity and obligation.

Joe Abo, of Bremerton, is a retired federal engineer. He grew up on an oyster farm near Olympia and is a graduate of the University of Washington. He and his wife, Mary, are longtime members of the Omoide writing group.