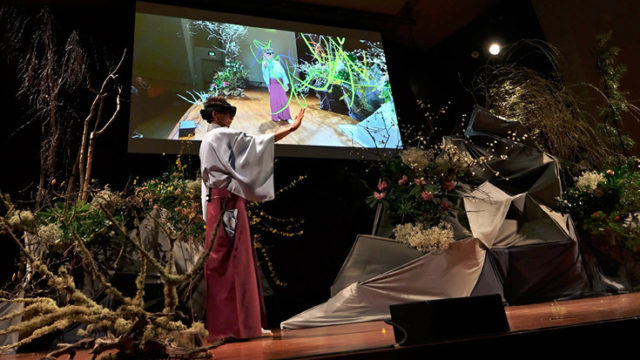 The Benaroya Hall stage was the setting for a giant ikebana demonstration in late February that incorporated mixed-reality technology from Microsoft.

The blending of traditional Japanese culture and 21st century tech was the brainchild of Consul General Yoichiro Yamada and Fifth Headmaster of the Ohara School of Ikebana Hiroki Ohara. Yamada said that he reached out to Ohara to see if there was a way to blend an ikebana demonstration with cutting-edge technology. The Consul General said he wanted to use a new technology like mixed reality in a way that would enhance traditional culture, not replace it,  to show a side of tech that “is human and harmonious, not just empowering and enriching.” The results were fascinating.

The stage was decked out with rough versions of Mt. Rainier and Mt. Olympia. An opening taiko performance by local group Chikiri got the energy flowing. Then, Ohara and his team brought out plant material sourced from local gardens to create a large-scale ikebana display. The mountains were decorated with weeping willow branches, black bamboo, plum branches covered in moss, rhododendrons, camellias,white magnolia branches, and other natural material. Ohara walked the audience through the reasons behind every branch and flower, explaining his choices with emcee Lori Matsukawa. The moss on the branches? To express age. The dramatically cascading weeping willow branches? To evoke the presence of kami (spirit), but also hint that a ghost may be lurking there.

Ohara then donned a mixed-reality headset called the HoloLens 2, launched by Microsoft last November. The crowd saw what he saw on a large screen above the stage. Ohara began to pick and pluck in the air, creating swirls of color on the screen that added to his original ikebana creation. He briefly created a Seattle cityscape on the stage floor and unleashed a waterfall with the flick of his wrist. “When I was creating (the mixed-reality display), I had in my mind the atmosphere, how the water would feel cascading down, not just the visual aspect,” Ohara said afterwards.

It was an interesting exercise, although the additions of colored swirls in the mixed-reality version of the display had the hint of MacPaint, indicating that we are still in the nascent stages of mixed-reality technology. The demonstration also had the added value of highlighting the natural beauty in our region as seen through the eyes of Fifth Headmaster Ohara, a rock star in the ikebana world.