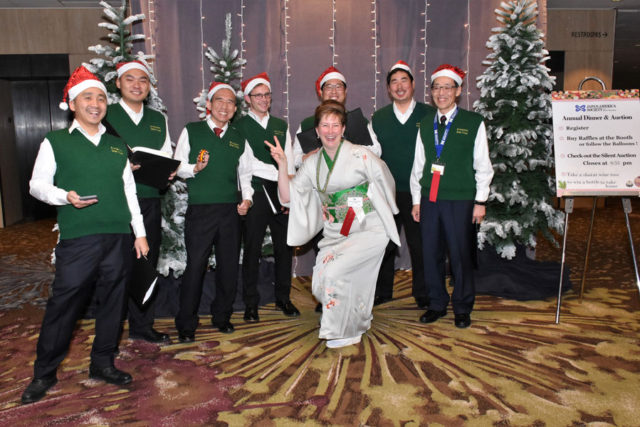 As the international business protocol liaison for the Port of Seattle, Karin Zaugg Black is in her element. She supports international relations across all platforms of the Port, from its cargo and airport activities to its cruise-ship business, and even to the North Pacific Fishing Fleet that sails out of Fishermen’s Terminal. Zaugg Black calls this her “dream job.” That’s because she is motivated by bringing people together, making connections, and finding the common threads that bind people together for mutual gain. She’s been doing that ever since she got involved in the Seattle-Tashkent (Uzbekistan) sister-city relationship during her student days at Garfield. We sat down with Zaugg Black to talk about her work for the port, her extensive Japan ties, and her role as chair of Japan-America Society of the State of Washington (JASSW), which will be holding its holiday dinner on December 3 at the Westin Grand Ballroom.

Interview by Bruce Rutledge  Photo Courtesy of: Karin Zaugg Black and Japan-America Society of the State of Washington

“I love people, and I love building connections with people, especially internationally, for mutual benefit. It’s my dream job to promote Seattle and increase our international connections.”

Karin Zaugg Black grew up in the Capitol Hill area of Seattle and went to public schools (Stevens, Meany, and Garfield) before spending a year in Hiroshima as an exchange student. She graduated from Pomona College with a degree in Asian Studies, furthered her studies at Doshisha University in Kyoto, and landed a job in international relations with the city of Kobe through the Japan Exchange and Teaching Programme. After working in Kobe for three years, she returned to Seattle and got involved in the Seattle-Kobe Sister City Association, an organization she chaired for 18 years. Today, she serves as the international business protocol liaison for the Port of Seattle, is the chair of the Japan-America Society of the State of Washington and gives widely and generously of her time serving on boards connected to international trade.

You grew up in Seattle, right? How did you first get interested in Japan?

Yes, I grew up here in Seattle in a very diverse neighborhood on Capitol Hill. I went to Stevens, Meany, and Garfield if you are looking at the public school pattern. My kids are now in that same pattern, which is very gratifying for me. My family spoke German growing up, but I had friends at school speaking Japanese, Chinese, Korean. I was very interested in Asia. My parents were very strong proponents of learning, being international, being an exchange student. When it became my turn to be an exchange student, I said, I don’t want to go to Europe. That’s where my parents were. I was very focused on Asia. I went on the AFS program in high school. I graduated from Garfield early and lived in a rice-farming village in Hiroshima Prefecture. My Hiroshima high school year was very transformative for me. I was the first exchange student that they had ever had. That was 1988. All the teachers were excited to have me learn Japanese. I was in a three-generational farm family way up in the mountains. It took an hour and a half to get to school by bike, bus, and train. I came out of that year writing and reading at a middle-school level. That jump-started me for college. I went to Pomona College down in the Los Angeles area, lived in the international dorm, was an Asian Studies major focused on Japanese history and literature. I spent another year  at Doshisha University in Kyoto, lived with another family for a year. That immersion was awesome for my language skills. When I finished up after those two years and three years of college at Pomona, I applied for JET (the Japan Exchange and Teaching Programme) as a coordinator for international relations. Kobe City was looking for someone from Seattle who spoke an additional language. I fit (their criteria) so I got the assignment.

Tell us about your time in Kobe.

My time in Kobe, 1993-1996, was a wonderful experience. Kobe has a diverse array of sister cities and sister ports, and I was supporting those relationships, liaising with the foreign consular corps there and helping with delegations. That job is most like the job I have now.

When the Kobe Earthquake hit in January 1995, the Swiss rescue team brought in rubble-sniffing dogs, and I was deployed to work with them for a week right after the earthquake doing disaster recovery work, interpreting between the Swiss dog handlers and the Japanese fire department and Self-Defense Forces. We were digging people out of rubble and dealing with on-the-ground disaster response. After that experience, I have always been very passionate about earthquake preparedness.

I extended my contract after the earthquake because I wanted to see things get better. I was interpreting for groups coming over from Seattle and other places dealing with the aftermath of the quake.

You furthered your connections to Kobe once back in Seattle too.

Yes, I came back and got involved with the Seattle-Kobe Sister City Association right away, became chair that next year (1998), and had an 18-year-stint (laughs) of being chair. Too long! Seattle and Kobe were the first sister-city relationship for both sides.

The sister city program was started by President Eisenhower in 1956. At many levels,  Seattle Mayor Gordon Clinton, Washington State Governor Al Rosellini, Seattle Public Schools … there was a lot of leadership across the state that said we want to be involved in that. And 1957 was when Seattle paired with Kobe. We’re one of the first after Eisenhower made his sister-city proclamation. At the heart, it’s that grassroots people-to-people exchange. We need to be connected to people around the world, and that is how we will have a peaceful world. I’ve always been very excited about that concept.

For our 60th Sister City anniversary in 2017, I made a flyer to highlight all the strong relationships that we have. The YMCAs have been exchanging for over 50 years; we have a Seattle Yacht Club, Suma Yacht Club exchange. Rotary Clubs, Soroptomists, and Seafair have all done exchanges. We have a lot of symbols of our Kobe ties all around Seattle.

When I started this job at the Port of Seattle in December 2016, right as we were about to embark on our 60th Sister City and 50th Sister Port anniversaries with Kobe, it was very, very good timing. I was able to help facilitate delegations going back and forth. It’s been powerful for me to keep nurturing that relationship. I consider Kobe a second home. I had such a transformative time there. I was young, right out of college, working for the first time.

One gratifying experience from my relationship with Kobe comes to mind. In 2002, I was interpreting for Mayor Greg Nickels in Kobe for one of our sister city anniversaries. It was our 45th anniversary. We were touring a Disaster Preparedness Museum that talks about the whole earthquake experience. Then we went to a local school. We saw the students have a fire-response drill and talked with them. Mayor Nickels was really struck by people talking about the fire stations and police stations that collapsed during the quake. He came home and asked about the status of all our fire stations. He said, We can’t have our fire stations collapsing in a big earthquake. We need them as command centers. That was the impetus for the very large fire levy that was passed and led to the restoring, rehabilitating or building of fire stations all over the city of Seattle.