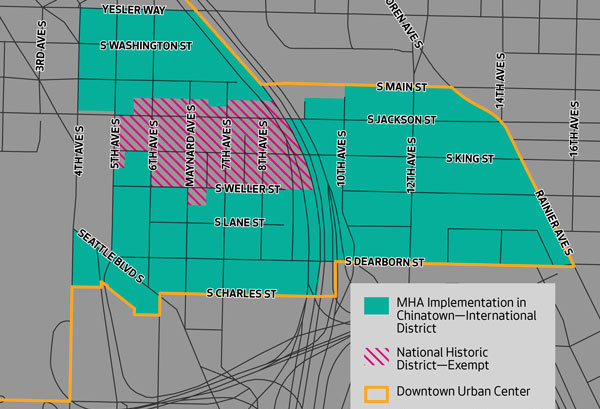 Seattle is changing before our eyes. Upzones are being approved by the city council; people are pouring into the city to grab jobs at Amazon and elsewhere; rents are skyrocketing; and the homeless epidemic is reaching crisis proportions. How will the Chinatown-International District change once upzoning is approved? It’s important that those of us who care about this community hold the mayor to his word that affordable housing will be a vital part of the package. Too often, developers are allowed to pay their way out, leaving lower-income families pushed farther and farther from the city center.
Development is happening at such a rapid clip, it’s easy to feel that we don’t really have a say in how our neighborhoods change. That’s not true. Or at least, it won’t be true if we make our voices heard early and often. What makes the ID great, in my mind, is the mix of cultures and income levels. It’s a vibrant, multicultural part of Seattle and it needs to stay that way. It would be a shame to see it go the way of other neighborhoods, with fine dining and shopping options but culture that runs an inch deep.

Seattle’s ID, perhaps more than any other community, is the way it is because of the community leaders. Why is there no McDonald’s? Activists protested when the company tried to move in. Some of the city’s best shops and museums grace these streets because of the hard work, fundraising, and rabble-rousing of this community. As Seattle morphs into its newest iteration, let’s make sure that the Chinatown-International District doesn’t lose its soul.