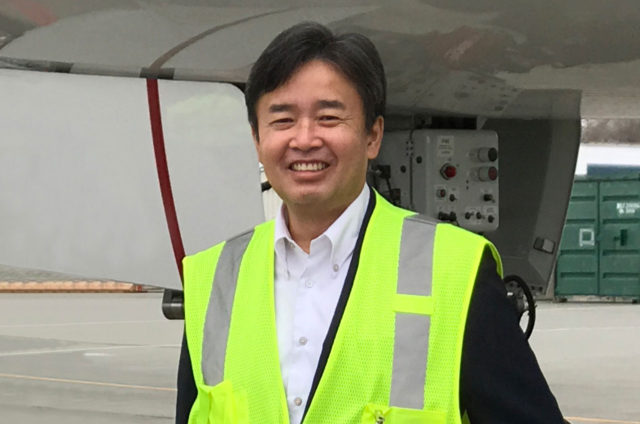 Kosei Yamada Born in Tokyo, Yamada entered Japan Airlines in 1987. He became the chief of the Seattle branch in November 2018 and arrived in Seattle to open the airline’s airport office.

My father was a diplomat, so our family moved all over the world during my childhood. I was born in India and grew up in Switzerland. I spoke French back then, but unfortunately, I don’t remember any of it now. After that, I lived in New York and Hong Kong, constantly changing schools. I understood the difficulty of starting over in a new place, as well as the joys of overcoming the difficulties and discovering new experiences and cuisines in different countries. I joined JAL for a very simple reason: I wanted to be in a company where I could visit all sorts of places.

At JAL, I first worked to assist international passengers at Itami Airport in Osaka. Once I had learned the basics of customer service, I moved to the domestic reservation center in the Tokyo branch. After the economic bubble burst in the 1990s, I was transferred to the public relations department. I spent my days communicating with newspaper reporters. My next assignment was in the International Affairs Department. Today, JAL is part of a 13-carrier alliance called One World, but back then my job was to research the merits and demerits of joining such an alliance.  After that, I worked at different branches including the one in Los Angeles. I also worked in the Headquarters Planning Department at some point.

I came to Seattle last November. I was responsible as the Seattle branch chief for opening the airport office. Eight of us were transferred here from Japan. Today, we have a great team of 17 staff members. We worked toward restoring the Seattle-Narita flights, facing the challenges of beginning from zero with our business – applying for a business license, forging relationships with other businesses. I also experienced small obstacles in starting a new life here – Where is a good barber? How do I buy a car? – and I enjoyed the dynamism of it all.

Just after I moved to Seattle, there was a US government shutdown that lasted for more than a month at the end of last year. Then there was the big snow of February. We put together an aggressive schedule with a little margin and were able to find a sunny day on March 31 when we resumed service. One of the attractive points of Seattle is how kind the people are. The hurdles for setting up our branch were lower than I had imagined. On the other hand, there were difficult gaps between the way Japanese and Americans do business that we suffered through such as people acting like everything was fine but not getting the work done or deliveries that contained the wrong items. However, it is important to embrace diversity working in the US.  I wanted to form an organization and be a human being who always respects diversity to its core.  To form an organization in Seattle, I try to remember that people have all sorts of ways of thinking and different styles to approach getting things done.

In one-on-one negotiations, we tend to advance a conversation from the basis of trying to turn things to our advantage and turn a profit for our company. However, this mindset won’t advance anything when you try to achieve collaborative projects with many different companies. I think Japanese people tend to rely too much on individual effort or qualities. Americans are good at organizational structures and getting a workplace to function well. To succeed in the world, you need alliances. That’s the sort of collaborative goal we should shoot for. From there, my path is to find the strength to trudge uphill, the cooperation to remove obstacles, and the ability to summarize all viewpoints. That’s the process I want to learn.

The Boeing 787-8 that flies between Seattle and Narita has 30 business class seats and 156 economy class seats. Our economy class is getting international praise. The usual 787 economy class has nine seats in one row. In the JAL planes, there are only eight seats in a row. There is more leg space and more area to be comfortable in. In business class, each seat can be turned into a full flat seat. People can sleep comfortably on exclusively developed Air Weave mattresses. The in-flight meals are known as “The Most Luxurious Restaurant in the Sky,” especially with the flights out of Tokyo, where famous Japanese chefs collaborate with us to use the very best ingredients in preparing meals. JAL has strong alliances with Alaska Airlines and a wide network covering all of the US, which makes domestic travel in the US convenient for our customers. Miles can be earned on partner airlines.

I have a unique personal connection to Seattle. My dad worked in the consulate as a diplomat in the 1950s. My mom came here as an exchange student on the Hikawamaru, which is on display in the Port of Yokohama today. They met and got married in Seattle. I think their honeymoon was in Yellowstone. When I got this assignment, my mom was close to death, but my parents told me to give it my all and sent me on my way. I felt a fatefulness with this unusual set of circumstances.

I have two missions I’ve imposed on myself as the Seattle branch chief. One is to make sure that more Japanese people feel familiar with Seattle. The other is to get more Americans interested in visiting Japan. The number of international visitors to Japan is rising rapidly, but there is plenty of room for growth in numbers of American travelers to Japan. Seattle is the next closest after Hawaii. I want more Japanese businesses to consider this beautiful city, so I will work to make sure the information is getting out there. Thankfully, ticket sales have been strong. I hope you’ll fly JAL when you are planning to visit Japan.