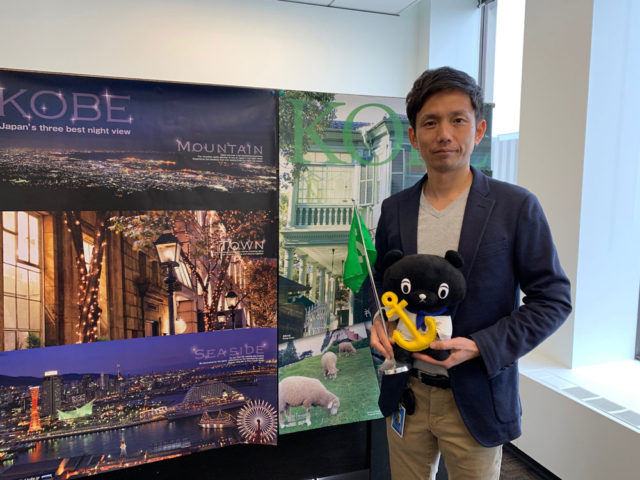 Masanori Nagamine Nagamine was born and raised in Hyogo Prefecture. He came to Seattle in May 2018. He loves tennis and plays often with his wife. He even bought a machine recently that restrings his rackets. He is so excited to play tennis in the sunshine during the summer in Seattle.

The Great Hanshin Awaji Earthquake occurred during my college years and my family home was damaged. That time, I had strong feelings of regret that I was not able to help the city in its rebuilding efforts. After graduating, I once worked in the private sector for two years. However, the feeling I had since the earthquake that I wanted to contribute to Kobe in some way pushed me to change my job. I began working for Kobe City Hall in 2000.

My first job was to plan and manage events within Kobe City. I was involved in a project starting up one of the large events in Kobe today called “Infiorata Kobe Kitanozaka.” I also managed regional Bon Odori festivals. After that, I took many positions in the City Hall including personnel manager for the Environment Bureau and accountant for the department that managed the Port of Kobe. I also worked at the child-care department to privatize child-care facilities.

Just before moving to Seattle, I spent about five years working on a project attracting medical-related companies in the city creating an industrial cluster on Kobe Port Island. The project was called “medical industry-city concept” and that has been part of Kobe’s post-earthquake rebuilding effort.  Kobe received huge support from all over the country after the earthquake. The project started as a way to give back to the world by creating an industrial cluster of high-level medical technology that would save human lives. Dr. Tasuku Honjo, who won a Nobel Prize in physiology and medicine, is one of the supporters of this project.

I was appointed to the Kobe-Seattle Business Office (the Seattle department inside Kobe City Hall) in spring 2018. I am the only representative from Kobe and I run the office with a local hire. Our mission is to do research and develop networks in order to turn Kobe into a city with a lot of IT startups such as Seattle and Silicon Valley. Three years ago, Kobe and a well-known venture capital company in Silicon Valley, 500 Startups, collaborated for the first time on an IT business support program. Now I spend about a quarter of my time in the San Francisco Bay area. I spend every day meeting with startup businesses, both American ones and Japanese ones.

For Kobe City to become like Seattle or Silicon Valley, we need the human resources that can develop high level technology. In Japan. Programming will become a mandatory part of the curriculum in public elementary schools beginning in 2020, but the teachers need to be familiar with the subject. We started a project to get startup businesses to hold study sessions with the teachers. I believe that it is important to keep Kobe unique so that the city attracts good human resources.

I live in Issaquah with my wife, a sixth-grade daughter, and a third-grade son. My son got in a big trouble on the first day of school. He fell asleep on the school bus and missed his stop. Somehow, he made it back to school by himself and we were able to pick him up at school. My wife and I were very worried. We got him a smartphone because of it. When I see my children’s homework, I find that rather than memorizing things, students are supposed to explain how they think and why they think certain things happen. This education with a focus on output made an impression on me. This education system in Seattle must be helping to raise talented engineers and successful entrepreneurs.

I am so grateful to my wife for supporting our family while I go on many business trips. I enjoy playing tennis with her. We are a team and compete in a league. Our family always talks about how we want to go see the US Open. I like beer and recently bought a uKeg. I highly recommend it for anyone who likes beer. Seattle is a great place to try all the local beers.