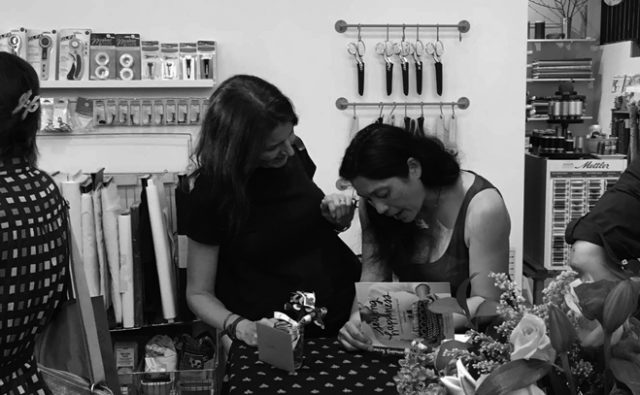 “I’d like to think that this isn’t your typical sewing book,” says Nikkei author Sanae Ishida in her latest book, Sewing Happiness: A Year of Simple Projects for Living Well. The book chronicles her path from exhaustion and illness resulting from overwork to a “real, joyful, unpolished, but meaningful” life.

For fans of Ishida’s children’s book Little Kunoichi, this second book may come as a bit of a surprise; it’s part memoir, part “lookbook” for sewing inspiration, and part instruction manual. Much like Ishida’s own sewing blog, this book is a hybrid that somehow creates an inspiring path to happiness and health through acts of creativity and an “entreaty for gentler, less perfection-oriented ideals in life.”

Sewing Happiness is divided into two sections. The first, which the author refers to as a “lookbook,” is arranged by the seasons; each season features a personal essay accompanied by pictures of sewing projects chosen by Ishida. The essays tackle some difficult issues—overwork, job loss, autoimmune disease, body image, cultural identity—but they provide context that is helpful, not weighty. (Readers of Little Kunoichi may recognize Ishida’s emphasis on persistence rather than perfection.)

The second section is a sewing manual with instructions for the projects, which are all “beginner-friendly.” Although some basic sewing experience is required, both by hand and by machine, the use of printed patterns is not. Ishida provides a few templates that can be photocopied; she also asks the reader to use clothes they already have in order to draft patterns for new clothes. Each project is beautifully styled and photographed, and Ishida’s writing is charming.

“I wish I could take credit for this ingeniously designed triangular bag,” she confesses in the description for a tote bag based on the classic Japanese bento bag, “but it’s been around for generations in Japan.” Elsewhere, she tells the reader: “Mistakes are part and parcel of the process, and the seam ripper will become your best friend.” (My own version of the tote bag involved many mistakes and ripped seams, but I kept Ishida’s mantra firmly in my head—and am very proud of the result.)

One of the most valuable aspects of the book is the inspiration it provides. The elegant and deceptively simple photographs alone have inspired new and renewed sewing habits in my two young daughters—scraps of thread and fabric are now scattered around our living room. Even more meaningful to me, however, is Ishida’s passionate belief in simple habits and creativity. “There’s an overarching terror about creating something that didn’t exist before and putting it out into the world for judgment,” she muses, “but when you do it repeatedly… the confidence muscle strengthens… [What] I hadn’t expected was how health-boosting it was to simply make time to create.”

Just after the book’s Seattle launch party, which was also a “make and take” crafting event, Ishida answered a few questions about the book for Discover Nikkei.

Tamiko Nimura (TN): There are a few connections to Japanese culture in these sewing projects—a tote bag and pillow case based on origami principles, an introduction to sashiko stitching—which may appeal to Discover Nikkei readers. How do you think this book reflects your Japanese American roots or cultural connections?

Sanae Ishida (SI): I deliberately incorporated many Japanese elements, including sashiko stitching, origami, the bento bag, textiles traditionally used in Japanese sewing (linen, cotton, and double-gauze), and even the book’s neutral and indigo color scheme. I’m an avid fan of Japanese sewing books with their gorgeous photography, clean aesthetic, and simple yet appealing projects, and I aspired to create a book that evoked a similar look and feel, but with my own twist.

Mostly, though, I grew up with one foot solidly in American culture and the other foot squarely in Japanese culture, so my hope was to represent this blended upbringing of mine. Japanese was my first language and I still speak it with my parents, but now I dream exclusively in English and am married to a guy from the Midwest who didn’t know what sushi was until he was in college. I’ve lived in Japan and know that I don’t understand much of the subtle cultural mores there, but here in the U.S. I feel more Japanese than American. It’s funny that way—the nature of my feelings of “otherness” depend on where I am. I hoped to have a more inclusive feel with the book, a hybrid of sorts, just like my daughter is a genetic hybrid.

TN: You mentioned in conversation that an alternate title for Sewing Happiness involved the term wabi-sabi. Can you say more about your reasons for wanting that in the title?

SI: I would say that wabi-sabi is the underlying theme of the entire book. I’m a recovering perfectionist, and as a kid I had a hard time saying “I don’t know.” I hated to admit that I didn’t possess all the necessary knowledge. I worked and studied extra hours so that I could ace all my tests, get perfect grades, and have the right answers at the ready when or if the teacher called on me. I carried that mentality well into adulthood, and it affected every area of my life from my appearance to my relationships to my work performance. I viewed flaws and mistakes as unforgivable and was very, very hard on myself.

When the unthinkable (for me) happened and I was fired, I found myself reevaluating everything, particularly this workaholic/perfectionist/overachiever mindset that I thought was so normal and admirable. Then I picked up sewing again and I started to really see the value of the imperfect and wonky and unpolished.

I love that wholly Japanese concept of embracing the beauty of the ephemeral and imperfect. I think it’s a lovely and much healthier way to engage with the world, so I wanted the book to be titled Wabi-Sabi Stitches. Sadly, the publisher said that hardly anyone would know what that was and nixed it. Oh well. I like Sewing Happiness just fine!

TN: How did the idea of Sewing Happiness come about? Were there other books—memoirs, sewing manuals, or both—that inspired you?

SI: In 2014, I was in the middle of working on Little Kunoichi when the new acquisitions editor for the nonfiction division of Sasquatch Books contacted me to ask if I had any ideas for a book (I have a different editor for the children’s book). I presented about 10 ideas, and she was most interested in a sewing/craft book.

I mentioned that I loved Molly Wizenberg’s A Homemade Life: Stories and Recipes from My Kitchen Table. I had discovered Molly’s blog Orangette back in 2005 and had been immediately smitten by her writing and her charming photos. When her first book came out, I remember thinking, “Oh, I wish I could write like that!” I knew that I could never create a cookbook since I’m not all that comfortable in the kitchen, but Molly’s book has always been the gold standard for me in terms of how a book could make you feel after reading it. So I pitched a similar concept, only with sewing instead of cooking. Many months later, it was a surreal dream-come-true on multiple levels when Molly reviewed a galley copy of Sewing Happiness and provided a wonderful blurb.

TN: What was the process of writing the book like, compared to writing Little Kunoichi, your children’s book? What kinds of new writing muscles did you have to flex to write this memoir/instruction manual?

SI: With Little Kunoichi, I started with the imagery. I saw the whole story in my brain like a movie reel and sketched everything out first. Then I added the words and tweaked the images and text so they would fit into a 32-page thumbnail storyboard, which I then pitched to the editorial acquisitions team for Sasquatch’s children’s book imprint, Little Bigfoot. I was lucky—very little of Little Kunoichi changed between that initial rough concept and the final manuscript. Once I signed the contract, I didn’t do a whole lot with the text and focused more on completing the illustrations.

Sewing Happiness felt more like writing an extended blog post. I had already touched on many of the topics in the book on my blog. I wanted to avoid simply repurposing blog content though, so I went to town and added a lot of new information. There was a lot more leeway in terms of word count for Sewing Happiness compared to Little Kunoichi, so my first draft was twice as long as the final book! My second draft was a lot leaner.

Writing it was fun, although parts of the book are very personal and embarrassing.

The production of Sewing Happiness was 50 times more involved, because it was about more than just writing and illustrating. Once my proposal outline was approved, I created the book in this rough order: cover, essays, pattern development and testing, sample sewing and photography, and illustrations (decorative and instructional). I was a one-woman show for the most part, though I quickly realized that my photography skills weren’t up to snuff. My friends Rachel, Allie, and George helped me with styling and photography, though I styled and shot about a third of the final photos myself. It was my first time art directing, and I discovered that I love it.

TN: Is there anything that didn’t make it into the book that you wish you had been able to incorporate?

SI: About 20 projects didn’t make the cut. At first, I meant to focus mostly on garment-making, since that’s my favorite kind of sewing. However, not only are my pattern-drafting skills for clothes rudimentary at best (I sew mostly from Japanese sewing books and indie patterns), the inclusion of more apparel would have meant far more complicated instructions and illustrations, and I had page count constraints. The trickiest part of the book was creating projects that both fit with the essays and represented the actual kinds of sewing I did during that year, while remaining beginner-friendly. I am proud of and happy with the final projects!

* Sewing Happiness was published in April 2016 by Sasquatch Books, and is available at bookstores or online.

[Editor’s Note]
The article was originally published in Discover Nikkei at www.discovernikkei.org managed by the Japanese American National Museum. Tamiko Nimura is a Sansei/Pinay writer originally from Northern California and now living in the Pacific Northwest. She blogs at Kikugirl.net.

Interview with Ryoko Iwata, author of “I Love Coffee”