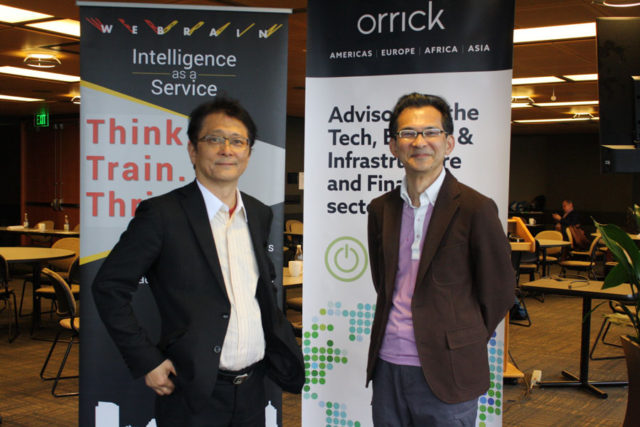 Innovation Finders Capital (IFC) has held AI Innovation Meetups every quarter in Seattle since 2016. It is officially supported by the Washington State Department of Commerce. Local startups attend looking to make advances in Japan. The Japanese participants, on the other hand, are large companies looking for innovations. Past participants from Japan includes big names such as Fujitsu, NEC, NTT Data, Mitsubishi, First Retailing (makers of Uniqlo brand goods), and ISD-Dentsu. The North American Post sat down with CEO Tetsuro Eto and Co-founder Tom Sato after the 12th meetup session in April. Excerpts from the interview follow.

“Japanese corporations can’t rely on the old myths about growth through Japanese-style manufacturing; a turn toward Open Innovation is necessary,” says IFC CEO Tetsuro Eto. “Companies that have begun to steer in a new direction are looking at Seattle, with its concentrations of startups innovating with AI and IoT technologies.” Eto works to garner interest on the Japan side from his base in Tokyo. Up until now, Japanese corporations would grow by accumulating technology internally. But with the recent technological revolution emphasizing speed, Eto explains that the necessity to look outside for technical collaborations, something known as Open Innovation, has been rising.

Why Seattle? “There are a lot of startups in Seattle that want to do business with Japan,” Eto says. One of the characteristics of the Seattle startup scene is that there are a lot of companies focused on B2B (business to business) with large corporations such as Microsoft, Boeing, and Amazon. This is a big difference with the Silicon Valley, where startups are more focused on business to consumers. “They avoid sales channels dominated by large corporations, like in Japan, and Seattle startups are very aware of this fact. They want to sell their technology into that channel.”

IFC Co-founder Tom Sato explains: “Cloud hosting services such as Microsoft’s Azure and Amazon’s AWS are rapidly growing in Seattle. That is the essential infrastructure for the coming AI technological revolution.” Sato is based in Kirkland and in charge of finding the right Seattle startups to pair with Japan. AI technology needs a reliable high-speed network for development and to deliver services. “Seattle, which has a strong presence in cloud computing, will be at the center of the AI technological revolution over the next 30 years.”

The AI Innovation Meetup gathers at meeting rooms in Seattle’s Columbia Tower. “Rather than holding a large convention, it is more effective to host this kind of business meeting opportunity,” Sato says. “Every time we hold these meetups, we have around 200 private meetings where businesses are matched. Seattle startups can have several meetings with Japanese large corporations without traveling to Japan. They get to meet with people who are interested in shopping for technology. Many Seattle startups gather here every time.”  Each time, the meetup starts with a presentation session where the Japanese side explains their innovation needs called “shop list”, and the startups present the technology and services they can deliver. Then meetings are set up as IFC matches up the Japan side and Seattle side.  In three years of these quarterly meetups, there have been a lot of deals made.  Six past Seattle attendees have started their business in Japan including three that have already opened branch offices in Japan. Two Japanese corporations opened their North American offices in Seattle in 2019.

IT Industry, Careers Start in 1980s

Eto and Sato were original Microsoft Japan members when it opened in 1986. Their long careers in IT, their extensive personal networks, and their know-how make it no surprise that Sato and Eto are the ones behind the AI meetups. “It was the time when Bill Gates was still working like mad,” Eto recalls. “He would join us as we visited many Japanese clients to sell our products.”

Eto recalls first hearing about Bill Gates. “When I was in college, there was an interview with him in a magazine. I remember being shocked and thinking, ‘This is quite a guy!’ When I was looking for a job, I only focused on two companies: ASCII, which was a Japanese publishing agent for Microsoft products, and Softbank, which was distributor of the products. I chose ASCII because I was able to directly meet with the president during the hiring process.”

The mid-1980s was the peak of the Japanese Bubble Economy, and students would get as many job offers as they wanted. Popular industries were something like financial, constructions and general trading — but certainly not IT.  Eto thought at the time, “I want to do something different from everyone else.” Two years into his career at ASCII, his boss, Susumu Furukawa, became the first CEO of Microsoft Japan. Eto also made the move to Microsoft Japan, where he oversaw sales, marketing, and public relations for Windows 1.0 and the first generation of Windows products. Eto left Microsoft in 1991 and spent 25 years working for Dentsu, where he was involved in large projects including starting up an Internet ad agency, Cyber Communications, as a joint venture between Softbank and Dentsu, and supervising the IT infrastructure integration process after the acquisition of the large English ad agency Aegis.

Sato grew up in London from the age of 14. After graduating from college, he went to work in Microsoft’s London office. He was the person in charge of the West European markets for MSX, which Microsoft and ASCII jointly developed in the early 1980’s. “I am of the Apollo generation,” Sato says. “I watched the film of men landing on the moon, and I was fascinated by the computer in the film.” He majored in astronomy and physics in college and taught himself programming. Around the time when he graduated from the university, he had developed and marketed his own 8-bit video game for the PC. Those were the days before Nintendo Family Computer or Sony PlayStation, and, of course, before online gaming. Instead, he would make a game cartridge that was sold at stores. “That experience taught me about the process of developing a program and commercializing it. After graduating, I wanted to get into the computer sector, so I went looking for an internship and knocked on a lot of doors. During this process, I met Bill Gates, who was talking about establishing a global de facto standard for the computer industry. I remember thinking that I want to do that with him.” When he received a call from the Microsoft Japan team in Tokyo, he made the move and became the product manager for the Japanese versions of Windows 2.0 and 3.0. “Tokyo in the early Bubble days was really fun. I wrapped up my work in London quickly and moved to Tokyo,” Sato recalls. After working for Microsoft Japan for years, he moved to Silicon Valley in the second half of the 1990s to be amid the dot com bubble. He started a company that runs conferences and continued consulting with startups on their financing and long-term strategies.

Four years ago, Eto and Sato visited Seattle for the first time in a long while. “The rapid growth of the cloud sector and the quickly increasing number of AI ventures made my skin tingle,” Sato says. “Seattle is more affordable than Silicon Valley and advantageous for starting a business. The human resources are abundant, too. I thought, I want to do something here.” That was his motive for founding IFC. Eto also was interested in doing something in Seattle. “I always felt that I wanted to work again in Seattle, the city that raised me and gave me a chance,” Eto says. He has been lecturing about Seattle’s growth and attractions in different cities in Japan; he even refers to himself as “a salesman selling Seattle to Japan.” He participated with Washington Governor Jay Inslee in the 2015 Washington trade mission to Tokyo too.

“Twenty years ago, Windows OS was born, the family PC was starting to become popular, and use of the Internet was spreading,” Eto recalls. “Perhaps an even bigger historical wave is coming now with the AI technology. My work today is to make sure some of that Seattle innovation coming out of this wave gets exported to Japan. In some ways, it is like my earlier work.” Eto also emphasizes the importance of his current efforts to forge technological partnerships between Japan and the US. “Japan’s presence in the post-Cold War global market has been decreasing as EU became one market and new markets such as China and India are rising. But many of its corporations are still strong. When they are going to take the next step for future success, I believe their natural partner is the US.”  Japan and the US are both societies based in democracy with shared rules and values. They are allies that have developed a trusting relationship. “AI is going to exert a lot of influence on society and affect a lot of sectors. There are predictions that by 2045, AI will surpass the intelligence of humans, a step known as singularity. There’s a good chance that totalitarian countries and organizations may manipulate the technology in a dangerous way. It’s important countries like the US and Japan make the rules going forward.”

Both Sato and Eto say this is the most interesting phase of their careers. “If I work at a large company, I can probably stay at the leading position only until 60,” Eto says. “Actually, I had my first child when I entered my 50s, which was a private turning point. I was ready for a new challenge for my child too.” Sato was also up for the challenge. “I want to have IFC start getting involved in the investment business and become a venture capitalist for startups,” he says by way of explaining his motivation for establishing IFC. “Any sort of person can be active in the innovation sector. I didn’t really excel at programming, but I’ve come all this way in my career. I hope that more and more Japanese young people enthusiastically get involved in the AI sector.” Sato and Eto still have a lot of work to do bringing Japan and Seattle closer together during this wave of AI innovation.

Tetsuro Eto (right) – Graduated from Faculty of Business and Commerce, Keio University in 1984, Eto entered ASCII, then joined Microsoft Japan when that company was founded. After he left Microsoft in 1991, he worked at Dentsu (large Japanese ad agency) for 25 years managing the company’s IT strategy. In 2015, he started his present job.
Tom Sato (left) – After graduating from London University, he entered Microsoft UK. In 1986, Sato moved to Microsoft Japan and worked as the product manager for the first generation of Windows products. In 1996, he left the company to form a consulting business in Silicon Valley for startups. He began his current job in 2015.