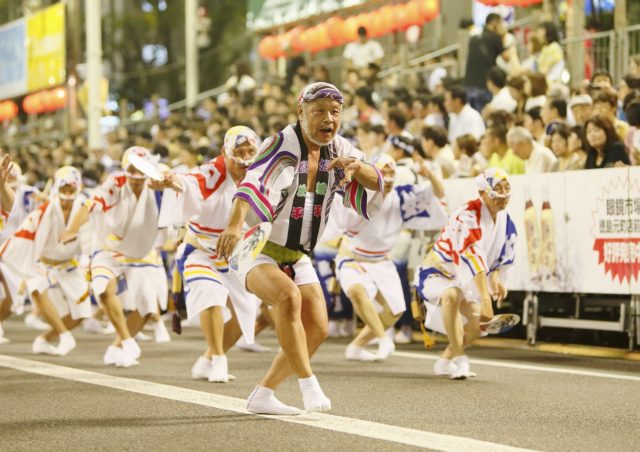 The Gojyahei ren, or Awa Odori dance team, was formed in 1946. Hideaki Oka, the seventh-generation ren leader of the historic team that has danced the Awa Odori at the Expo 70 in Osaka in 1970 and the 80th birthday celebration for Emperor Akihito in 2014, will deliver a dance lesson at Japan Fair on June 29th. The following day, an Awa Odori dance contest will be held. Looking forward to this big weekend of events, we talked to Mr. Oka about the activities of Gojyahei and the deep meaning behind the Awa Odori.

Dancing for more than 60 years with Gojyahei

Gojyahei was formed in 1946 under the name the All Maekawa Gojyahei Club. While the remains of World War II were still around them, the group formed because “sometimes you need to shed your worries and dance.” They took their name from the Tokushima Prefecture slang word “gojya,” which means translates to “nonsensical person.”  There were 28 people in the original group. It was all men back then. Now, some 70 years later, the ren has grown to 385 people, consisting of both men and women, children as young as 5 and elders in their 80s.

“I knew from the beginning that if I was joining a ren, it would be Gojyahei,” Oka said. After twenty years, he became the ren leader, and he is still an active dancer today. He practices five days a week for the big summer performance of the Awa Odori in Tokushima Prefecture, and also frequents a gym to make sure he stays in tip-top shape. He is completely dedicated to Awa Odori.

Oka has spent the majority of his life connected to the Awa Odori. Of all the experiences Oka has had, dancing for the emperor made the biggest impression on him. He danced for Emperor Showa and Heisei twice each, at events including Expo 70 and the emperor’s 80th birthday. His dance has been highly praised, including a commendation from Tokushima Prefecture in 2013. He is a legend in the world of Awa Odori. His next big goal is “to dance with a huge number of people during the opening ceremonies of the 2020 Tokyo Olympics.”

The fun of Awa Odori is in taking part

You drop your waist low as if going into a crouch and move at a slow tempo, sliding forward as if in a Noh play. That’s the special way the Gojyahei type of dance proceeds. It is one of the main Awa Odori styles. In 1981, Oka became quite famous after naming a dance for men, Amiuchi, for the way a fisherman reels in the net. Gojyahei has performed all over Japan as well as in Europe, the rest of Asia and South America.

Gojyahei has helped spread the charm of the Awa Odori all over the world. “The feeling in Japan or overseas is the same,” Oka said. “We perform because we want as many people as possible to come to Tokushima to see the real Awa Odori.” Tokushima is last among Japan’s prefectures when it comes to attracting tourists. Oka dances with the energy of someone who wants to use the Awa Odori as a way to celebrate his home prefecture. Famous actor Masahiko Tsugawa, who died last year, was someone who became fascinated with the Gojyahei dances. “Instead of watching the Awa Odori, it’s better to join in. It’s a participatory folk song after all.” Oka said he will never forget this word from Tsugawa. This year’s Japan Fair is also a participatory festival. Don’t miss the chance to learn about the Awa Odori at Oka’s lecture on the 29th. And then watch the dance contest on the 30th, or even better — join in! You’ll soon realize why the Awa Odori is such a sensation in Japan.

What is Awa Odori ?

Tokushima’s Awa Odori is the most famous of many dance festivals held across Japan in summer. “Awa” is the former name for Tokushima Prefecture while “Odori” means “dance.”

Spectators and dancers come to Tokushima by the thousands to see Awa Odori, whose origins date back hundreds of years. Awa Odori is called “Fool’s Dance.” That comes from the lyrics to a common dance song, which translates as follows: “Fools dance and fools watch, if both are fools, you might as well dance (踊る阿呆に見る阿呆、同じ阿呆なら踊らにゃ 損そん)“.

Don’t be a fool by just watching. Dance !
Sign Up for the Dance Contest. Win 10 Mariners’ Suite Tickets! Organize your dance team “ren,” and register to dance at the contest. Show off your original dance moves and outfits. Each team will be judged by Oka, and the best ren will win 10 Mariners’ Suite Tickets.
Sign up: japanfairus.org/page/awa-odori

Hideaki Oka is the seventh Gojyahei Leader. He joined the ren in 1960 and became the leader in 1980. He has danced the Awa Odori in all 47 prefectures and about 20 countries.