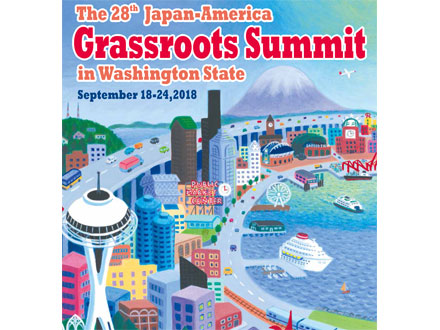 Are you interested in helping show our warm hospitality to visitors from Japan? Looking for a chance to practice your Japanese language skills, show off your city, and get involved in your local Japanese community? The Japan-America Society of the State of Washington, the host organization, is actively seeking volunteers to help greet or see-off Japanese guests at Sea-Tac International Airport, welcome them to their Seattle hotel, and assist with walking tours around downtown Seattle.

To sign up as a volunteer, and for more information about the upcoming Grassroots Summit, visit https://jassw.info/Grassroots2018.

“We live in a state that is highly dependent on international trade and international tourists, so cultivating relationships with other countries like Japan is critical to our state’s economic success,” explained Grassroots Summit Committee Co-Chair Tay Yoshitani. “Though these ‘home stays’ are relatively brief, many of these experiences will grow into lasting life-long friendships. Woven together, these experiences strengthen the fabric of a strong and mutually beneficial relationship between Washington state and Japan.”

The Summit alternates between the United States and Japan and will be in Seattle this year for the first time in its 28-year history. This year, it is hosted by the Japan-America Society of the State of Washington in association with the Consulate General of Japan in Seattle, city governments, sister city associations, and Japanese community organizations and leaders.

About Japan America Grassroots Summit
The Japan-America Grassroots Summit was founded in 1991 by the John Manjiro-Whitfield Commemorative Center for International Exchange to honor the friendship between John Manjiro Nakahara of Japan and Captain William Whitfield of the United States. It was pivotal in opening Japan after isolation and developing the early United States-Japan relationship. In honor of Captain Whitfield opening his home to John Manjiro, the Summit offers a unique three-night homestay experience for guests.

About The John Manjiro-Whitfield Commemorative Center for International Exchange: http://www.manjiro.or.jp/e/
The CIE was founded in 1990. It held the first Grassroots Summit in Kyoto, Japan in 1991 to commemorate the relationship between John Manjiro Nakahara and Captain William Whitfield. The CIE and Grassroots Summit’s aim is to promote “Grassroots Exchange,” i.e. the free exchange of opinions between individual citizens of America and Japan, and through this to further mutual understanding and friendship between the two countries.

About The Japan America Society of the State of Washington: http://jassw.org
JASSW was founded on July 24, 1923 by leaders from Seattle’s business, academic, and diplomatic communities with the mission of promoting mutual understanding and friendship between the peoples of Japan and Washington State by providing a forum for the exchange of ideas and information. Today, the Society, one of 38 independent members of the National Association of Japan-America Societies, maintains a diverse membership of Japanese and American corporations and individuals from throughout the state and provides varied programs that build positive U.S.-Japan relations.