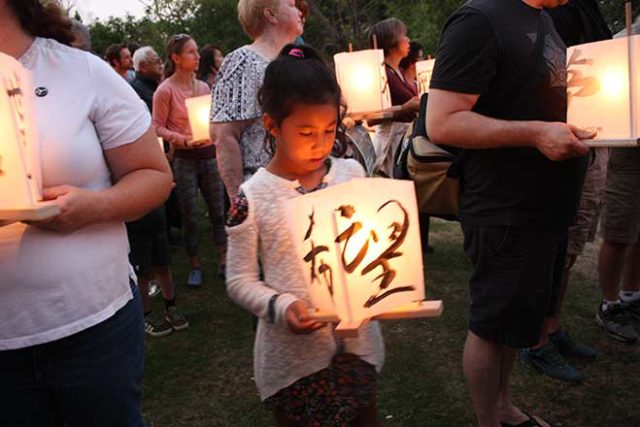 Since 1984, a group of concerned citizens, peace activists and members of the Japanese American community have gathered together on August 6 to mark the atomic bombings of Hiroshima and Nagasaki at the end of World War II and to make connections with other groups looking to spread peace and community. Over the years, the event has grown and evolved, with a massive lantern-floating ceremony on Green Lake as the visual centerpiece of what is typically a moving and invigorating event. Families, neighbors and activists line up to write their calligraphic messages of peace on the sides of the lanterns. This year, the programming included songs by the Marshallese singers, a keynote speech from Buddhist Priest Gilberto Perez and taiko drumming.
Two of the group’s driving forces — President Shirley Shimada and Co-Founder Martha Brice — are in their 80s and are eager to connect with young peace activists and concerned citizens who want to be part of a dynamic and forward-looking group that holds one of the region’s most important peace events each year. The North American Post sat down with board members Shimada, Brice, Fred Miller (secretary) and volunteer and emcee Stan Shikuma to talk about the organization’s history and its hopes for the future. Excerpts follow.

How did this event begin?

Shikuma: It began in 1984 and it was organized in cooperation with the JACL chapter district office and the Washington Physicians for Social Responsibility (WPSR). We got a keynote speaker: Congressman Mike Lowry. He was active in supporting Japanese redress but also was involved in nuclear disarmament issues. At that point in time, Reagan was trying to put cruise missiles into Europe, which would have put everything on a hair-trigger. It would have given the Soviet Union 10 or 15 minutes to decide whether to launch a retaliatory strike. It was a really bad idea that could have led to accidental war. Our event was held at the Blaine Methodist Church up on Beacon Hill. We got nearly 300 primarily Japanese Americans to attend. It was very successful.

After that, there was continued collaboration with JACL and WPSR. A few years later, we started doing the lantern floating. The first time we did that was at Frosh Pond at UW. They only floated like 40 feet! But it was much easier to clean up (everyone laughs).

Brice: There was so much fear in those days. They were the days of the doomsday clock. There was great fear all throughout the culture of nuclear holocaust, particularly among people who had been working for peace and social justice for years. Physicians for Social Responsibility, all being doctors and nurses and researchers like myself, were at the forefront. As chair of the program committee at that time, I was particularly concerned about the nuclear issue, and the Physicians for Social Responsibility was involved in that 1984 Hiroshima Day event.

I had heard that a community in Wisconsin had floated lanterns. I called them up. I thought, what a wonderful thing to do. The floating lanterns part was my idea. I found out how to make the lanterns from those people. They just told me over the phone. I brought the idea to the committee that was planning programs, and we decided to do a lantern-floating ceremony.

From the beginning, I felt very strongly that the event should be not just about the bombings in Hiroshima and Nagasaki, but for prevention of violence at all levels of society. Also, we wanted to make the event multicultural with representatives from different communities.

Shikuma: Martha (Brice) is considered the mother of Hiroshima to Hope.

A couple of the earlier events were held at the University of Washington, right?

Shikuma: Yes, one of the reasons we did it at UW was that it coincided with the Japanese American Citizens League convention, which was being held on the campus in 1988. Everyone in Seattle remembers that as the year that redress (for incarceration of Japanese Americans during World War II) was signed (by President Ronald Reagan). We found out about it during the convention, so a dozen people at the convention booked flights to DC and left. A lot of the leadership wasn’t there for the last day of the convention!

You have integrated other ethnic groups and causes over the years. For example, after 9/11, I believe you reached out to the Muslim community and there were lanterns with messages in Arabic.

Miller: That was not Arabic, it was Punjabi. Shortly after 9/11 some “great hero” decided he was going to do something about terrorists and he shot and killed a Sikh man. At that time, Wing Luke Museum was a major part of the coalition that put this event on. They co-sponsored with the Sikh community a commemorative event in Hing Hay Park. At that event, we loved the message that the Sikh community brought, so we roped them in. They have become wonderful partners of the event ever since.

I have a logistical question: You mentioned there were 1,200 or so lanterns on the lake. How do you clean them all up and how long does it take?

Shimada: We’re always done by midnight. (Everyone laughs). That’s one of the reasons we stop it at 10 o’clock.

Miller: We had a record night two years ago. I am the one who says when we launch the boats and start the retrieval. It was perfect, it was going to be so easy, so I waited and waited until about 10:30. The moment I said, “Let’s go” — within 30 seconds, the wind picked up. The wind had been blowing straight out of the west, so there was this perfect line. All we would have had to do was row out and pick them up. The wind switched from west to due north, and the lanterns scattered everywhere! It was 4am before we had them all.

I’d like to ask about your personal motivations for volunteering to make this event happen each year.

Shikuma: When we started the first one, I was working as part-time staff at the Japanese American Citizens League district office. We had been working on redress and different ways to pull the community together. One of the ideas I came up with was that Hiroshima day was coming up and we should do something to commemorate it. We also had been doing things around peace issues. Besides the cruise missile issue, there was also a war going on in Central America; stuff about apartheid was heating up. So there were all these issues about peace and justice floating around. We decided to do the From Hiroshima to Hope program.

My mom’s side of the family comes from Hiroshima-ken. My mom is kibei, so she lived there before the war and still had friends in the area. She told me that one of her best friends from high school had been traveling on a train on the 7th or the 8th — shortly after the bomb hit but before word had really gotten out. The train just stopped, and the conductor said, “There are no more tracks so people will have to walk from here.” They had a sack of potatoes with them that they were carrying for snacks, and she said she ended up giving them all away because there were people wandering around who hadn’t eaten in several days.

There’s a feeling of peace and justice from the whole incarceration experience. You gotta stand up for what is right, and you gotta fight for what is fair. And then just the whole idea that our country dropped a nuclear bomb on a city. There are two cases of nuclear weapons being used on a population in the history of the world, and that we’re responsible for it is devastating to think about.

People tend to think of it as something that happened long ago, and they might say that it’s terrible and the generals were evil or mean, and I try to tell them that all the guys who flew the planes, served in the military, served in government, they’re all probably pretty decent people, but they made, in that instance this terrible, terrible decision, and they’re not that different from us. It was our democratically elected government that decided to do it, so it’s on all of us.

Shimada: My maternal grandmother’s family lived just south of Hiroshima. Since my grandparents lived with us, when the bomb was dropped in 1945, my grandfather wrote to my grandmother’s nephew who wrote back right away to assure us they were okay.

They were protected by the hills. In 1960 when I visited him and his family, he told me about taking his own wheelbarrow and shovel and going into the devastated city of Hiroshima where he shoveled bodies into the wheelbarrows and brought them to the incineration site for a couple of weeks. Even 15 years later, he said he could still remember the smell.

I had just retired when Fred caught me at a peace demonstration and strong-armed me into joining (laughter).

Miller: In the early 90s, I started working for Peace Action, which had been a nuclear freeze organization in the 80s. I became their program coordinator. My boss sent me to the meetings of Hiroshima to Hope because we should be represented there. I fell in love with the crowd. I can’t quit now.

I am a hardcore atheist. But in the past month, I’ve probably been in 15 to 20 churches bringing posters. Churches are one of the last places in America where you find community. And community is wonderful stuff. I’m connecting with churches in all sorts of ways. Religious stuff is all falderal to me, but it all breaks down when you put lanterns on the water. That one works for me.

Shimada: It works for everybody.

Miller: The event brings everybody together. From Hiroshima to Hope is the biggest thing in the peace movement every year. I’m still trying to figure out how it all came together.

The thing I’m proudest of is the year that the Columbine shooting happened, we had our first meeting not too long after the shooting. Everybody at the table was saying it’s obvious that the theme this year has to be youth violence. I said, No, what our theme has to be is youth peacemaking. Our keynote speakers were four children. The youngest was a second grader who talked about the peacekeeping teams on the playground. She was so articulate, so clear and brimming with hope.

And you’ve said you’re hoping to connect with more young people to bolster the organization into the future.

Shimada: We are going to be restructuring our committee, and we’re looking for more leadership that could carry on. I’m looking for somebody to take over. We’re looking for people who can generate interest in different populations.

Brice: It could be that one of your readers wants to join a group of people who care about these things and are trying to bring attention to them in a local way. If they come to be part of this event, it benefits the whole city.

Shimada: We have nuclear weapons just 20 miles away on Bainbridge. We’re saying, look, maybe we should reduce them. Wouldn’t that be a good thing?

From Hiroshima to Hope www.fromhiroshimatohope.org

The mission of From Hiroshima to Hope is to commemorate the victims of the atomic bombings of Hiroshima and Nagasaki and all victims of war and violence. They educate for peace, non-violent conflict resolution and nuclear disarmament through a public outdoor event on August 6th each year featuring music, speakers, and a lantern-floating ceremony.