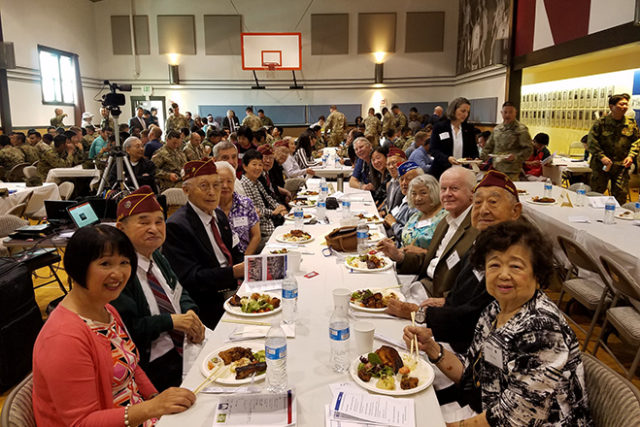 Editor’s Note: This article was originally published in the NVC September 2018 newsletter.

The success of this year’s joint luncheon was in large part due to Sasakawa Peace Foundation, USA that provided funding for the lunch and administrative costs. Japan
US Military Program or JUMP is also a collaborative efforts of Sasakawa Peace Foundation USA, the Embassy of Japan and the National Association of Japan-America Societies. The Japan America Society of Washington’s assistance was greatly appreciated.

The lunch consisted of Japanese dishes and Terry Takeuchi’s favorite lineups. Those active duty personnel were appreciative of the NVC lunch as during their training at the Yakima grounds, they are served MRE, Meals Ready to Eat. After servings of celebratory cakes for dessert, the Joint Luncheon program began.

Going for Honor, Going for Broke DVD was shown to the audience. After the DVD, Nisei veterans in the audience were honored and recognized. They were: Mickey Hiroo, Tosh Tokunaga, Tak Akiyama, Shig Tanagi, Sat Ichikawa, and Kim Muramoto. Shig served in the 7th Division that Major General Burleson is currently commanding.

After recognizing Nisei vets, we were treated with the Okinawa Taiko and the Lion Dance. For the finale, the audience joined in the celebratory Okinawa dance.

We were very grateful for the participation of many community members to honor US and Japanese active duty personnel. For this year’s sixth annual event, VIPs and NVC members helped to share and educate the Japanese American Experience with many people who had no idea about the Japanese incarceration and the 442nd /MIS accomplishments. This event also opened up acknowledgment and contribution of Japanese American patriots who served in the military since World War II. When today’s Army personnel and the NVC veterans speak, the conversation is timeless as we all shared similar experiences. The NVC has always served the unique comradery of veterans at the hall, as advocated in the Preamble of NVC Constitution.

Part 3: Exile of the Matsuba Family to Japan

Secretary Norman Mineta Special Interview prior to his visit at UW...