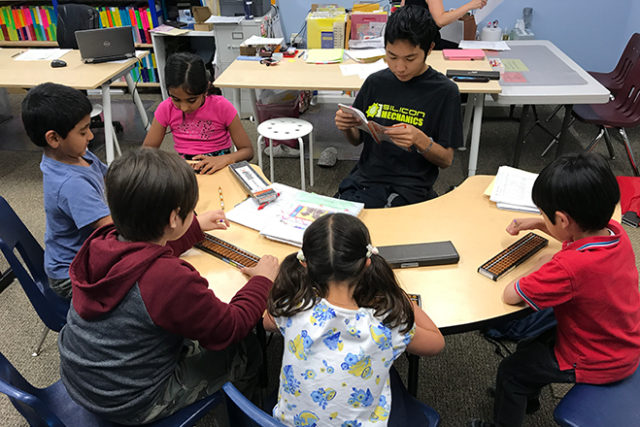 A workshop held by Hidetaka Miyanaga, Chairman of Daiichi K.K, an abacus-making company from Banshu (the old name for the southern part of Hyogo Prefecture) will show you how to make your very own abacus. It will happen in the festival’s Soroban (the Japanese term for abacus) Village. Miyanaga will be joined by Tetsuya Sano of the Math Abacus School of Seattle. The two will talk about the charms of the abacus.

What will happen at the Cherry Blossom Festival Soroban Village?

The Soroban Village is a place where abacuses are made, operated by Dai-Ichi KK. You’ll be able to make your own unique abacus, customized with balls of many colors. In the US, this was first unveiled in Bellevue at the Japan Fair. A lot of people had fun experiencing a traditional Japanese craft firsthand. This will be the first time at the Cherry Blossom Festival. I hope many people will give it a try.

Please tell us about the history of the Banshu abacus.

It is said that the origins of the abacus date back to 3000 BC in the Mesopotamia region where a sand abacus was used. It changed shapes as it spread through the West and China, and it entered Japan early in the 14th century. It came from China to Nagasaki, and from there to the seat of the Shiga Prefecture government in Otsu. The Banshu abacus from today’s southern Hyogo prefecture came about in the latter half of the 16th century, during the fighting of the Sengoku era. People from Banshu fled the fighting and took refuge in Otsu. They learned how to make the abacus there and took their skills back home to Banshu after the fighting. Since then, the area around Ono City in Hyogo has been the center of abacus making in Japan.

The Banshu abacus is designated by Japan as a traditional craft product. What exactly is it?

Abacus making is divided into four categories: carving of the balls, finishing the balls, making the frame, and assembling all the pieces. There are expert craftspeople for each of those parts. They aim for an abacus that will last a long time and is easy to use. Thirty workers from nine companies work out the details together. The materials are almost all sourced in Japan. In Japan today, two places make the abacus: the Unshu abacus in Shimane Prefecture and the Banshu abacus in Hyogo.

Why should you learn to use an abacus when you are a child?

When using an abacus, you are thinking as you move the balls. It stimulates the brain’s prefrontal cortex, which is mainly responsible for ideas and creativity. It exercises your brain. In childhood, the brain is flexible. If children learn the abacus before they learn their sums at school, they can see the abacus in their mind’s eye as they calculate sums in their heads. It has been shown in lots of research to improve the spatial cognition related to math and science skills. Because we use our fingertips and brain when working on an abacus, it is said to help prevent dementia.

Use of the Japanese-style abacus is spreading through Asia, the Middle East and Europe now. It’s gotten the attention of the world because it fosters self-study and self-learning. You listen to the teacher and then solve the problem yourself. In Ono City, they collect used abacuses from all over Japan and donate them to developing regions such as Tonga or northern India.

*Venue and schedule may change. Please refer to Venue & Schedule sheet at the event site.

Math Abacus School of Seattle
In classrooms in Bellevue, Seattle, Bothell and Issaquah, students young and old are taught directly in small groups. As they learn about the abacus in both Japanese and English, they build computational and mental math ability.
425-635-8326 | info@AbacusSeattle.com

Dai-Ichi KK
This abacus maker, founded in 1909, is located in Ono City, Hyogo Prefecture. Its My Abacus Factory (Soroban Village) holds events around Japan and the world to tell people about the great qualities of the abacus.

Nisei Queen and Princess in 1967