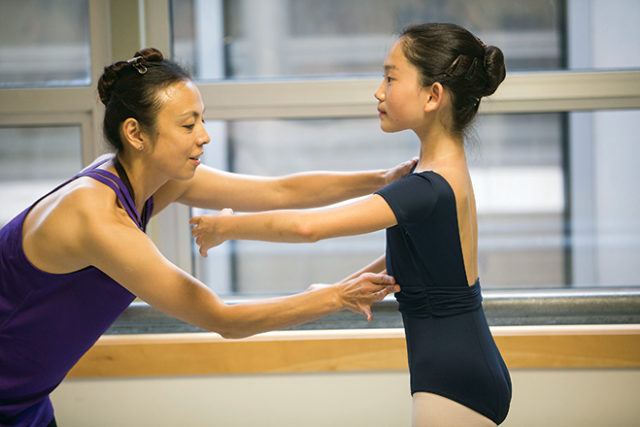 She puts on a fluffy dress, strides onto the romantic stage and dances splendidly. It’s the dream of many a girl to be a ballerina. Kaori Nakamura, a top dancer for Pacific Northwest Ballet (PNB), lived that dream, dancing for years on center stage. Nakamura is also teaching in the Pacific Northwest Ballet School these days. We caught up with her to see what life is like for a star ballerina.

Nakamura has danced the lead in classic ballets such as Swan Lake, Giselle, Don Quixote and many more. She’s been a top dancer for years. It can’t be easy being a star dancer year after year. What motivates her? “Ballet is one part of my life,” she says modestly. “I’ve just continued to do what I always wanted to do.”

When she retired from dancing in 2014, she was 44. The brown-eyed dancer was spirited all the way through her final performance, dancing with passion and elegance. “As I got older, my dancing style and the way I interpreted my roles changed,” she said. “It was interesting to feel these changes.”

“Playful Kaori may be, and sweet she certainly is, but the seriousness with which she serves her art is stunning to observe and admired by all who work with her,” PNB Founding Artistic Directors Kent Stowell and Francia Russell said in a statement.
When I ask Nakamura what sort of dancer she was, she replies with a smile, “I don’t know. I just try as hard as possible with the role I’m given.”

Talking with Nakamura, it strikes me that ballet is a traditional Western entertainment of style and grace passed down through the generations. And to understand it fully, one has to completely focus herself on the art. Thanks to the efforts of those people, we are able to enjoy this art form.

Nakamura now trains the junior dancers. She has a good reputation as a teacher. “Kaori has been a mainstay of our faculty since her retirement from dancing,” said Peter Boal, director of the Pacific Northwest Ballet School and artistic director of the PNB. “She brings the same high level of dedication and commitment to the classroom that she brought to the stage as a world-renowned ballerina. Offering the highest standards of technique and musicality along with invaluable encouragement and support, she is an ideal role model and an inspiring teacher.”

Of course, when I ask Nakamura what sort of teacher she is, she replies, “I don’t know.” But the image she aspires to is that of her former teacher, Reiko Yamamoto. “Yamamoto-sensei wasn’t just about ballet. She was strict about life. I lived with her, and helped with the cleaning and washing and meal preparation. She drilled into me how to greet people and how to behave. She was so strict, and yet she had affection for me as if I were her daughter.”

Just like her former teacher, Nakamura teaches manners as well as ballet technique. “I guess I am a strict teacher, especially with the young ones,” she said. “If a child is talking or not focusing, I’ll gently admonish them: ‘Why are you here? Did you come to learn or play?’” She has a mild voice and gentle smile, but her look is serious enough to make me sit up straight through the whole interview.

“I don’t think of ballet as just something to learn.I want people to have the approach of a pro,” she said. “Your dance is a reflection of your heart, so to become a pro dancer, your humanity is very important.”

Of course, some children just want to learn a little ballet, so the balance is difficult. “Little kids need to enjoy ballet or they won’t continue,” she said. “You can’t just scold them and make them afraid. You need an affectionate discipline.”

Since she began teaching, she has a new appreciation for how difficult ballet is. She now uses her head more in class than she used to. “When I was on the stage, I didn’t think much,” she said. “But now, during a lesson, I’ll check my body. I’m conscious of the way my muscles move and are used when I’m teaching the students.”

It’s said that ballet is all about the “turnout,” when the feet are twisted sideways and the hips are opened. But some kids can do that right away, and others can’t. “Each student’s body is different,” Nakamura said, “What I say, how I teach and what I try to impart differ based on their abilities. Ballet is difficult.”

Nakamura teaches students from 8 to 18 years old, and from level 1 to the professional division. Since last year, she expanded her activities to include auditions in Japan for the summer class. “I hope I have more opportunities to teach in Japan,” she said.

Leaping into the ballet world

Nakamura started ballet when she was 7. “It was more about putting on the toe shoes and the tutu than the dancing.” She entered her first competition in 4th grade. In 5th grade, she came in third; in 6th she finished second; and in middle school, she won. She was encouraged to find herself on the threshold of being a worldwide ballet dancer. She entered the Prix de Lausanne, and then attended the School of American Ballet in New York on a scholarship and graduated in a year. She was on her way to becoming a top ballerina, but did she ever consider a different path? “There were often times when I hated practice or hated that I couldn’t do something,” she recalled, “but I never thought of quitting ballet.”

Once she put her mind to it, she leaped into the ballet world. “I didn’t go to high school. I convinced my parents that if I was going to do ballet, it would be a waste to go to high school. When I look back, I think it was an immature way of thinking, but I was young and fearless. I had no brakes.”

Her parents must have worried as she forsake high school for New York. Thirty years ago in Japan, it was hard to imagine making your living as a ballerina. Plus, there was always the threat of injury. They didn’t say anything at the time, but her father felt that she should have at least graduated from high school. “Even then, they let me do what I wanted. I am grateful to them,” she said. “If I had gone to high school back then, who knows how I would have turned out.”

Today, she has a daughter about to turn 6. What will Nakamura do if she doesn’t want to go to high school? “First, I’d be against it, I think. As her parent.” She cracks a maternal smile. “She started taking ballet when she was 4 and retired when she was 5. She’s a strong-willed kid. She’s not very good at standing still for a long time, so ballet’s not going to be her thing. She’s trying gymnastics now.”

A pro gives it her all

Since deciding in middle school to pursue ballet, Nakamura has never looked back. But it must have been a big change when she retired from dancing. “When I retired from dancing, I could concentrate on teaching ballet,” she said. Ballet is part of her life, so she does whatever she can in that field. It sounds normal, but it is a rare person who carries that sort of thing out. When she says she wants children to act like a pro, what does she mean? “A pro gives it her all.”

What sort of recommendations does Nakamura have for watching ballet in Seattle? “In Japan, the ballet world is held aloft, and it seems that only those involved go to watch it. In Seattle, all sorts of people go to watch. For someone who has never seen ballet, first I say they should see a PNB performance. The Nutcracker, performed every holiday season, is easy to understand and fun. Before the performance in the lobby, lots of children are all dressed up. It’s cute. In 2015 PNB premiered a newly-designed production of the Balanchine Nutcracker, so people who saw PNB’s Stowell/Sendak production in the past can go now and compare the versions. And this season, in February, we’ll be doing Swan Lake. It’s a very popular ballet.”

Kaori Nakamura was born in Gunma Prefecture. She learned to dance at the Reiko Yamamoto Ballet Studio and at the most prestigious US dance studio, the School of American Ballet. She won awards for her dancing in Japan; then in 1986, she won the Prix de Lausanne. She also took third in the 1988 Varna International Ballet Competition. In 1990, she joined the Royal Winnipeg Ballet in Canada and was promoted to principal dancer in 1995. She joined the PNB in 1997 and became a principal the very next year. From 2014, she began teaching at the PNB School.

Founded in 1974, Pacific Northwest Ballet School is recognized as one of the top three ballet training institutions in the United States. The school serves more than 1,000 students at its Seattle (301 Mercer St., Seattle, WA 98109) and Bellevue (1611 136th Pl. NE, Bellevue, WA 98005) campuses. Children under seven can join the school’s Children’s Division without an audition. The Student Division offers eight levels of instruction based on age, strength and physical development. The advanced Professional Division is for students planning a professional dance career. “We have all sorts of classes, like modern dance and pas de deux,” says Kaori Nakamura. Because the school is an annex of the ballet company, students have opportunities to step onto the stage. “When I watch those students get up on stage,” Nakamura says, “it’s as if I am dancing myself. I’m just as happy and worried and nervous.”

Behind the Tadaima! Scenes with Kimiko Marr of Japanese American Memorial...