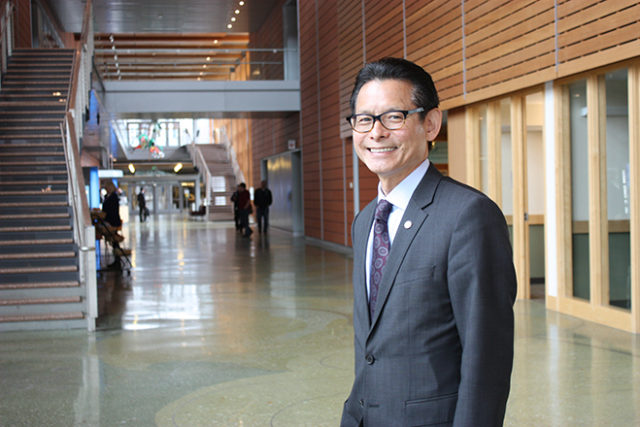 Bellevue has grown from a predominantly affluent suburb to a diverse, booming city in about adecade. The one constant during that remarkable decade is that Brad Miyake has been there — first as deputy city manager, then as city manager — helping to manage the potentially explosive growth through the leadership of the City Council. He’s seen the city change from a car-centric residential area to an urban center second only to Seattle in the state when it comes to consumer spending power. Miyake is a son of Seattle, having gone to Franklin High School and the University of Washington. After working for King County, he found a job in Bellevue city government and quickly worked his way up the ranks. Now he manages one of the state’s most dynamic urban cores. We sat down with him to discuss the challenges he faces. Excerpts follow.

Brad Miyake is a Seattle-born Sansei. He attended Franklin High School and the University of Washington business school. After a stint working in King County, he transferred to Bellevue, where he quickly rose through the ranks, becoming deputy city manager in 2006 and city manager in 2014. He is married and has two daughters.

Could you tell us a little bit about your family?

I was born and raised in Seattle. I am Sansei. My grandparents were Nisei. My father’s family was from Hiroshima. They immigrated to Sacramento, California, and ran a grocery store business there. My mother’s family was from Nagano. My grandfather ran a store as well. He was an antique collector and a merchant. He was a master in Kendo. And he actually converted the family to Catholicism.

I am married to a Sansei who is born and raised here. I have two daughters. Both work for tech companies.

I attended Franklin High. Franklin was a great experience for me because it was such a diversified school. In the Central Area where I grew up, it was predominantly Caucasian
and African American. At Franklin, I had the opportunity to meet more Asians. I made a lot of friends there who are my friends today.

What did you do after graduation?

My first job out of college was working for the Government Accountability Office as a management analyst where I evaluated federally funded programs. I worked there for a short time, then moved on to King County where I worked in a number of management positions. I actually worked at the Kingdome for a spell as their finance manager before they blew it up! After King County, I moved on to the City of Bellevue where I have been since. I’ve been here for over 20 years. I started out in Finance, managing the development and implementation of budgets here. This position provided me a great background on the finances of the city. After working in Finance, I went on to work in the
city’s Utilities Department, where I was the deputy director and ultimately the director, overseeing water, sewage, storm drainage and solid waste. While in the Utilities Department, I was asked to be the interim deputy city manager. I never fully intended to stay in the manager’s office, and didn’t even apply for the position. But they went out on a national search and the manager at the time, around 2006, couldn’t find anyone to meet his qualifications. He asked me why I didn’t apply and I said I didn’t think I was qualified for the job.

He disagreed and ultimately offered me the job. I served as the deputy city manager for the next seven years.

How is a city manager different from a mayor?

A lot of people don’t know about our form of government. It’s a council-manager form
of government where my position is not quite the same but is similar to a CEO. The board of directors would be our council, which hires a CEO to run the city. In our case, I run the day-today operations of the city. I do all the hiring. The council hires one person, and that’s me. That’s actually by state law. The council provides the vision and sets policies and priorities for the city.

In 2006, did you have any idea how big Bellevue would become?

Oh no. Absolutely not. We have experienced this huge growth for the last five or 10 years that has been transformational for the city.

There is a lot going on in Bellevue. I think there are some themes when you look at the growth. We’re moving from a suburban to more of an urban environment. It wasn’t that long ago that this was a community that was middle class, higher-income and predominantly Caucasian. Now, it’s more of an urban environment with a lot of diversity. We are a city of over 50 percent people of color. The majority of those are Asian, predominantly Chinese and East Indian, but with Korean and other ethnicities mixed in. I think the Japanese make up 6 percent of the population.

The commercial business end of it has grown tremendously. Our daytime population with jobs has surpassed our population. We have about 150,000 jobs here in Bellevue, and our population is 140,000. Population-wise, we are the fifth largest in the state. But if you look at retail sales tax collections, which is an indicator of business transactions, we’re only second to Seattle. We are quickly attracting a lot of high tech, especially in
the area of virtual reality.

Some people don’t know this, but there are a number of companies headquartered here.
T-Mobile. Paccar is here. Concur (Technologies). Eddie Bauer. Pokémon. And other companies are investing here including Amazon, OfferUp, Huawei, Salesforce, Tencent, Samsung and many others. In fact, REI is moving its headquarters here. They should be up and running in 2020.

Also, in the Bel Red Corridor, we have the Global Innovation Exchange, called the GIX, the University of Washington’s graduate school in partnership with Tsinghua University in China. The graduate program in technology is focused primarily, as I understand it, on innovation and startups.

Is the competition to keep and gain jobs pretty fierce?

We have something on the Eastside called the Innovation Triangle, which is in partnership with Redmond and Kirkland and Bellevue. It’s focused on making sure that we keep the jobs here, especially in the area of technology. For example, when Concur outgrew Redmond, they came to Bellevue. We don’t look at winners and losers between cities; we look at how do we keep them in the region. On a larger plane, the region is working together with Seattle and others to make sure that we keep jobs here. There are other cities around the United States that are trying to attract big companies like Microsoft and Amazon away from Seattle and Bellevue.

Bellevue is much more walkable than it used to be.

That’s not just by happenstance. That’s a result of thoughtful policy choices. We have very
responsible land use and transportation policies. They go hand in hand in terms of development policy. When you think about densities in your city, you also have to think about the transportation infrastructure and how you get people around. There was a deliberate policy direction to allow density in the downtown core but, at the same time, make sure that density worked hand in hand with the multi-modes of transportation such as light rail, bus transit, car sharing, bicycling and walking.

With the growth has come a lot of diversity.

Yes. How do you provide services and do your outreach to such a diverse community? We are always reinventing in the city. There are almost 100 different languages spoken in the Bellevue School District. There is a lot of diversity in the Crossroads area, but it is not just Asian. It’s also Eastern European. Among some of our immigrant communities, there’s a lack of trust in government. How do we overcome that? Something that has been wildly popular is our cultural conversations that we hold at City Hall where we have hundreds of people attending. It gives people an opportunity to sit at a table with people of a different culture and talk.

Talk to us a little about the quality of life in Bellevue. Why would someone move here?

Simply put, it’s the high quality of life. Sixty-four percent of people here 24 years of age or older have a bachelor’s degree. That compares with roughly 29 percent nationwide. Our estimated median income here is nearly $114,000, compared with $50,000 across the United States. That’s according to the U.S. Census Bureau’s 2016 American Community Survey. The high schools in Bellevue always rate in the top 100 in the United
States, and they’re public schools. That’s a pretty good deal. We have almost 100 parks. The tagline is “a city in a park.”

That leads me to our Grand Connection. One of our iconic visions for the city is creating a nonmotorized path/walkway from Meydenbauer Bay through our downtown park, through our downtown core, through our pedestrian corridor, up to our transit center and across 405, into our Wilburton area to connect to the Eastside Rail Corridor. It is in the infancy stages of design.

What other ways will the city change in coming years?

We can expect to see more retail and residential growth in other areas of the city. For example, we are looking at land use changes in the Wilburton area, which is about 300 acres and where the REI store is located. The Bel Red corridor, which is roughly 900 acres, is also primed for more retail growth. The Spring District is transforming as well
with REI relocating its new headquarters there in 2020.

Light rail will run across I-90, down Bellevue Way and north on 112th. But the cool thing is that once it gets to Main Street, it goes underground. There’s a tunnel that goes underground all the way up to 110th and daylights at City Hall. That’s at least halfway done.

Bellevue is about 35 square miles, made up of 16 neighborhoods, and our fastest growing neighborhood is downtown. Roughly 10 percent of our population lives in downtown. We just increased the height limits. In the core part of downtown Bellevue, it was capped at 450 feet. The updated land use code allows for towers up to 600 feet in height.

35% of Bellevue’s population were Asian in 2016, putting Bellevue
ninth in the nation of large cities (100K+) for having one of the highest
percentage of Asian residents

Introducing “Journey to the East”