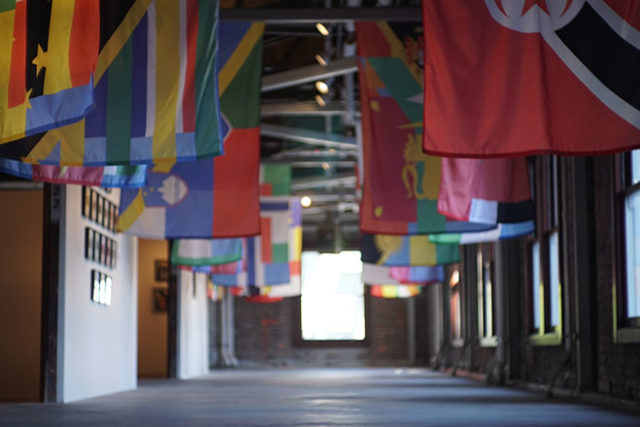 As tragedy and horror begin to hold a regular place in the daily news, people sometimes forget that those things that set them apart are often the same things that unite them.
“How does nationalism create a sense of belonging? Of alienation? How does our clothing identify us and isolate us? Are symbols of our cultures liberating or do they imprison us? How can we belong if we are deprived of home? How can we belong if we have been separated from our land? How do Americans, a nation of immigrants, belong to a land—of indigenous peoples—that is occupied and colonized? How do disparate voices join together to build resistance?”
These are the words—or questions, rather—inscribed on a wall placed at the entrance of BorderLands, an art exhibition that opened its doors to the public earlier this month. The gallery is located on the top floor of King Street Station, a wide open area with dusty, glass windows letting in blades of light and thick beams traversing the ceiling above solid, hardwood floors—a space that the city of Seattle will transform into a “hub for arts and culture.” Through a partnership between the Seattle Office of Arts & Culture and the Seattle Department of Transportation, this new space was created to provide people of color with an opportunity to present their work.
BorderLands, which presents the myriad works of artists Anida Yoeu Ali, Ryan Feddersen, Satpreet Kahlon, Pedro Lasch, Henry Luke, Ries Niemi, Carina A. del Rosario, Crystal Schenk and Inye Wokoma, is the first to occupy this new space. These installations were presented alongside a separate one—And She Persisted: Voices of Women Artists—which presents a selection of 38 works created by female-identified artists who “challenge assumptions, take risks and break barriers to create objects of incredible beauty and depth.”
“Throughout history, women have been depicted as keepers of hearth and home, creating a sense of family and belonging wherever they are. In most cultures worldwide, women are portrayed as nurturers, quietly conveying life’s lessons to children and loved ones, as conduits for the transfer of generations of cultural language,” Deborah Paine, curator for Seattle’s Office of Arts & Culture, said. “The work of women as artists, however, often moves well beyond these limited boundaries of identity.”
BorderLands will be open until October 29 with varied hours depending on the day of the week. A series of lectures, performances and engaging activities will be held on Saturdays throughout the show.