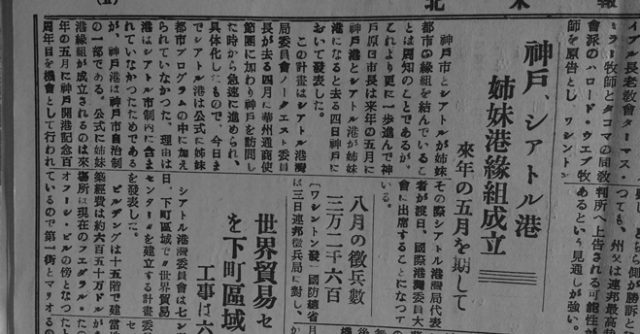 Kobe and Seattle have been known for their sister city relationship. Taking a step forward, Kobe Mayor Chujiro Haraguchi announced on June 4 that the ports in both cities will begin this sister port relationship next May.

This project progressed rapidly when Port of Seattle Commissioner Robert W. Norquist visited Kobe as a Washington State Trade Delegation member. The port relationship had not been included in the sister city program until today. The reason is that the Port of Seattle does not belong to the city’s government while the Port of Kobe is governed by the city.

The sister port relationship will officially begin next May in the centennial celebration of the Port of Kobe. The Port of Seattle representative will visit Japan for the event and also attend the International Port Commission Conference.