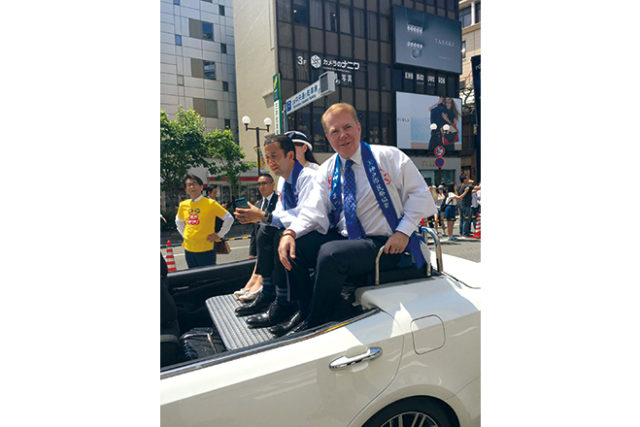 Seattle Mayor Ed Murray visited Japan and joined the 46th annual Kobe Matsuri festival as a special guest during his week-long trade mission. Murray, joined by his husband Michael Shiosaki, participated in the street parade that attracted over 500,000 visitors.

“Honored to join the Kobe Matsuri parade with Michael. Kobe & Seattle have deep ties, #SisterCities since 1957 ,” Murray tweeted on Monday.

The sister city relationship was celebrated through a youth exchange program put on the by the YMCA, which reached its 60th anniversary during the parade as well. A musical exchange jazz concert event was also held prior to the Kobe Matsuri on May 10 featuring the winners of the 2016 Seattle Jazz Female Vocalist contest, Kristina Buno, from the high school division, and LaVon Hardison of the adult division.

In Kobe, Murray also joined a press conference for the opening of a Starbucks flagship store in Kobe’s Meriken Park in commemoration of the sister city relationship and the 150th anniversary of Port of Kobe.

During his visit to Japan, Murray will promote business development in the biomedical and manufacturing sectors with local leaders, and promote exchanges on LBGTQ rights and environmental stewardship. Prior to Japan, he visited China for five days with a trade delegation.

“For most of its history, Seattle has had deep cultural connections to China and Japan, with sizeable immigrant populations from the two nations and continuing cultural and educational exchanges,” the press release states.

Mayor Pushes Upzone in the Chinatown-ID