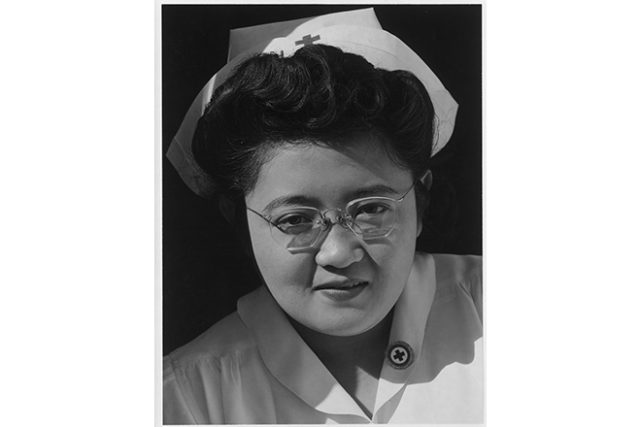 Now and then, in this column, I have shared snippets of my late Auntie Natsuko’s story:

(a) of her being among the first non-white students in the nursing program at Seattle University before World War II;

(b) of how she disappeared from Seattle after Pearl Harbor, according to family correspondence; and

(c) of how I believed she had joined two other SU Nisei nursing students who were whisked off to Denver the morning after the start of war by kindly faculty nuns to ensure that they completed their training.
On this latter point, however, I had erred, according to a follow-up conversation between Fumiko [Nishinaka] Hayashida—the face of Japanese-American internment—and my Auntie Sue (both now deceased).
“David got that one wrong,” Fumiko had told Auntie Sue. “Natsuko was hiding on Bainbridge with us.”
Fumiko’s remark made all remaining pieces of the puzzle fall into place:

(d) Natsuko’s re-appearance in Seattle in late December 1941, again according to family correspondence;

(f) how Natsuko had seemed to know everyone present when I accompanied her to a Bainbridge Island Japanese community picnic in the early 1980s.

Perhaps the best-fitting jigsaw piece of all is a remark my late dad made about growing up with Natsuko, who was by fate the “bossy big sister” of the Yamaguchi Nisei (two older sisters had been left in Japan after World War I).
“You couldn’t tell Natsuko anything. She did everything her way.”

In any case, apparently when Natsuko felt that Seattle was safe for JA students, Natsuko resumed her SU nursing training where she had left off.
In her final year in 1941-1942, Natsuko’s days involved hands-on training and rooming at Providence Hospital (now Swedish Cherry Hill). To this day, the class photos of the nursing classes that trained there from 1924 to 1950 hang in the north-bound hallway behind the lobby’s Starbucks.

The last, most important puzzle piece comes from the Nishinaka family’s oral history, told to me by Fumi’s nephew, James Arima (grandson of Sumikiyo Arima, the Issei founder of the North American Times [Hokubei Jiji], the 1902-1942 predecessor of this paper).
“Natsuko boarded the train, and accompanied the Bainbridge people to Manzanar as a nurse.”
“You didn’t know that?” I remember James adding.

As the Bainbridge Japanese left their beloved island in late March 1942—the first mainland families to be incarcerated after the fearful community sweeps of Issei fathers during December 1941-February 1942 (see Nisei Daughter)—those sweet SU nuns must have given Natsuko her June diploma early. I would imagine them handing it to her saying “Here, you’re going to need this.”

The young Natsuko was exactly what the Bainbridge people needed. There were elderly and babies aboard that crowded train of 227 islanders. As a JA friend of the Nishinakas, she was an immediate insider. Like many Nisei eldest daughters, she spoke fluent Japanese. Moreover, Natsuko had rare skills: as most Seattle Nisei were still in high school in 1942, there were simply few other university-trained Nisei nurses available in greater Seattle to accompany the Bainbridge people. The Providence nursing class photos show only one other one: Mary Kawamura of the SU class of 1940.

The ultimate proof of Natsuko’s story is a photo my niece, Lauren Mamiya Valdez, found on the Internet of Natsuko at Manzanar. Natsuko boarding the train is the simplest explanation for how she made the 950-mile journey there in wartime.

Later in the war, when most Bainbridge people opted to transfer to the Minidoka camp, Idaho, where their Seattle friends were, Natsuko accompanied the islanders there as well. At Minidoka, she helped staff the hospital and rejoined her own family. Many Nisei I have met through this column remember working under Natsuko as nursing assistants there.
The Yamaguchi family oral history is that Natsuko later joined a medical team that visited all the camps to report on public health conditions.

After obtaining her master’s degree at Columbia University and returning to Seattle, I believe Natsuko first worked for the King County Health Department. I recall my late mom telling me about Natsuko describing hundreds of Seattle Nisei who returned to Seattle from the camps with tuberculosis. I recall the number was about 280 (including my mom). To my knowledge, the public health aspects of the camps have yet to be reported in depth.

Later, Natsuko began a PhD program, I believe at the University of Washington, and married my uncle, Que Chin (against the wishes of my grandparents!), before quitting the program to become a better mother to my cousin Mari [Chin Louie].

Auntie Natsuko spent the remainder of her career working at Group Health Hospital on Capitol Hill. Her name is listed on a career-long plaque there, as well as on at least one similar plaque at a Group Health administrative office downtown.

In her retirement in the 1980s, Auntie Natsuko helped various community nonprofits, among them I believe the International District Health Clinic. She was so active that Mari got mad at her “for never being home.” Natsuko also traveled extensively, making multiple extended trips to the ancestral family home in Fukui prefecture, Japan, where her Tacoma-born sister Taeko lived (and where Taeko’s daughter and granddaughter live today).

Across the post-WWII decades, credit has been rightly given to exceptional Issei and Nisei for the selfless things they did for the community during and after the chaos of World War II. But Auntie Natsuko received no community recognition, I believe it was because few knew her story. This gap in knowledge occurred in part because, like many of her vintage, Natsuko seldom talked about her past.

I believe Auntie Natsuko’s story remains significant today because she boarded an internment train voluntarily to meet the needs of her people. (Seattle Nikkei would not be incarcerated at Camp Harmony, Puyallup, until early May 1942). It broadens the story of the Bainbridge Japanese by linking it more closely to Seattle history. It helps complete the background stories of the few who were captured in Ansel Adams’ magnificent photographs at Manzanar.

I welcome comments to davidy@napost.com from readers who remember further details of Auntie Natsuko’s story, especially if they remember her on the train to Manzanar.

I Matter: A Personal Reflection