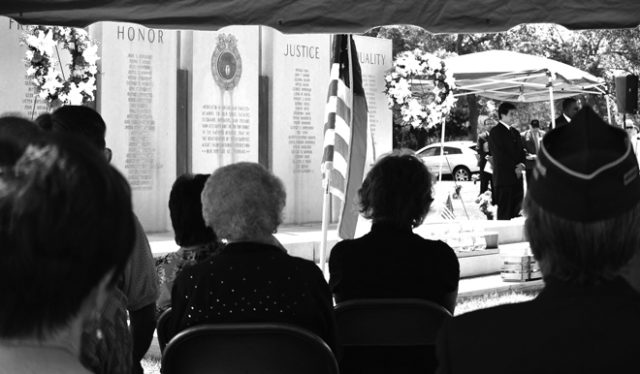 It’s a hackneyed cliché to say “death is part of life,” but like many clichés, just because it’s become trite doesn’t mean the phrase isn’t true. Especially for Buddhists, death is a natural part of the cycle of living in this world.

Death didn’t touch me much when I was young—I didn’t attend my first Japanese community funeral until my father died in 1992 and I was in my 30s, and my mother arranged for a Buddhist service. Since then, I’ve attended lots of funerals in Denver’s Japanese community, both at Tri-State Denver Buddhist Temple downtown in Sakura Square (the city’s “Tiny Tokyo”) and at Simpson United Methodist Church, a historically Japanese congregation in a suburb.

I haven’t attended a funeral in Japan, but I have been at memorial services in Japan—when my grandmother in Japan died, my mother wasn’t there. But Buddhist traditions require memorial services at certain intervals, starting at seven days after the death, the 49th day, and then the first, third, fifth, seventh and 13th year anniversaries of the death. I traveled to Hokkaido to attend the first year anniversary service for my grandmother.

My wife Erin’s grandmother passed away late last year, and it seems like we’ve attended a lot of funeral services since then. Denver’s JA community has been heading to church and temple throughout the week, not just on Sundays. Death is a part of life, indeed.

I’m sure funeral services for Japanese Americans are mostly similar to Japan. But I suspect we skip some traditions, like adding six coins (to pay for passage across the River of Three Crossings, which sounds very much like the ancient Greek and Roman tradition of crossing the River Styx when one dies), or a white kimono and items such as cigarettes and candy that were favorites of the deceased to the coffin.

At the Tri-State Denver Buddhist Temple, funeral services include some basic components, though they can be in different order. At the beginning, the reverend announces the Buddhist name of the deceased, which may have been given while the person was alive (I have one, though I can’t remember what it is) or given after death.

Then the reverend, or reverends, chant while attendees line up to offer “oshouko,” offering a pinch of incense into burners in front of the altar, where a photo of the deceased is placed (and the casket if available). Erin taught me the details of how to act—when to hold the ojuzu prayer beads, and how to bow before oshouko to the photo or casket, and then bow deeply to the family in the first row, to show respect.

Then family members give reminiscences, the reverends give sermons and homilies, and the attendees head to a meal provided by the family. This can be in the temple’s auditorium or it might be a family-only affair at a local restaurant.

An aside: Japanese Americans head to Chinese restaurants for large banquets or family gatherings, especially after funerals and Memorial Day services. Going out for “China-meshi” is a given, probably because Japanese restaurants aren’t often built for large groups, and Japanese food can be labor- and cost-intensive. There isn’t a tradition of “family-style” serving of Japanese cuisine.

Christian services in Japanese American communities are familiar to any Christian churchgoers—we’ve been to Catholic and Methodist funerals for JAs in the past few months. Both in Japan and in Japanese American communities, and in both Buddhist and Christian, the tradition of “koden” or “okoden” is observed. That’s a monetary gift given in envelopes to the bereaved family. In Japan, the envelopes are traditional decorative folders with colorful bows and ribbons tied around it; in the United States, Japanese Americans use regular mailing envelopes scrawled with the name and address of the givers and words of condolence on the front. The amount might be $20 to hundreds of dollars depending, and can be by check or cash, but if it’s cash, the bill should not be crisp and new, but old and worn.

JAs have added another tradition that Japanese don’t follow: The family of the deceased send thank-you notes to everyone who gave koden and include some stamps. Yes, U.S. postage stamps, usually just a few. I haven’t been able to find out why this is done—someone please email me if you know!

Funerals are sad, of course, but also have a celebratory aspect, like an Irish wake. The communal dining afterwards is an opportunity to celebrate the life of the person who passed away, and for family and friends to see each other and catch up with everyone’s lives. Funerals are often reunions for people who haven’t seen each other for a while.

As I write this, Memorial Day is coming up, and like funerals, memorial services held at gravesides in area cemeteries can also be little family reunions. We always meet the Buddhist reverend at one cemetery, and he gives an abbreviated version of a service, then moves on to the next memorial service, staying busy all weekend. Before the reverend arrives, we clean the gravestones, and we have incense to burn and bring our ojuzu beads for prayer and leave flowers. Erin and I then drive to another cemetery across town to pay homage, clean the graves and leave flowers for her father’s side of the family.

We’ll take my mother this weekend to my father’s grave at the Fort Logan National Cemetery. She’ll clean his gravestone and trim the grass, and we’ll leave flowers and burning incense.

On Memorial Day, many people in the JA community gather at yet another cemetery to pay tribute at the Nisei Veterans Memorial, built to remember the soldiers who fought bravely in the 100th Battalion/442nd Regimental Combat Team in Europe and the Military Intelligence Service in the Pacific during World War II. Community leaders, veterans and their families, as well as families who have fallen military in their ranks, politicos and the Consul General of Japan at Denver attend, give inspiring speeches and leave flowers.

Carved on the back of the stone monument are names of Japanese American veterans who have died since World War II, including my father, George Hisayuki Asakawa.

We always leave a flower under his name because even though death is part of life, it’s the responsibility of the living to keep alive the memory of the dead.

[Editor’s Note]
This article was originally published in Discover Nikkei at www.discovernikkei.org managed by the Japanese American National Museum. Gil Asakawa writes about pop culture and politics from an Asian American and Japanese American perspective on his blog, www.nikkeiview.com. He and his partner also co-founded www.visualizAsian.com, where they conduct live interviews with notable Asian American Pacific Islanders. He is the author of Being Japanese American (Stone Bridge Press, 2004) and served as the Pacific Citizen’s editorial board chair for seven years as a JACL national board member.

Coronavirus: How Should We Live?

The Unseen Price of Redress

DISCOVER NIKKEI: An Open Letter In Support of the Tule...