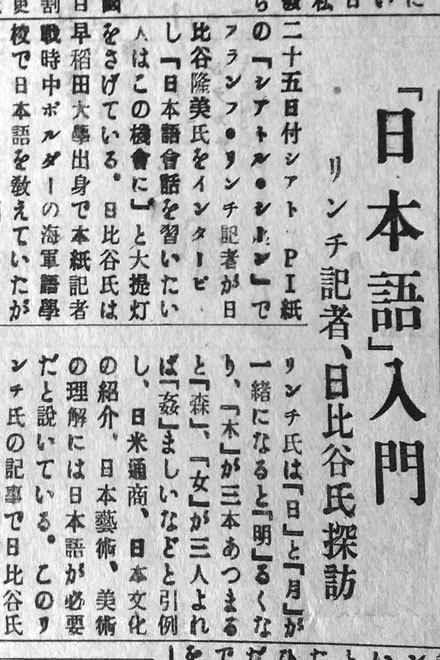 The Seattle Post Intelligencer has featured The North American Post’s reporter Takami Hibiya while promoting Japanese language learning in an article written by Frank Lynch on Oct. 25. Hibiya is a graduate from Waseda University and taught Japanese at the U. S. Navy’s Japanese language school in Boulder, Colo., during World War II. He was a middle school teacher at Seattle Kokugo Gakko before the war and is currently a Japanese conversation teacher at Seattle Japanese Language School.

Lynch explained how the meaning of Japanese kanji characters can be changed when combined, for example, if the kanji for sun and moon are combined the meaning will become “bright” or if three of the kanji for tree are gathered it will become “forest.” He added that Japanese needs to be learned to develop U.S.-Japan trade and to understand Japanese culture and art.

After the article was published, Hibiya had inquiries about his Japanese conversation class, by which one can tell that many seem to be interested in learning the language.