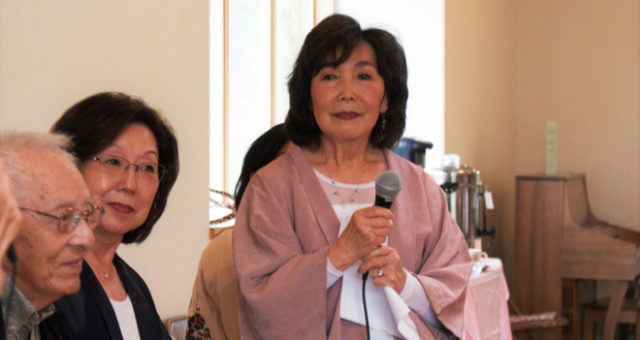 The book tells the story of the local entrepreneurs childhood in Japan during and after World War II. Hirai as a 11 year old girl beginning a new life in the United States with her mother. The book, published last year, contains seventeen chapters of personal anecdotes and experiences.

Last Saturday, the story was read by Shox Tokita as the narrator, Hirai herself as Keiko, Jean Nishi as the mother Fujiye, Kenji Onishi as Ojiichan/Uncle Koji and Geri Lynn Egeler as Mari/Aunt Kame.

About 40 people gathered to listen to the first two chapters: “Shiren (hardship)” and “Egg,” stories about an air raid in Kurume, Fukuoka and a visit to her relatives to ask for food, respectively.

One listener said, “I realized here how hard times were. Even relatives couldn’t help and share their food.”

During the drama, there are several scenes in which Keiko and her grandfather sang the Japanese children’s song “Suzume no Gakkou (School of sparrows)” together. Hirai said that this song is her personal memorial to her grandfather and her childhood in Japan.

Part of the audience joined in and found themselves wiping away tears.

Hirai also talked about her hometown of Kokura being the original target for the atomic bomb that was dropped on Nagasaki and described the struggles that continued even after the end of the war, when her mother worked at an American Army base as an interpreter.

“We were seen as the enemy,” she said. “A woman once spat on my mother. People said, ‘we’ve never seen Japanese women do that,’ but she did.”

She added that she was grateful for her background both in the United States and Japan. She said she was trained to work hard in Japan.

Readings will continue to be held for the public at 1 p.m. on July 16 at Japanese Cultural & Community Center of Washington and at 7 p.m. on July 30 at NVC Memorial Hall.