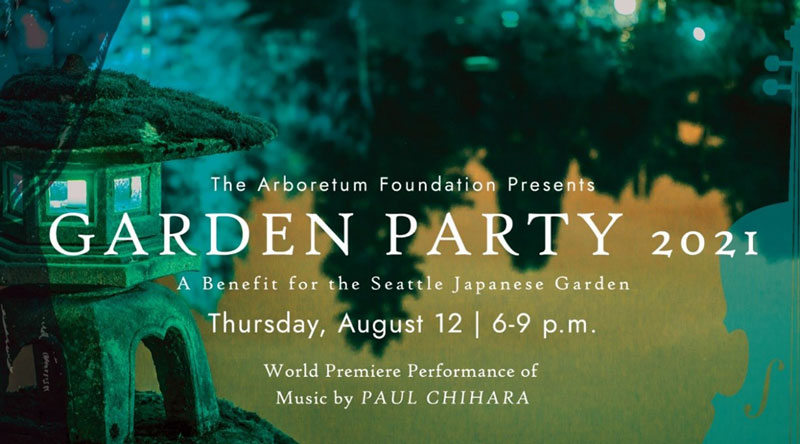 On August 12, the Seattle Japanese Garden will be hosting Garden Party 2021, a belated celebration of the Garden’s 60th anniversary. It is an in-person celebration and a biennial fundraising event. The party will be held in the garden from 6:00 to 9:00 p.m. and will feature traditional Japanese food and drink enjoyed in the lush and tranquil setting of the garden.

The intimate evening will feature the world premiere of Paul Chihara’s “The Garden of Enchantment,” an original chamber work for violin, percussion, and cello. The piece will be performed by Noah Geller, Mari Yoshinaga, and Efe Baltacigil of the Seattle Symphony. The work was commissioned by the Arboretum Foundation to celebrate the SJG’s long history and its special connection with Seattle and Japan.

An award-winning composer and native Seattleite, Chihara created the piece to celebrate the Garden’s 60th anniversary. Chihara’s distinguished record as a composer includes compositions for symphony, ballet, and the film and movie industry. His concert works have been performed by the world’s most renowned orchestras including the Boston Symphony Orchestra, the London Symphony Orchestra, the Los Angeles Philharmonic, the New Japan Philharmonic, the New Juilliard Ensemble, and the Orpheus Chamber Orchestra.

A second highlight of this special evening will be the presentation of the 2020 Japanese Foreign Minister’s Commendation to the SJG by Hisao Inagaki, Consul General of Japan in Seattle. The commendation is awarded “to individuals and groups with outstanding achievements in international fields, in order to acknowledge their contributions to the promotion of friendship between Japan and other countries and areas.”

Mr. Chihara is a Japanese-American composer. Born in Seattle in 1938, he has created scores for over 100 films as well as works for ballet, symphony, and choral arrangements. Chihara taught at UCLA and is currently a professor of music at New York University. His work has been performed on stages and screens across the United States and Europe, and celebrated all around the world. Opened to the public in 1960, the Garden has just celebrated its 60th “kanreki” anniversary season (NAP, June 2020). Managed jointly by Seattle Parks and Recreation and the Arboretum Foundation, the Garden welcomes over 120,000 visitors yearly from all over the world.

Regarding City of Seattle funding for the proposed enhanced shelter to...