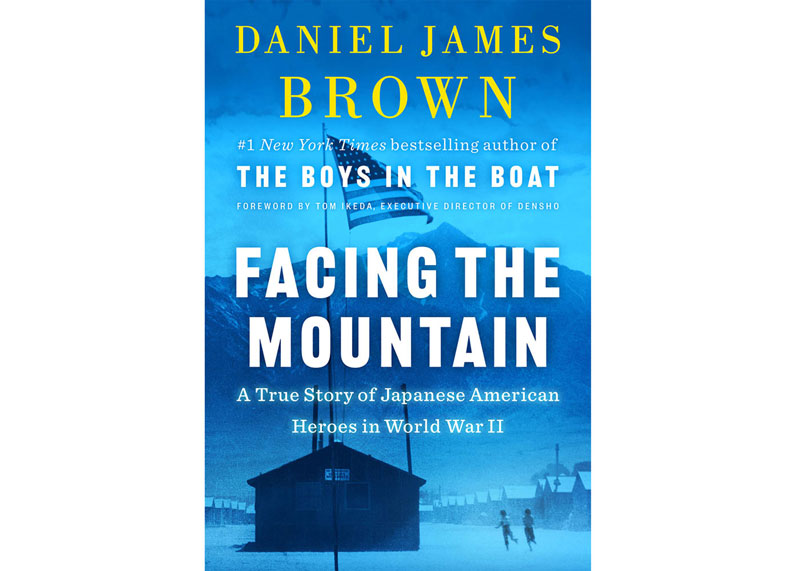 To be educated world citizens, we must start by knowing our own history well enough to summarize it to others. In today’s climate of renewed anti-Asian hate, “Facing the Mountain,” the new book by Daniel James Brown (2021, Viking, main text 482 pp.) should be required reading for all Americans.

Approaching the daunting topic of trying to explain the complexities of JA WWII history in a reasonable number of pages, Brown follows four individuals through the maelstrom. The perspective works because the reader gets to know and care about them, so depth is emphasized over breadth. Do they get through it and make it back home all right?

The four heroes tracked, drawing heavily from the archival work of Densho, were all young at the time of Pearl Harbor. Katsugo “Kats” Miho was an 18-year-old first semester ROTC student at the University of Hawaii. Fred Shiosaki was a 17-year-old high school student in Spokane. Rudy Tokiwa was a 16-year-old Kibei farm boy in the Salinas Valley, California (“Grapes of Wrath” country). Gordon Hirabayashi was a 23-year-old University of Washington student in Seattle, a Quaker, and a conscientious objector.

These young men, together with the people around them, stand in for the diversity of Nisei — the generation at the center of the JA dilemma — in Hawaii, on the West Coast, and inland.

The first three protagonists carry the story as soldiers in different parts of the 442nd Infantry, the segregated JA battalion that fought its way across Italy, France, and Germany. Miho, a math whiz, was selected for artillery. His tale illuminates for civilian readers how artillery and infantry complement each other in battle. Moreover, the artillery group later splits off to support other units during the Allied invasion of Germany during March-May 1945. Tokiwa became a trusted runner — a solo carrier of messages between units — and scout. In the latter capacity, he crawled on his hands and knees near the German front lines, reporting back on their positions and strengths. Shiosaki wielded a mortar.

New readers of JA history will find “Facing the Mountain” a good one-book introduction. Longtime readers will appreciate the depth of its research, how every few pages one is struck with an “I didn’t know that” feeling. Sansei retirees planning trips to Europe will refer to its detailed maps, nearly sufficient to enable one to find on one’s own the storied places of JA history in Europe.

A final reason to read “Facing the Mountain” is its superb epilogue. It is probably the best concise summary of postwar JA history available. It outlines for Sansei and Yonsei the debt we owe our parents, grandparents, and all who served during WWII, in myriad ways, for what they made possible for us.

Page 317: “Hiro Higuchi and Masao Yamada [the two chaplains] were right there with their men, crawling through the minefields to retrieve mangled bodies… On September 1 [1944]… Yamada accompanied… a dangerous mission well beyond the front lines to retrieve a body. With an enlisted man… driving their jeep… they hit one of the antitank Teller mines… Yamada… with nine pieces of shrapnel in his left arm, left leg, chest, abdomen, and buttocks… staggered his way… back… he refused to be treated, demanding instead that Rudy drive him… to see if they could help the others…

Page 333: “German artillery had long since zeroed in on every crossroads… around Bruyeres [France]… Anyone… was likely to be hit. Such was the fate of one… man… When a graves registration team brought his body in… Higuchi

had to check the dog tags… It was George Saito.

“A few days later George’s last letter to his father arrived in Massachusetts. Kiichi was heartened to receive it. Then, as parents all over America were doing, he began to wait for the next one. But it never came…

Page 471: “Rudy… came home changed… As he moved on in life… shrapnel lodged in his body periodically shifted… and caused him long sieges of excruciating, debilitating pain and sometimes even paralysis… Nine pieces… were eventually surgically removed… but the pain remained a constant for the rest of his life.

“In 1987… activists began visiting congressional offices to make the case. Among them were… 442nd veterans… Rudy joined…prowling the halls of Congress on his crutches…”